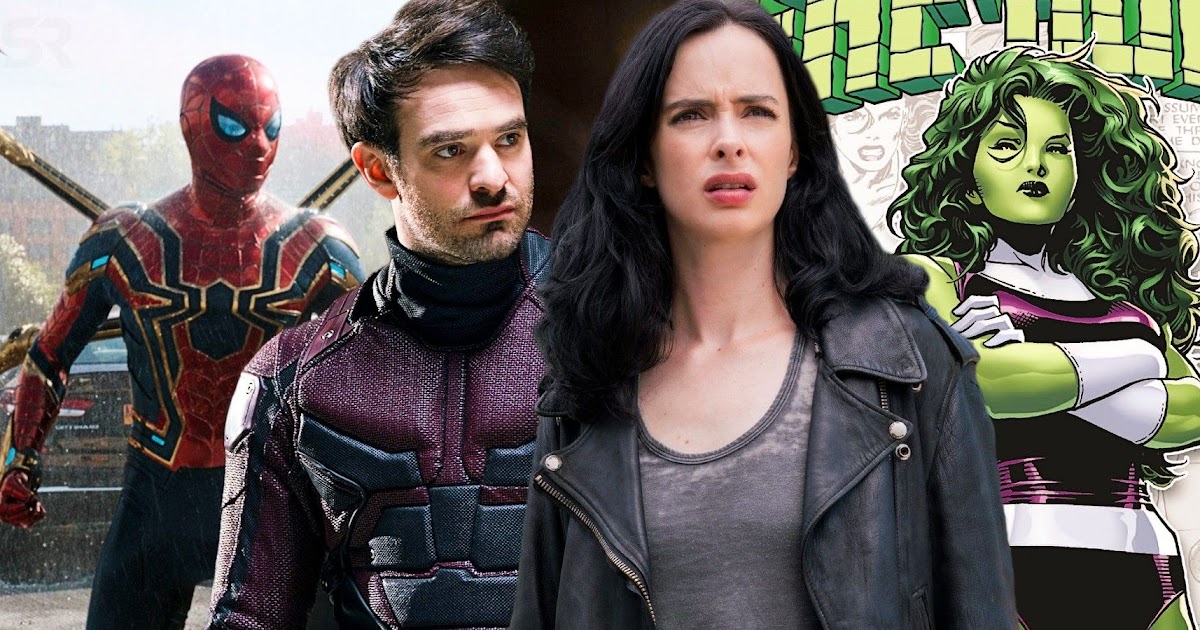 Netflix’s Defenders characters could be joining the Marvel Cinematic Universe at last and may feature in a number of different shows and feature films. Back when the MCU was truly taking off after The Avengers, Marvel TV and Netflix joined forces to create multiple Marvel shows that would culminate with a crossover event, The Defenders. Shows for Daredevil, Luke Cage, Jessica Jones, and Iron Fist entered development and were sold as taking place in the MCU. Now, these characters could be set to join forces with the wider franchise.

The original Marvel/Netflix shows launched with great success thanks to Daredevil and Jessica Jones, but the popularity of the universe continued to dwindle as time went on. One of the reasons viewers began to tune out may have been the lack of crossover between the shows and the MCU movies. This eventually led to Netflix slowly canceling all of its Marvel shows that existed within the Defenders universe. It began with Iron Fist‘s cancelation just a month after season 2 debuted, which was followed by Luke Cage being canceled a week later. While fans hoped this could be to set up a Heroes for Hire show, instead, Netflix eventually confirmed that Daredevil, Jessica Jones, and The Punisher were ending too. These cancelations left major storylines unresolved and seemed to indicate that their stories were over, along with any chance of a proper Defenders MCU crossover.

Several years have passed since any of the Defenders characters have been seen, but they might soon find a second life as part of official Marvel Studios productions. There are plenty of rumors about Kevin Feige figuring out a path for some, if not all, of The Defenders‘ characters/actors to return in Phase 4. If they do, it is not clear whether or not the MCU will establish the Netflix shows as canon or reboot the characters while retaining great casting choices of the past. Either option could work, although a reboot is cleaner for the MCU’s canon. In any case, Marvel has a big slate of movies and TV shows that each of the Defenders characters could appear in, but which ones are the best fit for the individual characters?

The bulk of the speculation surrounding the Defenders characters returning to the MCU stems from reports that Charlie Cox is in Spider-Man: No Way Home. He played Matt Murdock in three seasons of Daredevil and The Defenders. Fans theorized that Daredevil could appear in the movie shortly after Spider-Man: Far From Home ended with Peter Parker’s secret identity being revealed. It is still not confirmed that Cox is in the third solo film, but it is easy to see how Matt Murdock could fit. If Peter goes to court due to Mysterio blaming Spider-Man for the London attacks, he’d need a great lawyer to defend him. This can be where Matt – and maybe even Foggy Nelson and Karen Page – come into play. It might mean Cox’s MCU return doesn’t see him actually suit up as the Devil of Hell’s Kitchen, but that can happen later on.

Whether or not Daredevil is in Spider-Man: No Way Home, there are other opportunities for him to appear in Phase 4. The next best project that Daredevil could be involved in is She-Hulk. The Disney+ series starring Tatiana Maslany will explore Jennifer Walters’ legal career when she isn’t fighting bad guys as She-Hulk. It is possible that Matt Murdock may appear to help Walters with a current court case or even defend Walters if she is eventually put on trial. This would be a great connection for the MCU to make, as it puts Marvel’s two most prominent super-powered lawyers in the same property. It also allows She-Hulk to link with Daredevil’s story if his return in Spider-Man: No Way Home is minimal.

Marvel Studios could also look to bring Daredevil back for the upcoming Echo Disney+ show. Alaqua Cox is playing Maya Lopez in Hawkeye, and it has already been announced that a spinoff focusing on her character is in the works. Daredevil plays a huge role in Echo’s story in the comics, as he is framed by Kingpin to be responsible for the death of Echo’s father. This leads Echo to try and kill Daredevil out of revenge, only for him to reveal the truth about her father’s death. Echo is a chance for the MCU to bring this story to life and give Daredevil a prominent role once again.

Krysten Ritter plays Jessica Jones in three seasons of Jessica Jones on Netflix, and her opportunity to return as the private investigator in the MCU could be tied to She-Hulk. Although Jessica takes a very different approach to the law, she is still repeatedly connected to legal cases in some manner. There is no word on where She-Hulk will be set in the MCU, but Walters’ legal career has mostly taken place in New York after her start in Los Angeles. Jessica Jones founds Alias Investigations in New York as well, so there is an opportunity for the two to crossover in some fashion. There’s even the opportunity for Jessica and Jennifer to become friends for the MCU, as she did at one time consider hiring She-Hulk to be the nanny for Jessica Jones and Luke Cage’s baby.

Jessica Jones could even make a surprise appearance in Spider-Man: No Way Home potentially. After some time as a private investigator, Jessica took a job with the Daily Bugle as a vigilante analyst. She worked under J. Jonah Jameson at this time and with Ben Urich to create The Pulse. It is possible that after Spider-Man: No Way Home reverses Jameson’s public outing of Spider-Man’s secret identity that Jones could become the latest member of the Daily Bugle team to try and make it friendly to superheroes.

There’s also the opportunity for the character to appear in She-Hulk. When Luke Cage isn’t leading the Avengers in the comics, he is frequently in charge of Heroes for Hire. She-Hulk has been part of Heroes for Hire in the past, although her work for them was mostly legal and not fighting crime with her gamma strength. Still, Luke Cage and Heroes for Hire could make an appearance in She-Hulk to set up their MCU future. It could even give Marvel a chance to tease a romance between Luke and Jennifer, which was also short-lived in the comics.

Iron Fist’s MCU future is even more uncertain than the rest of the Defenders cast. While Cox’s Daredevil, Ritter’s Jessica Jones, and Colter’s Luke Cage are well-liked, most viewers disliked Finn Jones’ portrayal of Danny Rand. His efforts did improve as he got more time with the character, but Iron Fist still seems like the most likely of the Defenders to be recast for the MCU. Regardless of whether or not Finn Jones plays him in the MCU, there isn’t a great place for Iron Fist in the confirmed list of upcoming MCU projects. That said, Iron Fist could be a great possible fit for Shang-Chi 2 depending on its story. The martial arts and mystical franchise would be an excellent place to reboot The Living Weapon. Shang-Chi‘s depiction of Ta-Lo already mirrors K’un-Lun, so a visit to the magical city responsible for Iron Fist could be in store for the sequel.

Jon Bernthal’s Punisher joined the Defenders universe in Daredevil season 2, and the response to the character resulted in a spinoff show that lasted two seasons. Bernthal is primed to play Punisher again in the MCU, and many want to see this happen in Moon Knight. The Disney+ series stars Oscar Isaac as Marc Spector, who becomes Moon Knight after gaining superpowers from the Egyptian moon god Khonshu – or at least that’s what Marc thinks. Spector was a mercenary prior to his days as Moon Knight in the comics, so it is possible a similar origin in the MCU could be how Punisher appears. Frank could be an old friend of Marc’s potentially or be tasked with hunting down the all-white costumed vigilante.

In addition to the main Defenders characters, the MCU would also be wise to utilize a few other major characters from the Netflix Marvel shows. Vincent D’Onofrio’s Kingpin remains someone fans want to see more of, and there are rumors this could happen in Hawkeye. If that happens, Wilson Fisk could also come back for Echo and even battle Spider-Man one day potentially. Simone Missick’s Misty Knight was also a highlight of the Netflix shows, and Marvel could bring Misty back in Captain America 4, which could bring her and Sam’s romance to the big screen. It is also possible that Jessica Henwick’s Colleen Wing and Elodie Yung’s Elektra return, whether either comes in Shang-Chi 2 or Elektra returns for Echo.