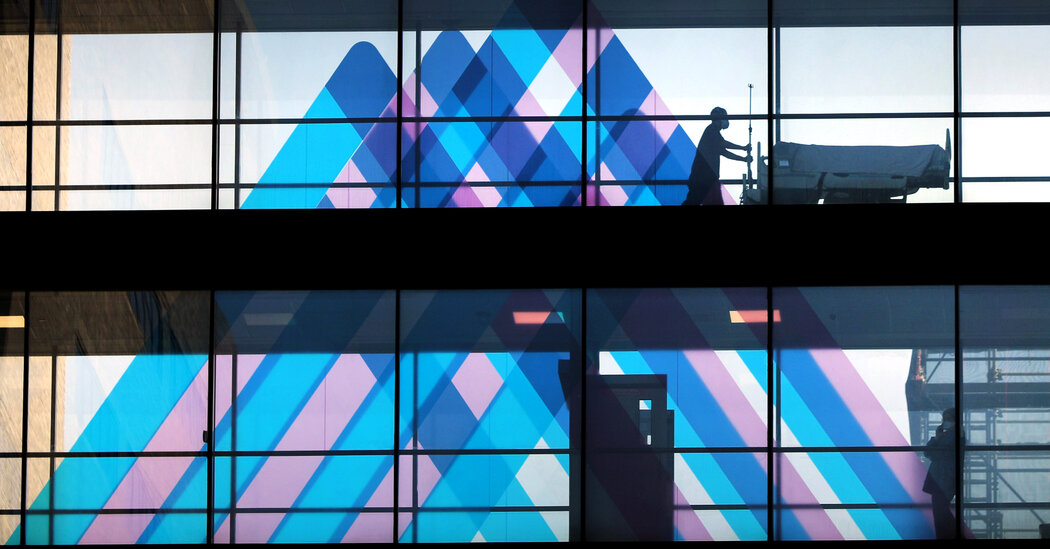 At one New York City hospital, coronavirus patients began arriving a few weeks ago from Brooklyn neighborhoods and nearby suburbs that have seen a resurgence of the virus.

But in contrast to March and April — when so many seriously ill New Yorkers flooded into the hospital, Mount Sinai, that a field hospital was erected nearby in Central Park — patients were showing up in smaller numbers and were often less sick. After treatment, they were going home.

“There is a much lower recent mortality rate,” said Dr. David Reich, the president of the hospital, despite the fact that the number of people being treated for Covid-19 had grown from the single digits in August to 56 on a given day last week.

As virus cases surge nationwide, hospitals around the country, particularly in rural areas of the Midwest, are seeing their largest uptick yet of critically ill patients. Some have begun to fill to capacity — an autumn wave of the pandemic that appears to get worse each day.

In New York City, hospitalizations have been slowly but steadily rising, eliciting painful memories of the surge of infections in the spring that killed more than 20,000 people. But the terrifying inundation of patients that overwhelmed hospitals then has yet to materialize again in New York City, even as cases rise.

Broad acceptance of face masks and social distancing has helped curb the spread of the virus, public health experts said. Fewer cases means fewer patients, allowing hospitals to better care for those who do come through the door.

And while there is no cure for Covid-19, doctors, nurses and other medical personnel in New York City have used their experiences during the spring surge to make significant improvements in hospital care.

Across the city’s public and private hospitals, patients with an illness serious enough to need treatment are given a diagnosis and cared for more quickly, spend less time on average in the hospital and are less likely to end up on mechanical ventilation, doctors and hospital executives said.

Fewer are dying: 139 people in the four weeks ending last Saturday. On the worst day during the spring, New York City recorded over 800 confirmed and probable deaths.

That trend has been mirrored in other parts of the country and world, as studies have begun to show lower death rates.

“You would expect there would be a lot more in the way of hospitalizations and deaths and, happily, there are not,” said Dr. Mitchell Katz, head of New York City’s public hospital system.

“How can I call that a second wave?”

Public health officials and epidemiologists had expected a resurgence of the virus in New York as the weather cooled, but many believed its impact would likely be less devastating than in the spring. Now, about 460 people are hospitalized in the city with Covid-19 — near the highest levels seen since late June. That is nowhere near the peak in April, when the virus patient count on one day was more than 12,000.

For now, patients who have been admitted tend to be doing better.

Lorenzo Paladino, an emergency room doctor at SUNY Downstate Medical Center in Brooklyn, recalled how during the spring, some patients were “dying at the door” as they entered the emergency department or going into cardiac arrest while in the ambulance bay.

Now, he said, patients tended to arrive in better shape.

One reason might be that patients are not waiting to go to the hospital, as they were encouraged to do by health authorities at the height of the pandemic in New York, when crowding was an issue and seemingly milder cases were turned away.

There are other factors, too. Nursing home patients today make up a smaller share of new cases, Dr. Katz said. And there are some indications that people being infected now tend to be younger on average than those in the spring, making them more likely to recover.

Once hospitalized, patients are faring better because doctors have a better idea of how to treat them, such as using dexamethasone, a steroid.

An NYU Langone Health study of more than 4,500 patients treated at its hospitals for Covid-19 from March to June found that outcomes began improving over time, even in the early months of the pandemic. At Mount Sinai, the mortality rate has similarly improved.

After a summer of low numbers, the tide of cases began to rise. By early October, Gov. Andrew M. Cuomo had ordered localized shutdowns of schools and businesses in parts of Brooklyn, Queens and the city’s northern suburbs.

New hospital admissions began to rise, too, nearly doubling from their low point in September to about 120 a day across New York State, according to state health officials. A large part of the increase came from the communities with the sharpest rise in cases.

But as of Sunday, fewer people were hospitalized in New York City than in the rest of the state, a reverse of the situation in the spring.

The new cases have not been evenly distributed among hospitals. Montefiore Medical Center in the Bronx has recorded only a slight rise in its coronavirus patient population. On Oct. 21, 32 people were hospitalized there, up from 30 two weeks earlier and 22 in early August.

But in some parts of Brooklyn, the ambulance sirens — after falling silent these past few months — seem to have returned. Maimonides Medical Center, near the epicenter of an outbreak in South Brooklyn, was treating 57 patients with Covid-19 in mid-October. In late summer, there were typically about a dozen virus patients there.

Doctors and public health experts expressed confidence that treatments that emerged earlier in the year had prepared hospitals to better help patients, while underscoring that social distancing and mask-wearing remained critical.

“It’s unlikely that New York City will experience again what it experienced in April and May,” said Dr. Eric Toner, a senior scholar at the Johns Hopkins Center for Health Security.

Out of 461 patients hospitalized on Tuesday in the city, 122 were being treated in intensive care units, according to state data. On the worst days in April, more than 3,100 patients were in the I.C.U.

Dr. Katz said he believed that a lower percentage of people with Covid-19 needed hospitalization now than in the spring. But he cautioned that it was hard to say for sure because testing was so limited then, and mild and moderate cases were far more likely to go undocumented.

On April 7, the city saw its largest death toll — 815 confirmed and probable deaths — along with 6,045 cases and more than 11,000 hospitalizations. On Oct. 21, the most recent date for which city data is complete, the city recorded four deaths and 591 cases. On that day, 454 people were hospitalized.

Dr. Katz listed a range of improvements that had helped patients at public hospitals, including a better understanding of when to put someone on a ventilator and improved use of blood thinners. Doctors have also seen the importance of turning Covid-19 patients onto their stomachs, a technique known as proning that helps distribute oxygen throughout the lungs.

Similar developments have taken place at private facilities. At NYU Langone Health hospitals, for example, the length of stay for most virus patients has been declining, fewer were being treated in the I.C.U. and fewer were dying.

“Quite frankly, there were things that were tried early on in the pandemic that we weren’t sure whether they were beneficial,” Dr. Fritz Francois, the chief medical officer at Langone, said. In some cases, he added, they “might have caused harm.”

For example, in the earliest days of the pandemic, hospitals in New York City tended to intubate patients early. Now, if possible, they avoid intubation, in which a mechanical ventilator breathes for a patient who is deeply sedated. Instead, doctors first attempt to give patients oxygen by less invasive means.

Hospitals are also better prepared to rapidly assess patients from the start; get reliable virus test results in as little as two hours; and make better-informed decisions about whether people need to be admitted, taken to the I.C.U. or provided some sort of oxygen support.

So far, doctors and nurses have been helped by the small number of cases, allowing them to focus more attention on each patient.

Like many health care workers, Dr. Ben McVane, who works in the emergency room at Elmhurst Hospital Center in Queens, had spent months bracing for the return of virus cases. More recently, some doctors have also begun to worry about flu season, and what simultaneous infections from both the flu and the coronavirus could do to patients.

In recent weeks, Dr. McVane said, there had been a small but noticeable uptick of Covid-19 patients at Elmhurst.

For the time being, he said, the increase of patients was manageable, even if it did bring to mind the dark days of the spring, when the hospital was one of the hardest hit in New York.

“For now, it’s more foreboding about what comes next,” he said.