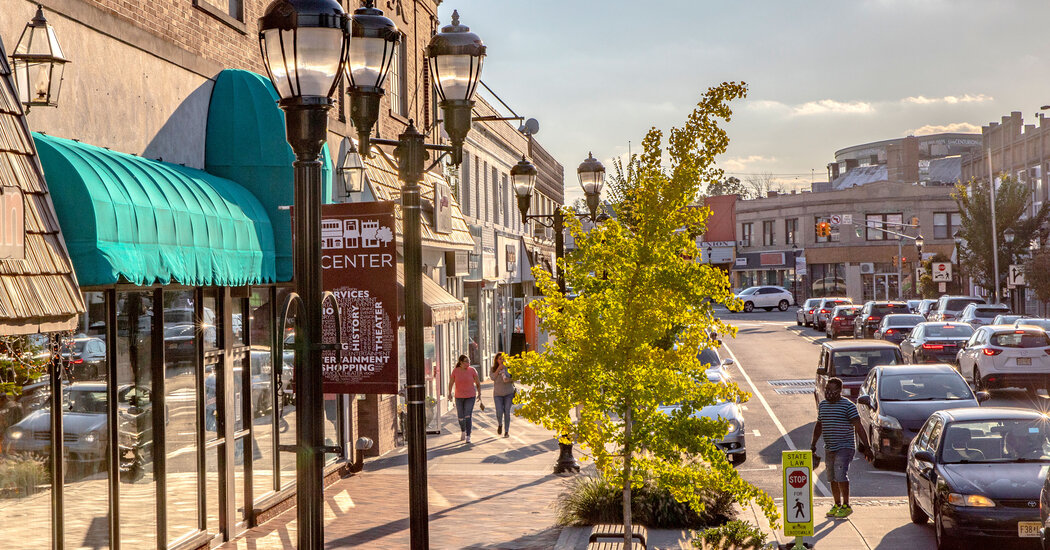 Marckens Pierre spent nearly three decades in Irvington, N.J., after his family moved there from Brooklyn when he was 6. But when he was ready to buy a home last year, though, he found himself crossing county lines to look at Union Township.

“I wanted to go somewhere a little more suburban, that was friendly, and with less crime. Union hit the bull’s-eye,” said Mr. Pierre, 36, who works as a school guidance counselor in East Orange, N.J.

At the same time, he wanted a place with a sense of urban life, and Union provided that, too.

“Covid has brought us a lot of buyers from New York and Brooklyn. And compared to city life, we’re definitely more suburban,” said Joan White, of White Realty Company, in Union Township. “It feels a little citified here, but you can still go home to a yard with green grass.”

That’s what Mr. Pierre found when he and his fiancée, Sunday Lima, toured 15 houses and settled on a 1938 three-bedroom colonial with two and a half bathrooms and “good bones,” which he bought for $294,000 in August. Since then, he has updated the kitchen and the bathrooms.

For many first-time buyers like Mr. Pierre, the nine-square-mile township on the northern border of Union County has it all: a variety of residential neighborhoods with many affordable housing options, a major university, an array of restaurants, local shops and big-box stores, easy commuting to New York City and Newark Liberty International Airport, and what some would argue are the best hot dogs in New Jersey.

Another selling point for Union? The township’s diversity. According to recent U.S. census data, a demographic breakdown of the township’s nearly 60,000 residents shows a population that is 48 percent white, 31 percent Black, 18 percent Hispanic and 10 percent Asian (some respondents check more than one box).

“It’s a place that honors difference, while bringing everyone together,” said Ms. White, 64, a lifelong resident. “If you don’t want to live among diversity, it is not the town for you.”

The overall population in Union has increased by 3 percent since the last official census in 2010, due in part to a number of new mixed-use developments. The township has been actively pursuing those projects, particularly since the pandemic hit, said Carlos N. Sanchez, the economic development director.

“It’s a race with our neighboring towns,” said Mr. Sanchez, citing 23 projects in the pipeline that would add 2,300 new rental apartments to Union Township when completed. “We know if we don’t put out the red carpet for the developers, there are five other towns knocking on their doors.”

Some fear that this attempt to duplicate the Jersey City or Hoboken growth model will change the nature of the township, but in a place where 75 percent of residents own their homes, Mr. Sanchez said, he is confident that the largely suburban identity will remain intact.

That suburban character was what attracted Jocelyn Schneider when she began looking to buy her first home earlier this year. A graphic designer for Walmart who was living in a 16th-floor apartment in Passaic, N.J., Ms. Schneider, 28, was excited to discover the choice of residential neighborhoods in Union. She paid $360,000 for a 1929 two-bedroom Cape Cod near Kawameeh Park, which she is currently moving into with her partner.

But she is also impressed by the new development. “Some may see all the construction as an inconvenience,” Ms. Schneider said. “I view it as making the town better. To see all this progress being made as we’re coming in is really aspirational.”

Union Township is divided into more than a dozen residential neighborhoods, identified by school districts, parks and golf courses. They vary by housing styles, community events and even street signs. (That’s how you know you’ve moved from the historic section of Putnam Manor, with its white wood signs, to the Fairway section, with its green signs.)

Many of these areas have neighborhood associations and hold their own block parties. But “despite these individual identities, the whole town feels like one big neighborhood,” said David Weisbrod, Joan White’s husband, who is also an agent with White Realty.

Many of the houses are split-levels, Cape Cods and small colonials on less than a quarter of an acre, and most were built in the 20th century. There are relatively few new houses, although the township’s commercial districts have been abuzz with activity.

In the center of the town, along a stretch of Stuyvesant Avenue with many ethnic restaurants, is one of the larger mixed-use projects, Centurion, which will eventually include 236 rental apartments. Another project, Vermella Union, is tucked between the train station and the Kean University campus. So far, 415 of the anticipated 1,350 luxury rental apartments have been completed, along with 35,000 square feet of retail space.

“The town had a lot going for it,” said Michael J. Pembroke, the chief operating officer for Russo Development, the project’s developer, explaining the choice of Union for the company’s largest project to date in New Jersey. “It’s got a strong residential base, a vibrant university and commuter corridor with a lot of foot traffic, and it’s so well located.”

With most houses ranging from $285,000 to $600,000, and lower property taxes than in neighboring Essex County, Union Township attracts the working middle class, said Joel Reyes, an agent with Striker Realty. “Buyers start in Hudson County and, discovering they can’t afford that, they work their way west, until they get here,” said Mr. Reyes, who lived in Union for 15 years.

Rents on units in the new developments start at around $1,850 for a studio apartment and go up to about $3,200 for a two-bedroom.

Before the pandemic, the township held numerous street and neighborhood festivals celebrating various ethnicities, with the participation of dozens of restaurants. This summer there were no festivals, but restaurants were at least able to expand their outdoor dining when many streets closed to car traffic, a pivot that Mr. Sanchez, the economic development director, said will likely become permanent.

While Union does not define itself as a college town, the centrally located 150-acre campus of Kean University offers many performances and lectures open to the public (or it did, pre-pandemic). The township also has two golf courses, the private Suburban Golf Club and the public Galloping Hill Golf Course.

And as for New Jersey’s best hot dog? Many would vote for the snapping-skinned wieners at the Galloping Hill Inn, a 95-year-old institution at the Five Points intersection.

Union has seven elementary schools: Six serve students in prekindergarten through fourth grade; one serves fifth graders. The township has two middle schools and one public high school, where about 2,155 students are enrolled. Union High School is noted for its drill team and performing arts programs, with area residents coming out for the highly regarded school plays.

Consequently, some Union residents opt to send their children to private schools like Union Catholic High School, in Scotch Plains, N.J., which serves about 800 students in ninth through 12th grade. Another option is one of Union County’s highly competitive specialized high schools, which focus on health sciences, technology and performing arts, and draw students from around the county.

Union Township, about 17 miles west of New York City, is close to several major highways, including Routes 78 and 22, and the Garden State Parkway.

New Jersey Transit provides train and bus service, with direct trains to Penn Station in New York City during midday hours, and a transfer through Newark during rush hours. The direct train takes about 30 minutes, while the transfer option can take up to 40 minutes. Tickets are $7.25 one way, or $210 for a monthly pass. Bus No. 114 goes from Union Center on Morris Avenue to Port Authority in Manhattan; the trip takes about 45 minutes and costs $7 for a single ticket or $199 for a monthly pass.

As one of the first school districts north of the Mason-Dixon line to face the loss of federal funding for violating the 1964 Civil Rights Act, the Union school district began busing students in the late 1960s from Jefferson Elementary School, a predominantly Black school in the Vauxhall neighborhood, to schools throughout the township. Later, the building was converted to serve just one grade, and all the township’s fifth-grade public school students now attend the school, sometimes referred to as Central Five.