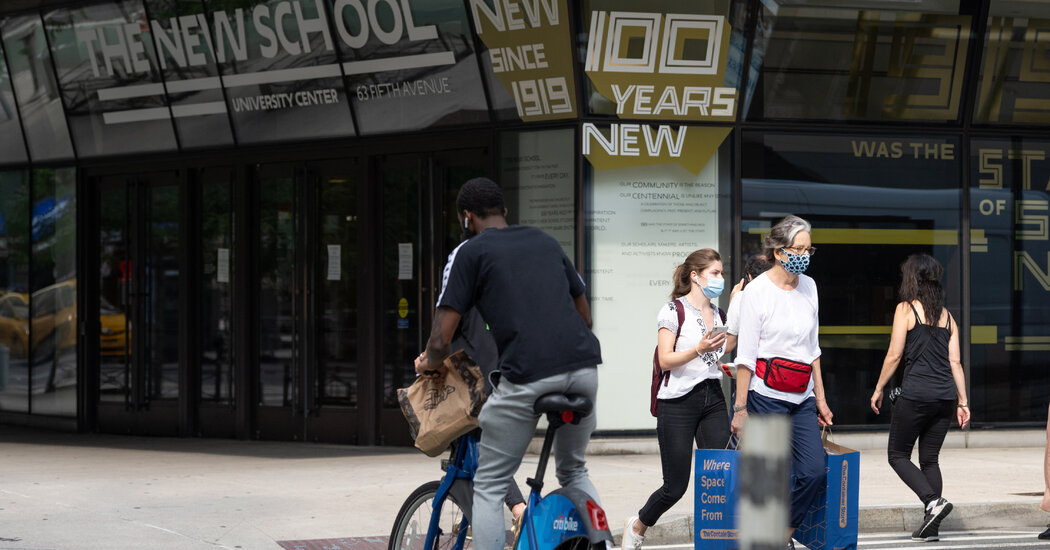 In recent weeks, faculty and staff have been in revolt over the implementation of cuts that seem to distribute the burdens of austerity unevenly. When Sanjay Reddy, an economics professor at the university, analyzed compensation data, he found that management salaries had increased by 45 percent between 2014 and 2019. During that same period, revenue increased only 17 percent.

In fact, Mr. Reddy’s data also show that as a proportion of endowment, in 2017 the president at the New School made far more than the president of Harvard. (The university counters that the compensation for its highest-paid employees — as a percentage of total salaries — has decreased over the last seven years.)

In April, the university announced that it was cutting the salaries of the leadership team by 12 percent — and the salary of the new president, Dwight McBride, who had the strange fate of beginning just that month, by 15 percent. But even with furloughs and slashes to retirement plans, this was not going to be enough to shore things up. So on Oct. 2, the New School laid off 122 employees — most of them low-level administrators and clerical workers in what struck faculty and staff as the deepest betrayal of the school’s principles.

A recent letter to the administration from students in the economics department pointed out, that the value of the president’s residence, a townhouse owned by the university for many years now worth roughly $15 million, would cover the salary of the recently terminated assistant in their division for 340 years.

In a video teach-in organized to convey the collective anger around staff reductions, Emerson Brathwaite, an assistant in the drama department, spoke about feeling discarded. “I am the only person of color in the administration at drama for the last 15 years,’’ he said as one of those who was laid off. “How do you guys preach EDI” — meaning equity, diversity and inclusion — “and you release the only person of color you have on your staff?”

A consistent source of grievance among faculty members has been the administration’s reluctance to mine their expertise to manage the current upheaval. This, too, has been perceived as an insult in light of the school’s conception as an engine of modern problem-solving. Instead, administrators hired a corporate consultancy called Huron, an outfit founded by former partners at Arthur Andersen, the accounting firm that collapsed in connection with the Enron scandal.

“The McKinsey-fication of everything is not helpful,’’ Rachel Sherman, the chair of the sociology department, told me. “We have departments full of economists and social scientists. I’m not saying let the theater department do this, or that we can dance our way to solvency.”