Height is height, right? Look at a Manhattan skyscraper, or the Washington Monument, or a mountain peak in California, and you imagine that it will be the same height tomorrow as it is today.

But across the United States, the heights of structures, landmarks, valleys, hills and just about everything else are about to change, at least with regard to average sea level. Most will get shorter. Parts of the Pacific Northwest will shrink by as much as five feet, and parts of Alaska by six-and-a-half, according to Juliana P. Blackwell, director of the National Geodetic Survey. Seattle will be 4.3 feet lower than it is now.

That’s because height is only height compared to a reference point — and geodesists, who calculate the Earth’s shape, size, gravitational field and orientation in space over time, are redefining the reference point, or vertical datum, from which height is derived. It is a fiendishly difficult math and physics task that, once completed, will have taken a decade and a half to accomplish.

“The U.S., at the scale that it is working at, it’s a big deal,” said Chris Rizos, president-elect of the International Union of Geodesy and Geophysics and an emeritus professor of geodesy at the University of New South Wales in Sydney, Australia.

The grand recalibration, called “height modernization,” is part of a broader effort within the National Oceanic and Atmospheric Administration, or NOAA, to establish more accurately where and how the United States physically sits on the planet. This new National Spatial Reference System, encompassing height, latitude, longitude and time, is expected to be rolled out in late 2022 or 2023, Ms. Blackwell said. It will replace reference systems from the 1980s that are slightly askew, having been derived from calculations that were done before the advent of supercomputers or global navigation satellite systems such as GPS.

The errors in height are magnified as one moves diagonally across the country from the southeast to the northwest. One of the few areas of the United States expected to either stay the same height or rise fractionally will be the toe of Florida. “There’s really a tilt that shows that all of the accumulated errors in our vertical network are pushed up into the northwest,” Ms. Blackwell said. 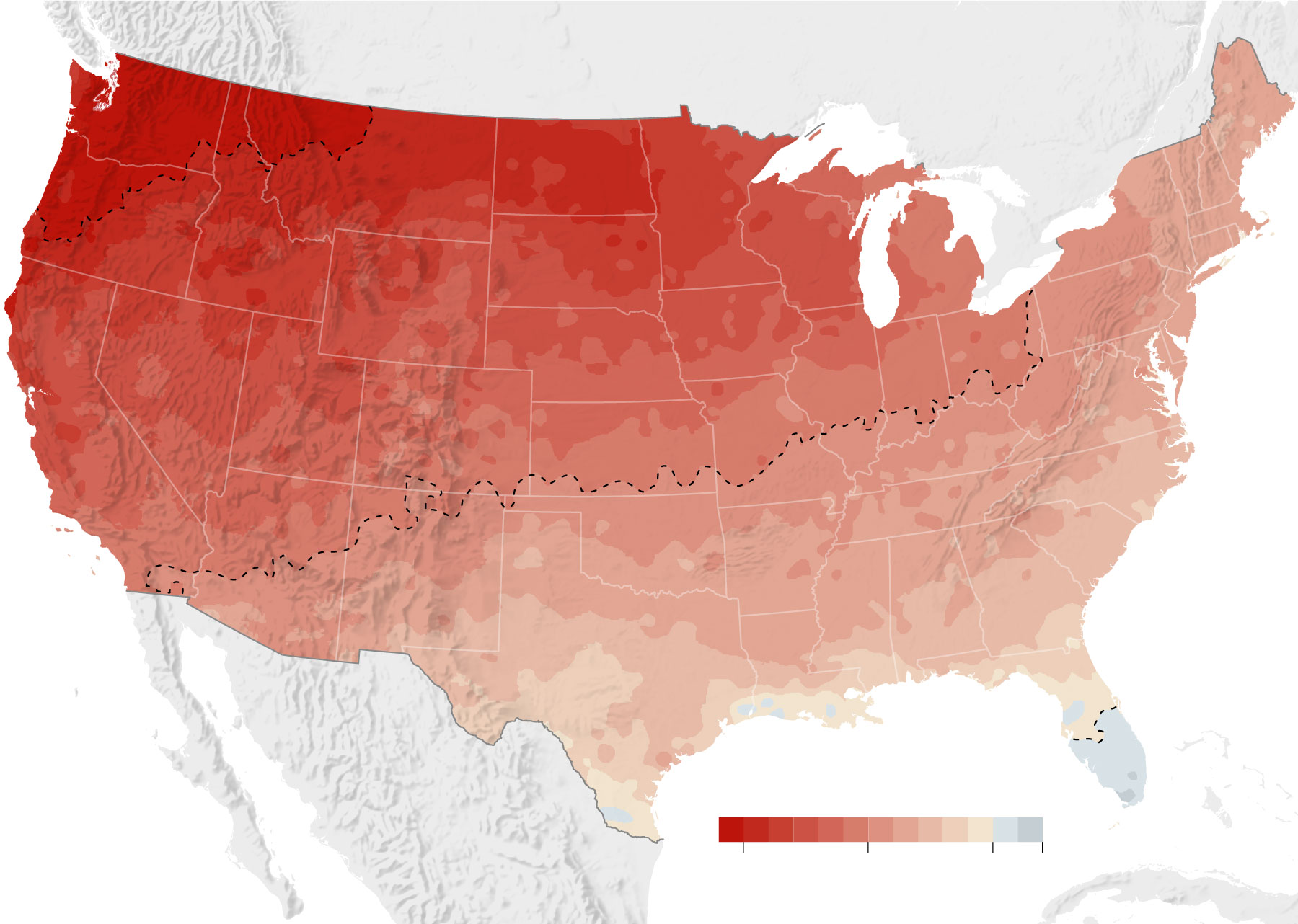 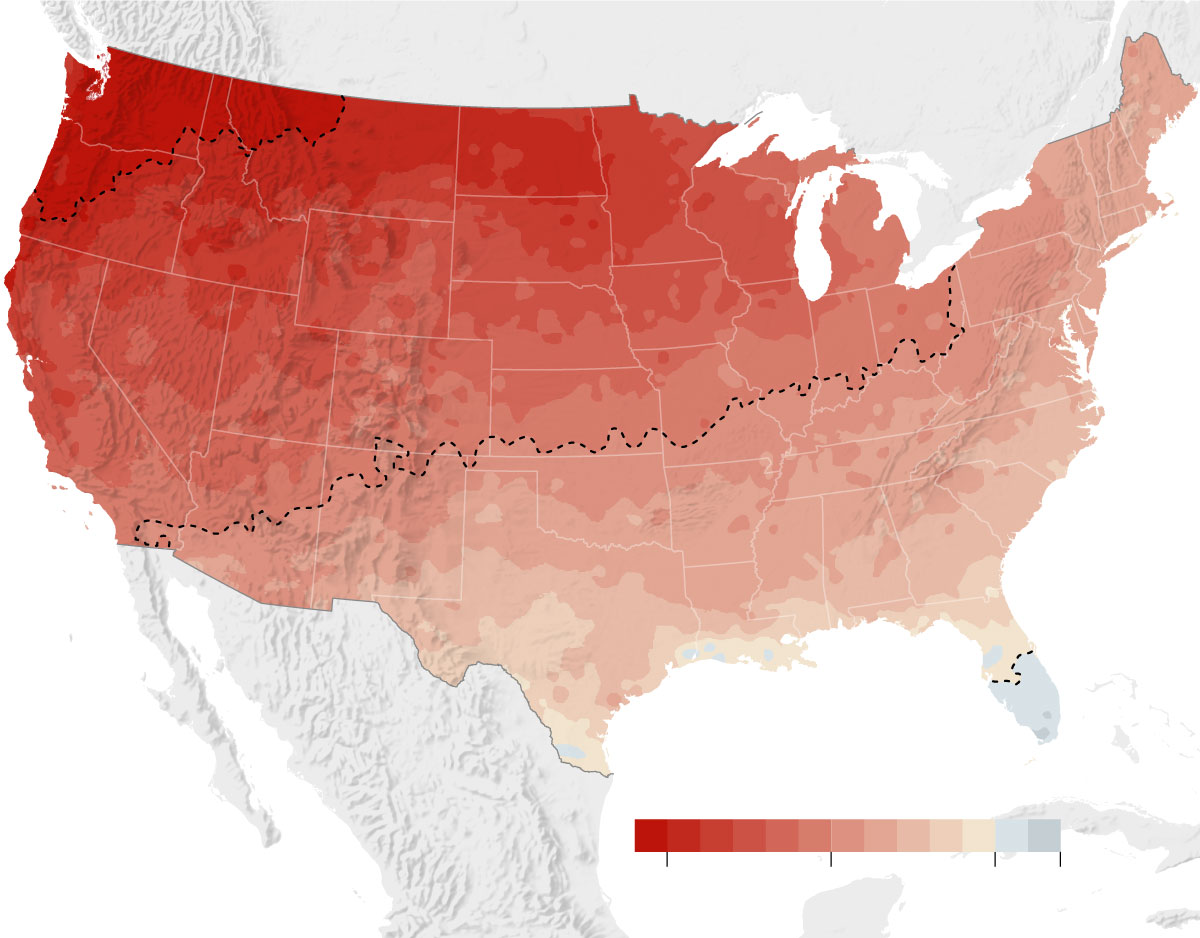 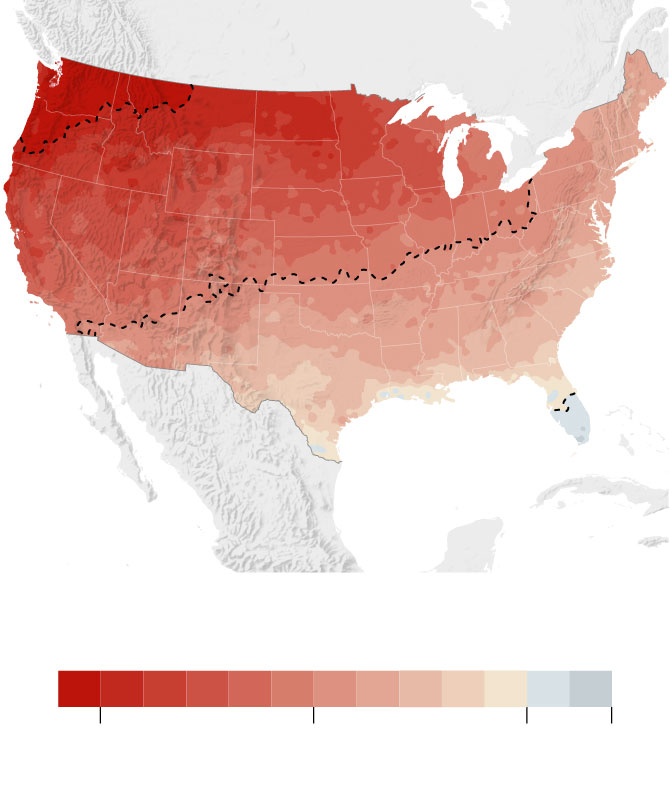 But height has long been tethered to ego. Some Coloradans worry that a few of their mountain peaks will fall below a bragging-rights threshold under the new height system, Ms. Blackwell said.

“They are very proud of how high these things are, and I know that it’s going to be a bit of a bummer if they start to be a little bit shorter than they were thought to be previously,” she said. She added that she is not yet sure precisely what the new measurements of Colorado’s peaks will be.

And near Beaumont, Tex., citizens are grappling with the unwelcome news that certain areas have subsided so much since previous height calculations that these regions now sit in the floodplain. As a result, some landowners may now need to insure themselves against losses from floods, said Daniel R. Roman, chief geodesist at NOAA. “They didn’t want to know that the heights had changed,” he said, “because when they do floodplain mapping, they’re like, ‘Well, I’m this height — it hasn’t changed.’”

A short history of height

The United States has been measuring its own height since 1807, when Thomas Jefferson, then the president, established the Survey of the Coast, forerunner to the National Geodetic Survey, to chart the waters and coasts on the Eastern Seaboard. The survey was the nation’s first civilian scientific agency, and had the aim of making shipping safer.

As the country expanded westward through the 19th century, so did the measuring, using the coast, a proxy for sea level, as the reference point for zero elevation. Surveyors planted metal benchmarks in the land as they traveled, describing each point’s height above sea level, often mile by mile. Anyone who wanted to measure the height of a building or hill measured it relative to the benchmark and, indirectly, to sea level.

Geodetic leveling, as the process was called, was painstaking and expensive. The rationale was to make sure heights were measured in the same way right across the country over time, rather than each county or state having its own system. For example, if engineers from two states were building a bridge across state lines, they needed to know it would meet in the middle.

And by 1900, geodesy had become even more sophisticated. Instead of using a coastline as the stand-in for sea level, geodesists developed a mathematical model representing sea level based on readings from tides. They have adjusted the height reference five times since then, in 1903, 1907, 1912, 1929 and 1988. The 1988 model remains the standard in both the United States and Mexico.

But the 1988 version was short on accurate information for California and parts of Texas and North Carolina, said David B. Zilkoski, a geodesist who is the former director of the National Geodetic Survey. That is because the crust there has moved up or down considerably, as a result of tectonic plate activity and the removal of oil, gas and water from beneath the ground.

The solution, Mr. Zilkoski decided, might be to use the global navigational satellite system technologies, such as GPS, that were then beginning to proliferate. GPS is excellent at pinpointing where you are in a flat, two-dimensional system — say, at the corner of Bank Street and Garden Avenue. But it is also capable of telling you where you are in a three-dimensional world: Bank Street and Garden Avenue at 40 feet above sea level. By the mid-1990s, Mr. Zilkoski said, the goal of using GPS to modernize height had caught on.

It had the advantage of being inexpensive and easy. Satellites, and therefore global positioning systems, measure height relative to a smoothed out mathematical approximation of the Earth’s shape called an ellipsoid. (Picture a basketball squished at the top and bottom.)

But there was a big catch. “GPS doesn’t know much about gravity,” said James L. Davis, a geophysicist at the Lamont-Doherty Earth Observatory of Columbia University in New York.

A matter of some gravity

Gravity matters to a geodesist. Height is distance measured along the direction that gravity points, and the strength and direction of gravity’s pull vary according to the density of what is beneath the terrain and near it. In other words, height is not merely distance or elevation above the ground; it is tied to gravity. Gravity, in turn, is related to the distribution of mass. Geodesists therefore use the term “height” rather than “elevation.”

“Whenever I give a public lecture on gravity, half the talk is getting them to think about it differently,” Dr. Davis said.

As a result, a height measured only by GPS could be badly inaccurate. An engineer who laid pipe only using GPS, without measuring local variations in the effect of gravity, might not get water to flow where it was supposed to go.

But making highly detailed measurements of the gravitational field, in order to factor them into heights captured by GPS, is no small task. In 2007, the National Geodetic Survey launched an ambitious mission — GRAV-D, for Gravity for the Redefinition of the American Vertical Datum — to accomplish just that.

Geodesists will then use these gravity readings to make a model that best represents average sea level everywhere in the world, even on land. Because the pull of gravity varies everywhere, this model, called the geoid, resembles a lumpy potato. All heights will subsequently be measured taking it into account.

Once the new height system is in place, people will find unexpected uses for it, Ms. Blackwell of the National Geodetic Survey said. She invoked “The Jetsons,” the futuristic animated television sitcom from the 1960s that featured cartoon characters zipping around their cities in tiny spacecraft. The underlying technology — the ability to calculate heights and other positional coordinates swiftly and accurately — was unimaginable at the time. Today, with the proliferation of drones, self-driving cars and remotely operated aerial systems, the ability to navigate accurately in three dimensions is becoming paramount. “I think it’s going to get adopted really quickly,” she said.

Even as geodesists get better at calculating the shape of the Earth, humans are changing it. As we warm the planet, we are melting glaciers and ice sheets. Their mass shifts from the land to the ocean, raising sea level and, eventually, changing height, which uses sea level as the reference for zero elevation. The shift in mass also has an impact on the configuration of the planet.

“That mass on the surface of Earth pushes down on Earth and actually changes its shape,” said Dr. Davis of Columbia University.

In effect, through climate change, our species is altering gravity across the planet. “We’re doing it by making chemical changes in the atmosphere that cause mass to be moved around,” Dr. Davis said. “And the amount of mass now is tremendous. It’s noticeable in the shape of the geoid. It’s also noticeable in the Earth’s rotation.”

Dr. Davis and other scientists are scrambling to figure out more accurately how to calculate the impact of the human footprint in the coming years.

“A few hundred years ago, it was all about what is the shape of the Earth,” he said. “And now it’s: Can we measure Earth’s changing shape, and the amount of mass in the glaciers, and where it came from, well enough to say what will happen at this location in the next few years? We’re in a race.”

SpaceX set to blast into new era of human spaceflight

Watch Live: SpaceX Falcon 9 launches US astronauts on a mission to ISS

12 Underknown Songs From the Region That Birthed Emo

DR. RASHID BUTTAR: THE CORONAVIRUS AGENDA – WHAT THE MAINSTREAM MEDIA...

Get Ready for a Vaccine Information War