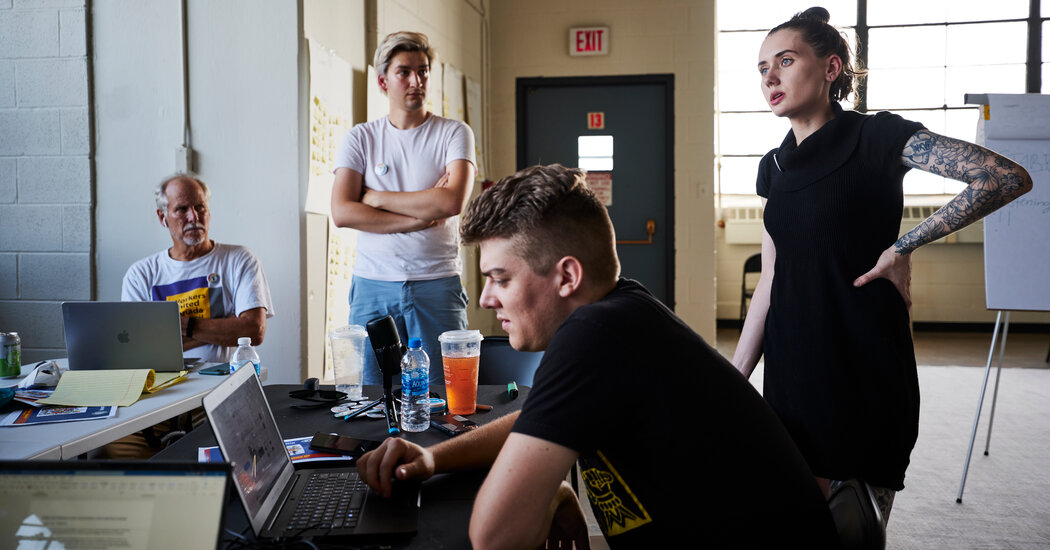 For years, Starbucks workers have complained about the company’s labor practices, saying that chronic understaffing has led to a chaotic work environment, erratic hours and difficulty taking sick days.

Despite periodic commitments by Starbucks to revise its policies, the complaints lingered and appeared to intensify during the pandemic, when overstretched workers also had to contend with new health concerns and safety protocols.

Now the longstanding frustrations are fueling one of the most serious union campaigns ever to confront the company, whose more than 8,000 corporate-owned locations in the United States are not unionized.

Last week, Starbucks workers in the Buffalo area announced that they were forming a union called Starbucks Workers United, and on Monday they said they had filed petitions from employees at three stores in the area asking the National Labor Relations Board to hold elections on union representation. They proposed a vote in two weeks.

“They could fix this or that issue, but there are always new things coming up,” said Brian Murray, a barista at a Starbucks in Buffalo. “The only way to have those resolved in the future is having a union, having democracy in the workplace.”

After the workers’ announcement last week about forming the union, Starbucks said in a statement, “We respect our partners’ right to organize but believe that they would not find it necessary given our pro-partner environment.”

The workers are seeking to hold elections store by store, each of which has about 20 to 30 eligible workers, though the company could push the labor board for a city- or districtwide vote.

At least 30 percent of eligible workers must sign union cards for a workplace to qualify for a vote. The union said that “strong majorities” had signed cards in each of the stores where workers are petitioning for a vote.

Alexis Rizzo, a shift supervisor at one of the stores, said that she had had periodic conversations over several years with organizers for Workers United, the union with which the Starbucks workers hope to affiliate, but that until recently the timing for a union campaign had not felt right. “With the pandemic and labor shortages — the fact that for once we’re not totally disposable, they need us — it was the perfect time,” Ms. Rizzo said.

She and several other workers said the pandemic exacerbated longstanding issues, such as the stress of understaffing, which became more acute as turnover and absenteeism increased and as workers were given additional responsibilities like sanitizing surfaces.

The workers said they felt pressure to come in when sick unless they could find a co-worker to replace them.

Starbucks workers accumulate paid leave as they work more hours, consistent with state law. The company gives workers paid leave for missed shifts over as much as two weeks if they test positive for Covid-19 or have had close contact with someone who tested positive. It says that it expects workers to stay home if they have Covid symptoms, and that they can receive sick pay during this time.

Ms. Rizzo said that about a month ago she overslept for work because she had been up the previous night vomiting. After her manager called to ask where she was, she recalled, she alerted him to her illness and he asked how quickly she could get to the store. “I go to work for an hour and they send me home because I keep throwing up,” she said. “I was like, ‘You told me to come in.’”

Several workers complained about the difficulty of meeting their performance metrics, which evaluate both the speed with which they serve customers and their ability to form a “customer connection.” They said this was particularly true in the TikTok era, when customers ask for elaborate drinks inspired by postings on the social media platform.

“I’ve had drinks that take two blenders to make — a Frappuccino with foam,” said Gianna Reeve, a shift supervisor in the Buffalo area. “I want to do that. But then I hear about how drive-through times are not fast enough. It’s hard to know what they want from us.”

And they expressed frustration that Starbucks did not appear to make worker safety a priority — first leaving it to baristas and shift supervisors to enforce masking policies, and then, as infection rates soared late last year, telling them that they shouldn’t bother requiring masks at all.

Reggie Borges, a company spokesman, said this change had come about as a result of listening to employees, who complained that Starbucks was putting them in a difficult position.

The union campaign comes at a moment when labor activists have enjoyed some high-profile successes in Buffalo, where a socialist candidate upset the city’s incumbent mayor in a recent Democratic primary. Workers United recently helped unionize several Buffalo-area locations of SPoT Coffee.

Nationally, there appears to be a recent uptick in labor activism as well, including a high-profile union election at an Amazon warehouse in Alabama; the formation of a so-called minority union by workers at Google; a strike in several states by workers at Mondelez International, the maker of Oreos and Chips Ahoy!; and a monthslong strike by coal miners in Alabama.

Starbucks has long cultivated a progressive image. The social-impact section of its website says the company “has always believed that we can balance profitability and a social conscience.” In 2018, it closed its U.S. stores for a four-hour anti-bias training session after an employee in Philadelphia called the police to report that two Black men refused to leave.

The company’s annual report cites its generosity toward rank-and-file workers, which it refers to as “partners,” calling them “significant contributors to our success as a global brand that leads with purpose.”

Many workers said that while they appreciated Starbucks’s relatively generous benefits — part-time workers are eligible for health care benefits and Starbucks pays the tuition of workers who are accepted to pursue an online degree at Arizona State University — they had been frustrated by the relative lack of seniority-based pay. A barista or shift supervisor who has worked at the company for five years typically makes only slightly more than someone who has been in the position for a month or two, the workers said.

Starbucks officials appear to have gone to great lengths at times to discourage unionizing. In June, an administrative law judge with the National Labor Relations Board ruled that the company had unlawfully fired two workers to thwart a union-organizing effort in Philadelphia and that it had spied on conversations that one of the workers had with colleagues. Starbucks has appealed the ruling.

While there is no union at any Starbucks-owned store in the United States, some stores that are owned and operated by other companies under licensing agreements are unionized.

After workers in Buffalo announced their union last week, they received a text message from a manager inviting them to one of several listening sessions on company time to “discuss what their experience with the company overall has been.” Mr. Borges, the Starbucks spokesman, said listening sessions were standard at the company’s U.S. stores.

“We proudly create the space and forums for open and honest conversation as it relates to establishing and maintaining a great work environment,” he said.

But several workers said the company has also stoked fear.

Kayla Sterner, a barista in the Buffalo area, said shift supervisors at her store who had previously discussed the store’s problems openly had become tense and uncommunicative after being called into a meeting with a manager last week. Mr. Murray said he and two other workers wearing union pins had been greeted with dirty looks from their manager during their shifts.

Mr. Murray said that the manager had since eased up but that workers continued to worry about a response that might be dictated by corporate headquarters. “Workers are scared,” he said. “They didn’t feel comfortable or safe signing a union card on the floor.”

To minimize the potential for intimidation, the worker organizing committee has written to Starbucks’s chief executive, Kevin Johnson, asking him to endorse a list of eight “fair election principles.” They include refraining from explicit and implicit threats against workers as they consider unionizing and allowing the union to hold meetings with workers on company time if management holds similar meetings.

In their letter, the committee members wrote that they were unionizing not in response to any particular policies but to achieve a “true partnership” with Starbucks. “We want the company to succeed and we want our work lives to be the best they can be,” the letter said.