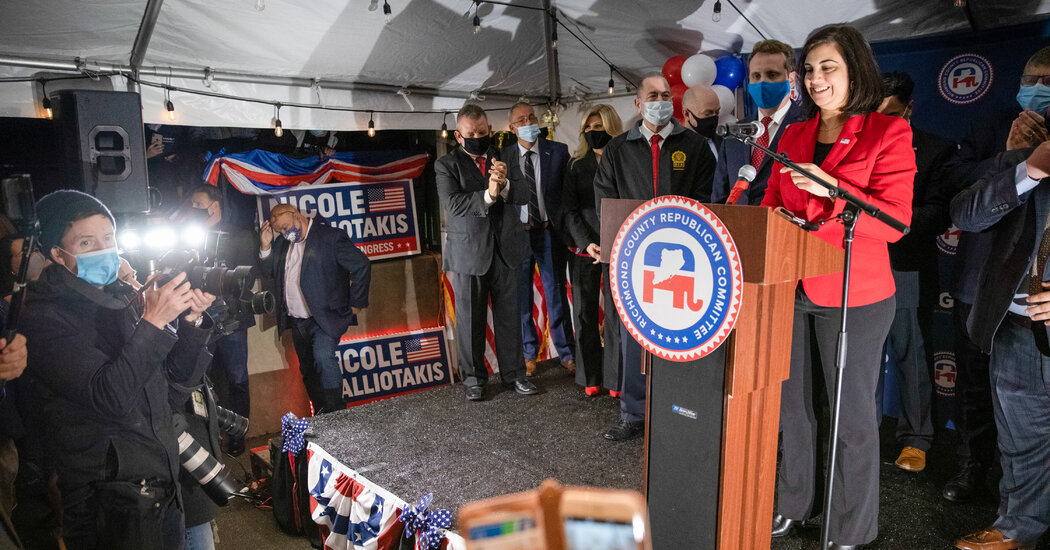 Heading into Election Day, Democrats in New York had high hopes across the ballot, with three House races targeted in a national “Red to Blue” campaign.

But by Wednesday morning, those hopes were greatly dimmed: The three Democratic candidates, all women, were far behind after the initial machine count of ballots.

Elsewhere in the state, two first-term Democratic congressmen, Max Rose and Anthony Brindisi, were in danger of losing their seats; just two years earlier, they had been hailed by their party as trailblazers who prevailed in districts traditionally held by Republicans.

And in the State Capitol, where Democrats harbored visions of a supermajority in the State Senate, the party seemed far from that goal and may even cede ground.

With more than one million mail-in ballots still to be counted in the state, final results were far from certain in many races. But the preliminary vote totals seemed to reflect a resurgence of Republican power in the New York suburbs, where at one time some Long Island towns were among the party’s biggest strongholds in the country.

The Republican hold seemed to wane in 2018, with Democrats taking seats in New York and similar suburban districts in other states. But on Tuesday, the tide seemed to turn back again, reflecting the Republicans’ success at ousting House incumbents in swing districts across the country.

That trend was mirrored nationally in results from statehouses, with the lowest number of chambers slated to change hands in more than half a century. While Democrats won both legislative houses in Arizona, they lost the House and Senate in New Hampshire.

While some Republican candidates sought to distance themselves from President Trump, whose popularity was thought to be waning, they still clung to a Trump-like law-and-order message.

They tied Democratic candidates to defunding the police and progressive radicalism in the party, a strategy that seemed to work in many parts of the nation, as Republicans sought to maintain control of the Senate and claw back some House seats.

Mr. Rose was targeted in a series of attack ads from the Congressional Leadership Fund that featured a group of men in police union shirts criticizing him for marching with demonstrators calling to defund police departments. In another ad, he was accused of associating with “cop haters.”

Similar strategies were employed by the Trump campaign and Republicans across the country, and Democrats, including former Vice President Joseph R. Biden, were initially slow to push back — a reluctance that some Democratic lawmakers and strategists warned would backfire.

Indeed, while Democrats will still control the House,Democratic incumbents lost races in Florida and South Carolina.

In New York, Nicole Malliotakis, a Republican state assemblywoman, declared victory in her contest against Mr. Rose, in a swing district encompassing Staten Island and parts of Brooklyn. In Long Island, Andrew Garbarino, a Republican, also proclaimed victory over Jackie Gordon, a veteran of the Army Reserve, in a race to replace Representative Peter King, the 14-term congressman who was retiring. Neither contest was called by The Associated Press.

Nick Langworthy, the chairman of the state Republican Party, said that the party’s performance was a rebuke of Democrats’ “extreme left-wing agenda” in Albany and beyond.

“President Trump campaigned on the same issues our candidates did,” Mr. Langworthy said in an afternoon news conference outside the State Capitol. “We’re going to see where things go nationally. But I think he was a tremendous boost for our candidates.”

In particular, many Republican candidates centered their campaigns on accusations that Democrats were undermining public safety, with many citing a bail reform law passed by state lawmakers last year.

“There is a very fine line that separates Republican and Democratic voters in the suburbs, but it seems that bail reform and a general denouncement of law enforcement was the final straw in 2020,” Joseph Borelli, a Republican city councilman from Staten Island, said in an interview on Wednesday.

Indeed, in Central New York, Claudia Tenney, a former Republican congresswoman and close ally of Mr. Trump running to reclaim her seat, harped on that theme in an election night speech; she was leading against Mr. Brindisi, a moderate Democrat who narrowly upset her in 2018.

“We are going to stand up against socialism, against chaos, against looting,” she told her supporters on Tuesday night. “We’re going to defend our police.”

The state is still a Democratic stronghold: No Republican has won statewide office since 2002; the state’s congressional delegation still remains overwhelmingly Democratic; and New York City leadership is dominated by Democrats.

Indeed, in districts with heavy Democratic representation, candidates did far better. Ritchie Torres, a city councilman representing the Bronx, and Mondaire Jones, a lawyer who lives in Rockland County, won their House races, and will become the first two openly gay Black members of Congress.

The left-leaning Working Families Party also appeared to retain its automatic ballot line in a battle that pitted progressive leaders against Gov. Andrew M. Cuomo, a Democrat in his third term.

Yet Democrats had hoped that a wave of anti-Trump support would help them across the state. Instead, Mr. Trump appeared to do well in many regions, and his criticism of New York City’s rising crime rate and disruption from Black Lives Matter protests may have resonated outside the city.

Democrats may have failed to outline a platform that appealed to moderate voters beyond a rejection of Mr. Trump, said Bruce Gyory, a Democratic strategist.

“You’ve got to be able to put a purposeful agenda that resonates with voters in the center,” he said.

Other factors were in play. There was a flood of nearly $5 million in outside spending across Long Island, much of it from Ronald S. Lauder, the cosmetics billionaire who supported Republicans.

Mr. Lauder was focused on recapturing State Senate seats for Republicans, and the campaign centered its ad blitz on what it perceived as overzealous bail reform laws that were endangering the streets.

State Senator Robert G. Ortt, the minority leader in Albany’s upper chamber, predicted that his conference would win four to six seats, leaving it short of regaining a 32-seat majority, but still positioning it for a more powerful negotiating position.

“You could almost feel the overconfidence from the other side,” said Mr. Ortt, who represents a Western New York district outside of Buffalo. “It was a reminder that New Yorkers decide the elections, not talking heads, not press people, and not even state senators.”

Democrats had hoped to gain enough votes to win a supermajority in the State Senate, which would give the Legislature a veto-proof majority against Mr. Cuomo, a Democrat who has not always seen eye-to-eye with some of the newer, more progressive lawmakers.

But Senate Democrats, who took control of that chamber after big wins in 2018, said that they still anticipated that absentee ballots would allow them to at least maintain their current 40-seat majority.

“We fully expected to win races where we were behind on election night,” said State Senator Michael Gianaris, the Queens Democratic who serves as the majority’s chief political strategist. “If you’re down a couple thousand votes on election night, you’re actually ahead when you factor in absentee ballots.”

In a district that includes Syracuse and nearby farmlands and that Hillary Clinton won in 2016, the Republican incumbent, John Katko, was thought to be vulnerable. The race — along with the two Long Island contests involving Mr. Zeldin and Mr. Garbarino — was among the three that the Democratic Congressional Campaign Committee had placed in its “Red to Blue” program.

The contest, pitting Mr. Katko against Dana Balter, an activist who teaches at Syracuse University, was one of the more expensive in the country.

Mr. Katko had endorsed President Trump earlier this year, but he repeatedly condemned the president’s rhetoric and went so far as to call him a “knucklehead” a few days ago. His guarded stance toward the president seemed to pay off: He held a large lead over Ms. Balter.

Other Republicans like Ms. Tenney did not shy away from President Trump, hoping to ride his coattails in a district that stretches from the southeastern shores of Lake Ontario to the northern Pennsylvania border. Ms. Tenney leads by about 28,400 votes, but that does not account for at least 45,000 absentee ballots that have yet to be counted.

In the Staten Island race, Ms. Malliotakis was leading Mr. Rose by about 37,000 votes. Mr. Rose said he would not concede until 52,000 absentee ballots were counted.

“This city has seen a significant shift to the left that’s made a lot of people uncomfortable in our community,” Ms. Malliotakis said in an interview on Wednesday. “I will be a voice that will provide a different perspective, and that’s where you get good policy — when you have a debate and hopefully end up somewhere in the middle.” 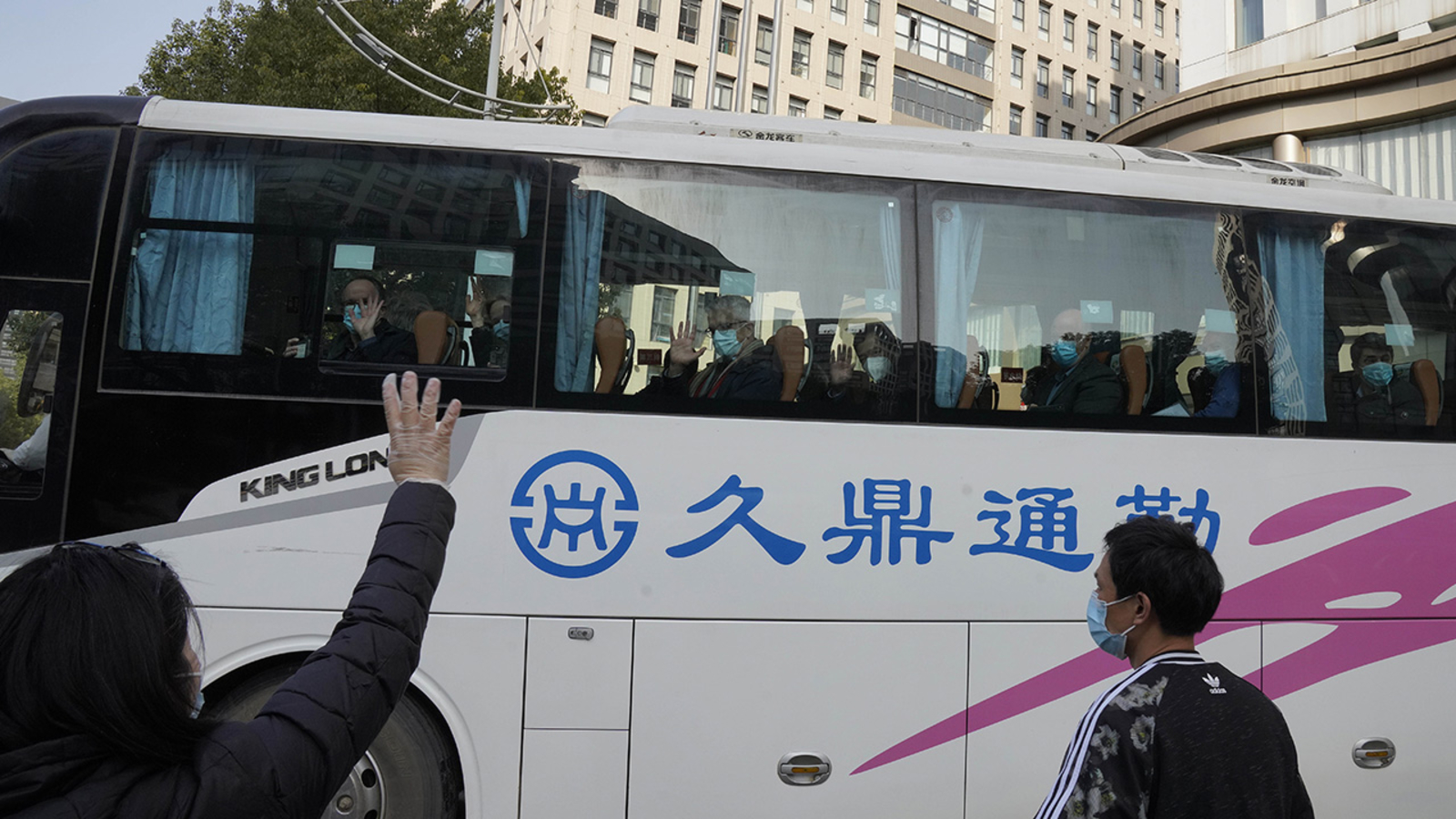 Wuhan investigation: How WHO experts will hunt for COVID origins in China How to Change Who Can Add You as a Friend

How to Change Who Can Add You as a Friend