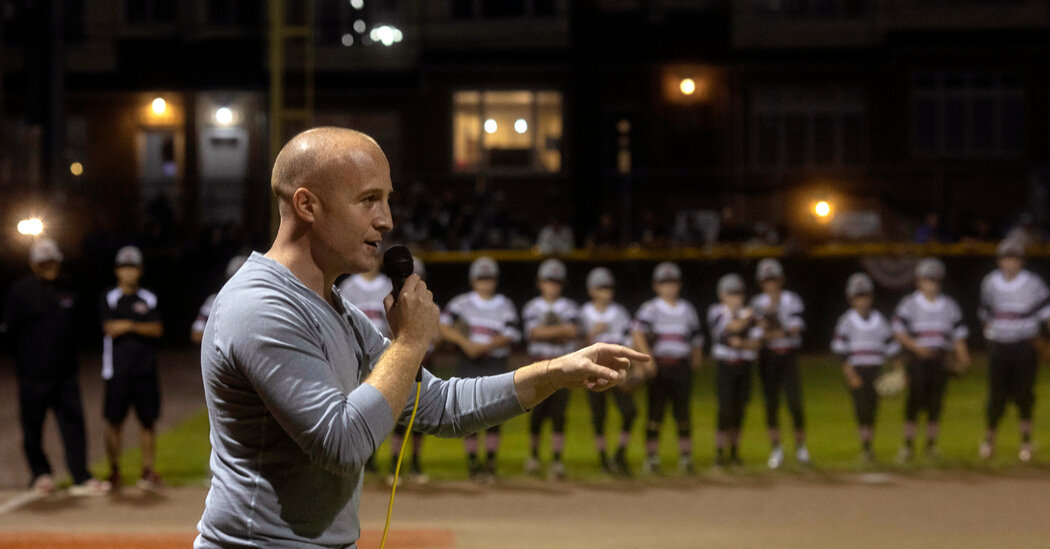 At just six seconds, the campaign ad has to be among the shortest and most blunt in political history.

Mr. Rose, a first-term congressman who represents Staten Island and part of South Brooklyn, is not running against Mr. de Blasio, his fellow Democrat.

But his criticism of the mayor underscores the challenge that Mr. Rose faces in his first re-election bid, a race that is the Republican Party’s only realistic chance for gaining a House seat in New York City in November.

His actual opponent is Nicole Malliotakis, a Republican member of the State Assembly who, by coincidence, challenged Mr. de Blasio unsuccessfully when he ran for re-election in 2017. But in a sense, Mr. Rose is running against both of them.

To win, Mr. Rose is likely to need some Republican support in a congressional district that is the most conservative in the city. And there may be no better way for him to accomplish that than to attack the mayor, who is deeply unpopular there.

The congressman, a U.S. Army veteran who served in Afghanistan, said that he has had dust-ups with the mayor on everything from the de Blasio administration’s inadequate support of veterans to indoor dining, and that he planned to continue to challenge the Mr. de Blasio over his constituents’ concerns.

That is not entirely true in Mr. Rose’s case.

In his successful 2018 run, when he beat the Republican incumbent, Daniel Donovan, Mr. Rose took shots at Mr. de Blasio, saying then that the mayor acted “like Staten Island doesn’t even exist.”

Ms. Malliotakis hopes to capture the votes of people who feel abandoned by the progressive politics of Ms. Ocasio-Cortez and other major Democratic leaders. She says she is running not just to represent her district, but to give New York City’s 500,000 registered Republicans a voice in Congress.

“There needs to be a balance in the city,” she said in an interview. “And I best represent that as one of the most vocal legislators who has put forward ideas and proposals to counter what they’re implementing.”

Ms. Malliotakis also criticized Mr. de Blasio, suggesting that if she were elected, she would try to use her position to make him more accountable for his actions.

The mayor, of course, is not the only prominent official casting a shadow over the race: Attitudes about President Trump, who won the district handily in 2016, may be a more meaningful litmus test for voters.

When Ms. Malliotakis ran for mayor, she tried to distance herself from Mr. Trump, saying that she regretted voting for him. She shows no such wariness now, championing the president’s policies and proudly boasting of his “complete and total endorsement.”

After Mr. Trump tested positive for Covid-19, she hosted a “get-well rally,” where over 2,500 people, masked and unmasked, shouted “four more years” and “U.S.A.!”

And when the president threatened in September to withhold federal aid to New York City because of civil unrest, Ms. Malliotakis applauded the plan, condemning the “radical far left policies” of Mr. de Blasio’s administration.

Mr. Rose, by contrast, was quick to criticize the president’s plan. He issued a statement likening it to the mayor’s support for cutting the Police Department’s budget.

Yet Mr. Rose has not been an ardent, or even consistent, critic of Mr. Trump, a rarity among Democrats. He initially opposed an impeachment inquiry, saying he believed it would sow political discord.

He eventually voted to impeach the president, persuaded that Mr. Trump’s dealings with Ukraine were inappropriate. And in an interview with Politico in April, Mr. Rose said he wanted nothing more than to see the president succeed in beating the coronavirus crisis — even if it meant that he won a second term in the White House.

Unlike some of his colleagues in the Democratic Party’s progressive wing, he opposes defunding the police. Instead, he favors increasing funding for the police — the New York Police Department, he said, should be the best-paid force in America — while at the same time supporting criminal justice reforms like a federal ban on chokeholds.

He said his first-term accomplishments included working on the 9/11 Victim Compensation Fund, increasing federal funding for opioid treatment and securing money for a sea wall to protect Staten Island’s eastern shore from the kind of damage that Hurricane Sandy caused.

If re-elected, Mr. Rose said he hoped to increase the number of union jobs in New York, to lead congressional efforts on counterterrorism and to improve the city’s infrastructure.

His platform is understandable: The district has slightly more registered Democrats than Republicans, but the difference — only about 80,000 people — is marginal compared with the rest of the city. The district has also traditionally voted Republican: Mr. Rose is only the second Democrat to hold the seat in 30 years.

Although Ms. Malliotakis won just 27.8 percent of the vote during her mayoral campaign, she won 70 percent on Staten Island, where she was born and which is largely Republican. (Mr. Rose was born in Brooklyn, and lives on Staten Island.)

She hopes to see that same support in November, though it seems likely that the president’s endorsement will scare off Democratic voters.

“The constituency votes for the person and not the party,” she said. “I’m comfortable that the majority of this community know me, they know my work, and they will vote for me, irrespective of who else they may be voting for that year.”

The contest bears some of the ugly hallmarks of a competitive race: Both candidates seem invested in exposing each other’s weaknesses.

A newsletter sign-up on Ms. Malliotakis’s website encourages voters to “Keep Informed About Max’s Hypocrisy,” which includes an allegation that he has accepted corporate PAC money despite a strict promise not to do so. (Mr. Rose denies the claim.)

Mr. Rose’s campaign has created a website focused on what it says are Ms. Malliotakis’s falsehoods, accusing her of Photoshopping herself into a photo of Covid relief efforts and reversing her policies on sanctuary cities and Mr. Trump’s proposed border wall. (Ms. Malliotakis denies these, as well.)

Besides the advantage of incumbency, Mr. Rose also enjoys a significant fund-raising edge: As of early October, he had raised over $7 million for his campaign, $2 million in the most recent quarter. Ms. Malliotakis had raised a fraction of that, receiving about $1.7 million overall. He had roughly $4 million more in cash on hand.

Andrea S. Morse, a registered Democrat who said she would vote for Mr. Rose, said she considered the contest, in the 11th Congressional District, a stand-in for the presidential campaign.

“The whole Trump agenda seems to be so filled with hate,” said Ms. Morse, a lawyer who lives on Staten Island. “It’s repellent. And I think Nicole apologized for him and she’s been a lackey on that whole agenda.”

Ms. Morse said it was understandable that Mr. Rose did not attack the president, given the number of Republicans in the district.

“He’s smart. He’s sensible,” she said of Mr. Rose. “I wouldn’t at all characterize him as a liberal Democrat, but he’s running in a very conservative district. You can’t fly in out here and say all kinds of things — you’re just going to repel people. He’s not running in Park Slope.”

Both candidates view public safety as a chief concern for the electorate, particularly involving matters related to the Police Department.

Ms. Malliotakis, who has been endorsed by five police unions, expressed concern about the rise in violent crime over the summer.

“People should look toward those sorts of endorsements more than ever, because the cops know who has their back and Max Rose doesn’t,” said Nick Langworthy, the New York State Republican Committee chair. “And if we don’t have strong policing, we don’t have a society.”

The only thing the candidates seem to agree on wholeheartedly is their distaste for the mayor.

Maureen Donnelly, a Staten Island voter who typically votes Republican, but she conceded that she was charmed by Mr. Rose’s blunt criticism of the mayor.

“I don’t think anybody can stop what de Blasio has done in New York,” said Ms. Donnelly, who pointed to the lockdown and high crime rates as some of her complaints. “They can only fix it after he’s gone.”