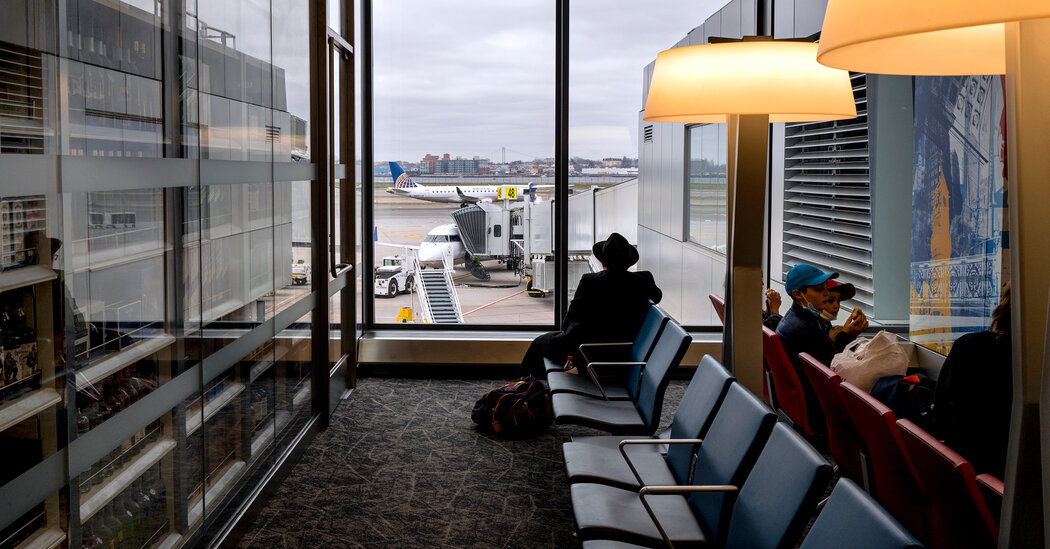 The brakes have officially been slammed on the plan to build a $2.1 billion AirTrain to La Guardia Airport.

The agency that operates the airport, the Port Authority of New York and New Jersey, said on Tuesday afternoon that it would “pause further action” on the project, which had been heavily pushed by former Gov. Andrew M. Cuomo.

Mr. Cuomo’s successor, Gov. Kathy Hochul, has called for a review of alternatives to the AirTrain plan, which has been a target of criticism from community groups and elected officials.

Among the complaints were that its out-of-the-way route would deter riders and that it would harm property values in the neighborhoods that surround La Guardia in northern Queens.

Despite those objections, the Federal Aviation Administration gave its approval to the AirTrain plan in late July, clearing the way for the Port Authority to proceed.

But three weeks ago, two Queens-based community groups and Riverkeeper, an environmental group, sued to stop the project, arguing that the F.A.A. eliminated some alternatives without giving them proper consideration.

The groups also asked the F.A.A. to suspend its approval of the project. The F.A.A. gave the Port Authority until Tuesday to argue against the granting of a stay. The agency argued, in part, that the pause for the review Ms. Hochul demanded made a stay unnecessary.

“At Governor Hochul’s request, the Port Authority is undertaking a thorough review of potential alternative mass transit options to La Guardia Airport,” the agency said in a statement on Tuesday afternoon. “The agency will work in close consultation with independent experts and stakeholders, and will complete its work as expeditiously as possible, consistent with the need for the review to be thorough and rigorous.”

Michael Dulong, senior attorney for Riverkeeper, welcomed the review. “We are seeking the best transit alternative for the region and the one that has the least impact on local communities and the environment,” Mr. Dulong said.

Ms. Hochul’s office did not immediately respond to a request for comment.

In calling last week for a review of “alternative mass transit solutions” that would reduce car traffic and increase access to the airport, Ms. Hochul said, “We must ensure that our transportation projects are bold, visionary, and serve the needs of New Yorkers.”

Before Mr. Cuomo abruptly resigned this summer after a state report found that he had sexually harassed multiple women, he had pressed the Port Authority to develop a rail link to La Guardia.

The airport’s ongoing overhaul was one of the governor’s pet projects. While he was in office, few other elected officials publicly opposed the AirTrain plan, even as the estimated cost ballooned from $450 million to $2.1 billion in just a few years.

All of its funding was going to come from the Port Authority, which is jointly controlled by the governors of New York and New Jersey, and fees added to airplane tickets. AirTrain riders would be charged a fare, as they are on the AirTrain at Kennedy International Airport. The current price to ride is $7.75.

But once Mr. Cuomo was out of power, some elected officials were emboldened to call for the AirTrain plan to be reconsidered, or scrapped altogether.

“All along, we were dealing with an aberrant situation: a governor who would not work with anyone, who created a culture of fear, who rushed through projects whether good or bad,” Mayor Bill de Blasio told reporters during a recent briefing at City Hall. “And now we get a chance to look at this thing in the clear light of day.”

One of the most common criticisms of the project was its so-called wrong-way route. To get to Manhattan, arriving travelers would have to head further east, away from the airport, to a station near Citi Field before they could double back on the No. 7 subway line or the Long Island Rail Road.

Critics have also said that the escalating costs would make the project one of the most expensive rail lines in the world.

In its defense, Port Authority officials emphasized that the chosen line running along the Grand Central Parkway from Willets Point would be the least disruptive to residential neighborhoods. Alternatives, including an extension of the N subway line from Astoria, would require the taking of private property, they said.

Along with the subway extension, which would likely have to be built by the financially troubled Metropolitan Transportation Authority, other alternatives include express bus service, ferries or an AirTrain with a more direct route.