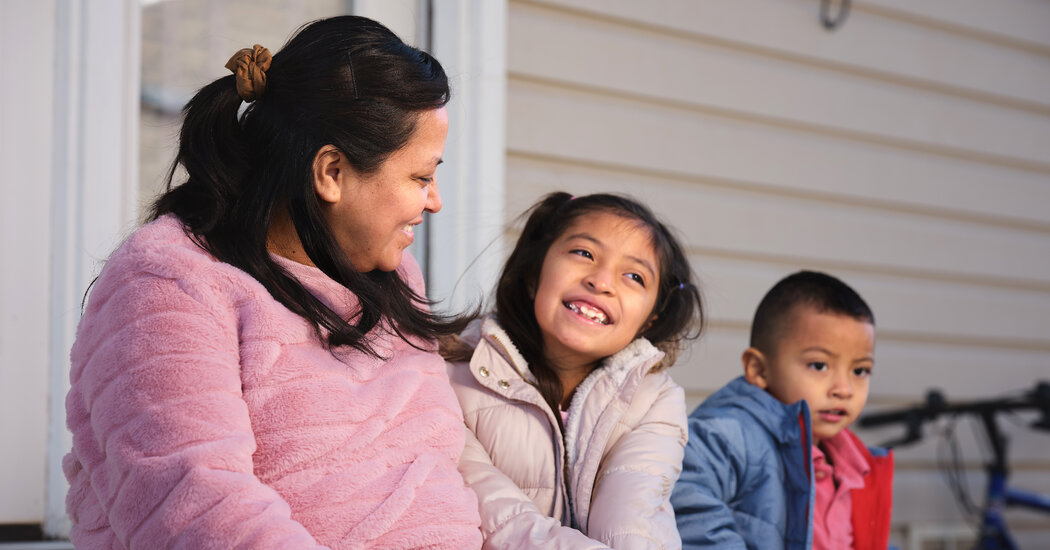 When he was a year and a half, her son, Ian, loved to watch videos of dinosaurs, and could mimic the screeching and snarling he heard — but nothing more. By the time he was nearly 3, he still couldn’t say any words, and Mrs. Molina de Maldonado became distressed.

“Dinosaurs don’t talk,” she said in a recent interview in Spanish. “And I noticed that he didn’t want to either. I became worried that something was very wrong.”

Two months before the coronavirus pandemic hit the United States, Ms. Molina de Maldonado enrolled Ian in speech therapy classes. When the school shuttered, she was worried his education would languish.

At the time, she had only seven books at home, she said, and they weren’t at Ian’s reading level. But a few weeks after lockdown began, she was able to bring home some new books for Ian, who fell in love with “Mowgli’s Rainy Day,” a story set in the world of “The Jungle Book,” and “Patitas Sucias,” or “Dirty Paws,” which follows the shenanigans of a messy dog.

The family read to him several times a day and Ms. Molina de Maldonado worked with him using materials from his speech therapy classes. By the time she took him back to his Head Start program in May, he could say a few words like “mama,” “banana” and “snack.” A few more months of classes and reading at home, and Ian could speak in short sentences.

“For Ian, who couldn’t speak, the books helped him develop his language and use short words, not just sounds,” said Ms. Molina de Maldonado, 37. “He still makes the dinosaur sounds sometimes when he speaks, but every day it’s less and less.”

The books for Ian were provided thanks to a collaboration among First Book, an organization supported by the The New York Times Neediest Cases Fund; UnidosUS, a nonprofit focused on Latino communities; and Pi Beta Phi Fraternity for Women. Under the initiative, the books, in Spanish and English, were distributed to several Head Start programs for migrant families, including Centro de la Familia in Salt Lake City, where Ian received speech therapy, as well as sites in Washington, Florida and North Carolina.

The coronavirus has disproportionally affected migrant communities in the United States (nearly Ms. Molina de Maldonado’s entire family recently tested positive for the virus, she said). First Book wanted to reach children in these communities, who often face intermittent schooling and a lack of educational resources. The pandemic has intensified these obstacles, and something as basic as access to books in the home can help fill that gap.

In 2016, Ms. Molina de Maldonado moved to the United States from Guatemala and began working in a food packaging plant near Santaquin, Utah, while her husband operated a tractor on a nearby alfalfa ranch.

Long days packing bags with chips and candy wore on Ms. Molina de Maldonado, so she began working as a cleaner at Centro de la Familia in 2017 and is now an assistant teacher.

The parents from the school often pool resources to hire one babysitter to care for children from multiple families while they work. For them, remote learning was particularly difficult, and near impossible if the home didn’t have an internet connection or if electronic devices weren’t available.

When the center closed in March because of the pandemic, Ms. Molina de Maldonado and other teachers, like Emma Mireya Lopez, delivered hundreds of books to their students through support from First Book, UnidosUS and the Pi Beta Phi Fraternity for Women.

“It’s a way for us to stay connected to the students,” Ms. Lopez said. “It’s important for the children to know that we still care about their education, even if we’re far away.”

The International Rescue Committee, another organization supported by The Fund, shifted its programming in Seattle to keep students’ learning on track. The agency, which assists refugees and other immigrants in rebuilding their lives in the United States, compiled and distributed school supplies and worked with parents on digital literacy so they could help oversee remote learning at home.

In place of its in-person after school programs, the International Rescue Committee opened online reading rooms and posted hundreds of books and reading assignments. It is now offering more individual tutoring and facilitating virtual group workshops, where students can connect with their peers.

Fatema Noori, 18, who moved to the Seattle area in 2019 from Kabul, Afghanistan, said the organization kept her on track to attend college. It helped her apply for and secure financial aid, and after she tested positive for Covid-19, staff members helped her navigate paperwork from her employer so she could still receive her paycheck.

Ms. Noori said that whenever she had an issue, the group’s message was always the same: “We can solve it together.”

Tahira Aziz, 12, also moved to the Seattle area from Kabul, arriving in 2018 with her parents and six of her siblings. Her father, Aziz Ahmad Zaheer, 48, deeply values education and worked as a cultural adviser and interpreter with the U.S. forces in Afghanistan. He would bring home books given to him by American military colleagues — like “A Thousand Splendid Suns” — and translate them for his children.

Tahira, who likes Harry Potter books and wants to become an artist, said she prefers school in the United States because in Afghanistan, girls are often shamed for going to school.

She said she was frustrated when the pandemic hit because she didn’t know how to use Zoom and missed a lot of meetings — until the International Rescue Committee trained her family in how to connect.

Since then, she said, school during the pandemic has been great.

“The good thing about it,” she said, “is that we can just learn. We don’t have to stop learning.”