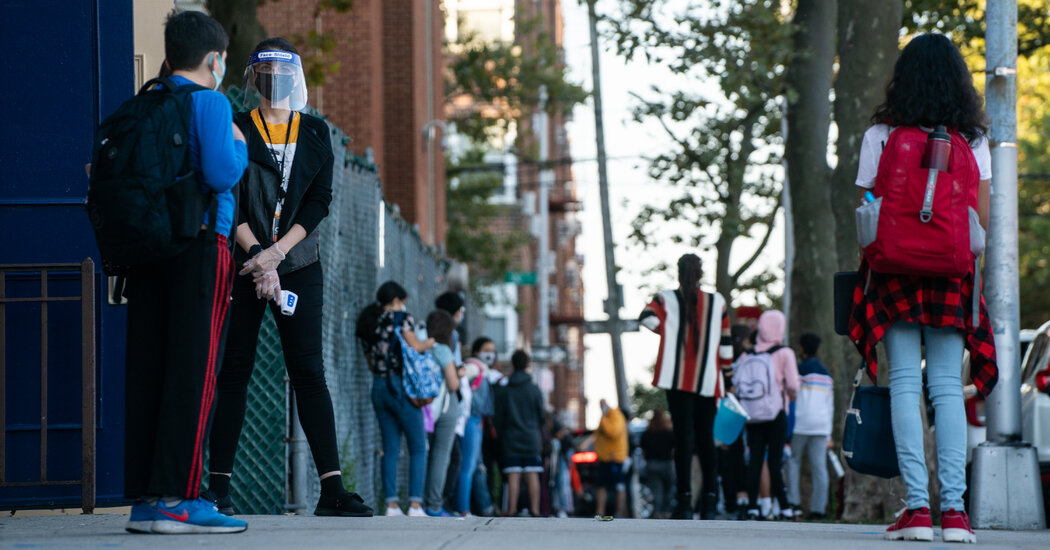 Mr. de Blasio has said that he pushed for in-person classes because a vast majority of city parents wanted him to do so. Yet despite his efforts, more than 500,000 of the 1.1 million children in the system, the nation’s largest, elected to start the year last month with online classes only.

Now it is clear that even more families than expected have opted out of in-person instruction, with new data showing that about 283,000 children have shown up.

“This is a number that needs to be understood as a work in progress,” Mr. de Blasio said during a news conference. “A lot more kids could be attending in person,” he added, “and we want to make sure that their families know and they know that school is safe.”

The city is facing a major test: Convincing families that it is safe, and educationally sound, to send children into classrooms during the coronavirus pandemic. Those who started the year remote-only have until Nov. 15 to opt back in to classroom learning, with those children resuming in-person classes on Nov. 30.

If children do not return in significant numbers later this fall, it would severely undercut the mayor’s push to reopen, an ambitious yet fraught effort that faced strong political headwinds from union leaders, rank-and-file educators and some parents.

The mayor said he expected many more students to opt back in, in part because random testing in city schools had resulted in a remarkably low positivity rate of .15 percent as of last week.

The city had initially said that families could opt back in once a quarter, but the schools chancellor, Richard A. Carranza said on Monday that was no longer an option.

New York City is one of a few large districts nationally that have welcomed children back into classrooms this fall, and there are still more students attending classes in person than in nearly any other city in the country.

The city has roughly 1,800 schools, making the herculean task of reopening the most closely watched in America. Cities in particular have struggled with the question, with some tentatively reopening for younger students and others opting to remain all remote.

San Francisco, for example, recently announced that it would not reopen at all this calendar year, and Boston froze its reopening plan last week after virus cases spiked there.

In New York City, the trend among parents has been away from returning children to classrooms. Since July, when just one-in-four families indicated that they would start the year remote-only, hundreds of thousands of additional parents have decided to keep their children home.

Though about 220,000 children whom the city expected to return to classrooms stayed home, schools still monitored at least some of their attendance online. It was not yet clear how many of those students had not appeared for in-person or remote classes.

The city has raised the bar for attendance since the first months of remote learning this spring, when students only had to answer a survey question in the morning to be marked as present. Now, children have to complete assignments or be present for live remote instruction. The mayor said the city would work to raise attendance rates over the next few weeks.

Mr. de Blasio’s claim that many students will opt back into hybrid instruction in the coming few weeks has been backed up by some educators.

About 65 percent of students at the East New York Elementary School of Excellence in Brooklyn started the school year remote-only. But Janet Huger-Johnson, the school’s principal, said she had heard from many of families who live in homeless shelters, and from parents of students with disabilities, that they planned to resume in-person classes next month.

“I know the parents that are going to opt back in,” she said. “It won’t be a big surprise to me.”

Interviews with dozens of city parents over the last few months showed that there was no single reason that so many families started the school year with remote classes only.

Some parents said they would not return until there was a vaccine, regardless of how low transmission was in city schools. Others said they did not believe a few days of in-person school a week was worth it, especially after the city announced late in the summer that it could no longer guarantee daily remote live instruction for students who selected hybrid learning.

Because some children are able to attend school only once a week, some families also say remote-only at least provides some consistency. Parents also said they wanted to see how the first few weeks of school went before making a decision for their own child.

A significant number of schools, including many large high schools, asked all students to choose remote-only if they were able, in order for the schools to address a staffing shortage created by an August deal between the city and the teachers’ union. In those schools, tiny percentages of students have reported to classrooms.

The city’s messy effort to reopen schools has also been deeply discouraging for many families.

Mr. de Blasio was forced to twice delay the start of in-person classes after union leaders and educators said there was not enough staff to provide instruction in classrooms or online.