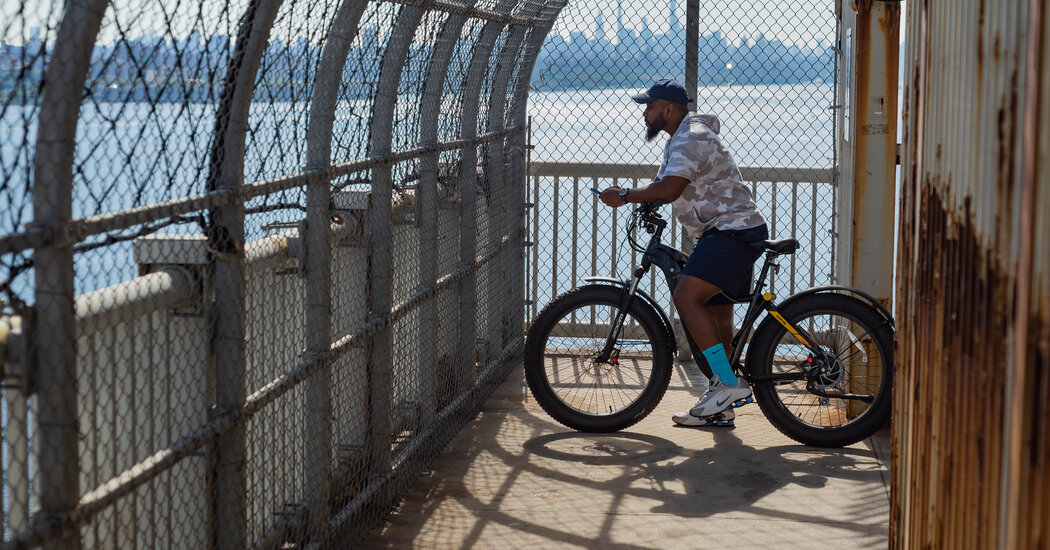 Towering majestically above the Hudson River, the George Washington Bridge is a remarkable feat of engineering to some. For others, it is a snarled, trafficky headache.

For a few cagey gamblers from New York, the mighty span is the most convenient sports book and casino in the region.

You can spot them, especially on autumn Sundays, sitting by their bicycles, scooters and Vespas on the New Jersey side of the bridge, staring at their phones as they process the numbers on their screens.

The Packers minus 6½ points. The over/under in the Giants game. The Patriots to win outright.

“Let’s see how I do in the 1 o’clock games,” Colman Cooper, who biked over the bridge from his home in Upper Manhattan to make his bets last Sunday, said. “If I win, I might ride back over for the 4 o’clock games.”

New York legalized online sports gambling in April, but until the state negotiates a deal with an operator — which is likely to take months — bettors cannot wager on sporting events on their phones within the state lines. They could go to a handful of brick-and-mortar sports books upstate, but the closest one to Manhattan is hours away.

The entrance to the George Washington Bridge, on the other hand, is close to thousands of people who live in Upper Manhattan and even the Bronx. Cooper’s home is only 18 blocks from the entrance to the bridge, and like other savvy Manhattan and Bronx residents, he hops on his bike — avoiding the toll of up to $16 for cars — and crosses the imaginary boundary separating the two states. Once a person’s phone confirms they are officially in Fort Lee, they can legally bet on applications such as DraftKings and FanDuel.

Jack Cherry, a graduate student who also lives in Washington Heights, jogged across the bridge last week at about 12:30 p.m., a half-hour before kickoff for several N.F.L. games. He whipped out his phone, bet on the Green Bay Packers, and then after a brief conversation with a reporter, jogged the mile and a half back home to watch the game.

“It’s a good workout,” he said on a gorgeous autumn day. “But what do I do when it’s snowing?”

The bridge, and a few other locations in New Jersey, have served as makeshift sports books ever since the state introduced online sports betting in 2018. But it expanded during the height of the coronavirus pandemic in 2020, when the bridge was often more crowded with bettors than it has been lately. That was because the real casino and sports book in East Rutherford, N.J., which serves food and shows games on multiple televisions screens, was shuttered.

When sports returned last year, many New York bettors jumped on the PATH train to Hoboken to gamble online, while others turned to the bridge. Cooper said he sometimes saw 15 to 20 players on the span at any given time.

Most of his bets are modest, he said. He likes $2 wagers with potential big payouts. On a recent Saturday, he cycled over, paid $16 for an eight-team parlay on college football ($2 on each team, and seven of those needed to cover the point spread for him to win). He won every game and collected $245. But other times, a late fumble or a bases-loaded walk meant a loss.

He said he occasionally biked across the bridge to a nearby McDonalds and played Blackjack on his phone rather than travel to the Empire Casino in Yonkers, which he used to visit more often.

“It’s kind of silly that I have to get on a bridge to bet on football — I’m not allowed to do it right over there,” he said with a smile as he pointed back toward Manhattan. “But it’s OK if I take a 20-minute bike ride.”

Silly is one description. But for Joseph P. Addabbo Jr., the chairman of the New York State Senate committee on racing, wagering and gaming, “infuriating” is another apt word for it. Addabbo, a Democrat from Queens, said New York State was losing millions in revenue to New Jersey, which is why he supported the bill to legalize online sports gambling that was signed into law in April. He wants gamblers like Cooper to be able to bet from their couches in Manhattan and for New York to reap the benefits.

“It gives me agita,” Addabbo said. “That’s our money that’s going over that bridge. Money that should be going to New York’s education system is going to New Jersey. It burns me up.”

But he is hopeful that by the Super Bowl, in February, New York will finally have its own online gaming system up and running. The New York State Gaming Commission is sifting through bids from various companies, including DraftKings and FanDuel, looking for the biggest slice of the pie for the state.

New Jersey collects 13 percent of online sports bets, which were $52 million in August alone, according to the state attorney general’s report. That was before the N.F.L. regular season started.

John Holden, an assistant professor of law at Oklahoma State University who studies efforts to legalize gambling in states across the country, said those safeguards should include red flags that are raised based by a client’s betting pattern and could even result in the bettor’s being cut off.

But he said most states that currently allow gambling do only the minimum when it comes to protections and treatments for gambling addiction.

“At some point, we are going to look back and see that was a huge mistake,” he said. “We want to do this in a regulated way where we can put checks on operators and require them to know their customers.”

According to Nick Thompson, a 36-year-old middle-school teacher from the Bronx who rides his electric scooter across to make bets, the bridge itself can provide a little protection.

“It’s kind of like a barrier,” he said. “Maybe keeps me from reaching for that phone all the time at home.”

He added that on the bridge, he could usually tell the gamblers from the tourists and others out for a bike ride or a scenic walk. But he said the gamblers rarely converse with one another.

“You might nod or something,” he said, “but we keep to our business.”

The New York-New Jersey line is not the only place where cross-border gambling happens. Johnny Avello, the director of racing and sports operations at DraftKings, said that Missourians cross the Mississippi River into Illinois to make bets, people in Kentucky trek down into Tennessee, and North Carolinians sometimes head up to Virginia.

A DraftKings study estimated that 30 percent of bettors in New Hampshire last year had Massachusetts addresses.

“I’m happy they are going over,” Avello said. “The alternative is to bet illegally with a bookie or offshore. And all the states are seeing it’s happening. That is why a lot of them want to have it in their own states.”

On the New Jersey side of the bridge last Sunday, Joel Ureña, a minor-league baseball pitcher in the independent Pioneer League, rode his electric scooter from Washington Heights to place a bet for a friend, he said. He brought a lunch of chicken and beans and leaned against a rock, scanning his phone.

“I can go buy a lottery ticket around the corner,” he said. “But if I want to bet on football, I have to come all the way over here. At least it’s a nice day for it.”