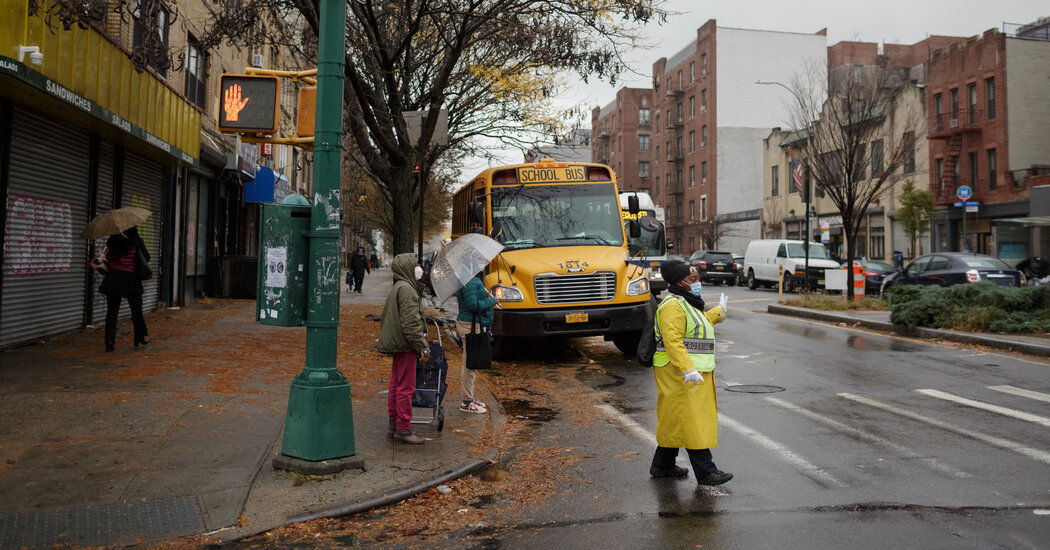 New York City’s entire public school system will shutter on Thursday, the schools chancellor Richard A. Carranza wrote in an email to principals, in a worrisome signal that a second wave of the coronavirus has arrived. Schools have been open for in-person instruction for just under eight weeks.

“As of this morning, November 18, the City has now reached this threshold of test positivity citywide and, as a result, the DOE will temporarily close down all public school buildings for in-person learning, Thursday, November 19,” Mr. Carranza wrote shortly after 2 p.m. on Wednesday, about four hours after Mayor Bill de Blasio was scheduled to give a news conference. Mr. de Blasio confirmed the news in a tweet.

The shutdown — which was prompted by the city reaching a 3 percent test positivity rate over a seven-day rolling average — is perhaps the most significant setback for New York’s recovery since the spring, when the city was a global epicenter of the outbreak.

It was also a major disappointment for Mr. Blasio, who was the first big-city mayor in the country to reopen school buildings. Moving to all-remote instruction will disrupt the education of many of the roughly 300,000 children who have been attending in-person classes and create child care problems for parents who count on their children being at school for at least part of the week.

Case numbers are rising so quickly in New York that more restrictions appear likely. Mr. de Blasio has said that indoor dining should be reassessed; only Mr. Cuomo has the authority to close indoor dining rooms.

New York is home to by far the nation’s largest school system, with 1,800 schools and 1.1 million students. The city’s public school families, the vast majority of whom are low-income and Black or Latino, have endured roughly eight months of confusion about whether and when schools would be open or closed.

Mr. de Blasio had put school reopening at the center of his push to revive the city, and he has repeatedly said that remote learning is inferior to classroom instruction. But many teachers and parents have said that the city has not done nearly enough to improve online learning.

The mayor has said that closures will be temporary, but cautioned that schools would not automatically reopen the moment when the seven-day positivity rate dipped below 3 percent again.

He said it would be too disruptive for children and educators to toggle between open and closed schools every few days, suggesting he would wait until community spread of the virus had stabilized at a lower rate. He has also said the city would soon release details about how it was planning to reopen schools.

The mayor and teachers’ union, the United Federation of Teachers, have faced intense criticism as the 3 percent closure threshold drew nearer. Mr. de Blasio has said repeatedly that the union had not pressured him to set the threshold; instead, he called the metric a “social contract” during a recent radio interview, arguing that it was a symbol of how seriously the city had approached school safety.

City officials said the number was agreed upon by the mayor’s public health team as part of a package of safety measures that they set out to be the strictest in the world.

The mayor set the 3 percent threshold over the summer, when average positivity rates were hovering around 1 percent or below. He has been explicit that the number is less of a strictly scientific measure and more of a symbol intended to reassure parents, educators and the union.

In a recent interview, Michael Mulgrew, the union’s president, said he thought the 3 percent threshold was sound. He cited warnings from experts that even if there was low transmission in schools, infection could still spread from the broader community into schools, increasing the likelihood that students and staff members might carry the virus into their homes and neighborhoods.

Mr. Mulgrew said he was dismayed that schools were closing so soon, and asserted that expressions of frustration about a shutdown from some New Yorkers seemed hypocritical.

“We had a lot of criticism from people when we were opening schools,” he said. “They didn’t want them open. A lot of that came from the very same people who are yelling now that they want them open.”

He also called on New Yorkers to take the virus seriously in order to drive down numbers again. “If we want to keep our schools open, it’s up to everyone else” to take precautions, Mr. Mulgrew said.

While city parents have come to expect contradictory messages about schools from the mayor and governor, Mr. Cuomo said during a recent news conference that he did not plan to intervene in the city’s effort to close schools.

But he said “the problem is not coming from the schools,” and encouraged the city to come up with new metrics for a shutdown once schools reopen. The governor has said the state will force schools to close only if they are in a region where the seven-day positivity rate reaches 9 percent.

Mr. Cuomo also said that viral spread was more prevalent in bars and restaurants and at indoor family gatherings, though he had not ordered restaurants or gyms to close.

Some other large school districts have recently inched closer to reopening, either by outlining plans to welcome children back into classrooms or by restarting in-person learning for children with disabilities and other vulnerable students.

But many other large districts, including Los Angeles and Chicago, have not yet reopened, though Chicago is making plans to bring younger children back into classrooms in January. Philadelphia recently delayed reopening schools, and Detroit suspended in-person instruction because of high test positivity rates.

In a stroke of bad timing, New York said last month that families had only until Sunday to decide if they wanted their children to return to in-person classes at all, likely until at least next September. Parents have had to make that decision while knowing that schools could close at any moment.

Students who opted back into classroom instruction were set to restart classes between Nov. 30 and Dec. 7. They will now have to wait weeks or even months to return to school buildings.

Many of the city’s charter schools have not yet opened for any in-person classes.

The city has faced criticism from educators and parents for its relative lack of focus on improving remote learning compared with the readying of school buildings for students, even though roughly 70 percent of children have been taking remote classes full time.

Even students enrolled in the city’s hybrid learning system were spending at least half of their week in virtual classes, with the rest of their instruction in person.

Some students, including some children in homeless shelters, still have not received iPads or laptops from the city and lack sufficient internet access.

Many teachers have reported that children sometimes struggle to log on for classes because of technology issues. Teachers have also said they have received little training in how to deliver better instruction online.