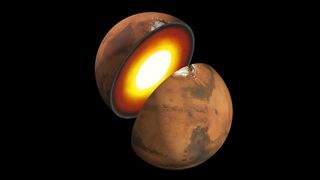 Mars’ core has long thought to be comprised of iron-sulfur.

A team of researchers at the University of Tokyo has revealed tantalizing details about Mars‘ seismic activity for the very first time in one new study. These results could make or break theories surrounding the Red Planet’s origins and provide details about its composition.

The fourth rock from the sun might be one of the closest worlds to us — swinging between distances of 34 million and 249 million miles (55 million and 400 million kilometers), dependent on its position and Earth’s position relative to our star — but it is often much safer and less expensive to investigate the Red Planet through simulations on Earth, rather than launch a spacecraft.

No one knew this more than Keisuke Nishida, an assistant professor at the University of Toyko’s Department of Earth and Planetary Science, and his team, who delved deep into the Red Planet by mimicking the conditions in the planet’s uppermost core with the help of a molten iron-sulfur alloy, which they brought to a scorching melting-point temperature of 2,732 degrees Fahrenheit (1,500 degrees Celsius).

Related: The UAE is going to Mars. Here’s the plan for its Hope orbiter

Crushing the molten mix under a pressure of 13 gigapascals using a multi-anvil press, they were able to measure seismic activity. In this case, Nishida captured P-Waves traveling at a velocity of 15,354 feet (4,680 meters) per second through the alloy and snapped images of the action using X-ray beams from two synchrotron facilities: the Photon Factory, which forms part of Japan’s High Energy Accelerator Research Organization, and SPring-8 in Harima Science Park City, Hyogo Prefecture, also in Japan.

Those who have experienced an earthquake have felt the effects of P-Waves and their seismic companion, the S-Wave. Capable of racing through rock at speeds over 13 times faster than the speed of sound through air 1,125 feet per second (343 m/ps), P-Waves provide the first jolt of this earth-shaking phenomenon. S-Waves — also dubbed secondary waves — are responsible for the second shudder during an earthquake. They can be used to estimate the distance to a quakes’ focus, or point of origin.

“Due to technical hurdles, it took more than three years before we could collect the ultrasonic data we needed, so I am very pleased we now have it,” Nishida said in a statement on May 13. “The sample is extremely small, which might surprise some people given the huge scale of the planet we are effectively simulating. But microscale high-pressure experiments help exploration of macroscale structures and long time-scale evolutionary histories of planets.”

Nishida’s relief in capturing the data is understandable. It has long been suspected that Mars has a core made of iron-sulfur but, given that direct observations aren’t yet possible, seismic waves allow us to dig deep, traveling through a planet’s interior to provide a glimpse inside.

NASA’s InSight Mars lander (the name’s short for Interior Exploration using Seismic Investigations, Geodesy and Heat Transport), which landed on the Martian plain Elysium Planitia on Nov. 26, 2018, searches for rumbles — or seismic activity — to find out more about the planet’s interior and how the solar system’s rocky inner planets formed. According to Nishida, however, there are some caveats to the lander’s measurements.

“Even with the seismic data [from InSight] there is an important missing piece of information without which the data could not be interpreted,” Nishida said. “We needed to know the seismic properties of the iron-sulfur alloy thought to make up the core of Mars.”

Using Nishida and his team’s findings, planetary researchers could read Martian seismic data to find out whether or not the Red Planet’s core is primarily comprised of iron-sulfur, Nishida said.

“If it isn’t, that will tell us something of Mars’ origins,” Nishida said. “For example, if Mars’ core includes silicon and oxygen, it suggests that, like Earth, Mars suffered a huge impact event as it formed. So, what is Mars made of and how was it formed? I think we are about to find out.”

The research was published on May 13 in the journal Nature Communications.

SpaceX set to blast into new era of human spaceflight

Watch Live: SpaceX Falcon 9 launches US astronauts on a mission to ISS

12 Underknown Songs From the Region That Birthed Emo

DR. RASHID BUTTAR: THE CORONAVIRUS AGENDA – WHAT THE MAINSTREAM MEDIA...

Get Ready for a Vaccine Information War