Sen. Mitt Romney says politicians attacking the vote by mail system are threatening global democracyBy SOPHIA EPPOLITO Associated Press/Report for AmericaAugust 14, 2020, 7:16 PM3 min readSALT LAKE CITY —
Sen. Mitt Romney said Friday that politicians attacking the vote by mail system are threatening global democracy but stopped short of criticizing President Donald Trump, who has been openly against an expected surge of mail-in ballots.
The United States must stand as an example to more fragile democratic nations to show that elections can be held in a free and fair manner, Romney said. He urged the federal government to make every effort to ensure that people are able to vote in the general election this November.
“That’s more important even than the outcome of the vote,” he said at a virtual event hosted by the conservative Utah-based Sutherland Institute. “We have got to preserve the principle of democracy or the trend we’re on is going to continue to get worse.”
Trump has suggested that increased mail-in voting because of the coronavirus pandemic could result in fraud and cost him reelection. This week he acknowledged that he’s starving the U.S. Postal Service of money to make it harder to process the expected flood of ballots from voters who are seeking to avoid polling places.
Romney said he has seen no evidence that voting by mail has led to fraud and that this voting method may be even more secure than electronic voting because it’s less likely to invite hacking interference by foreign entities. He said he would support providing additional funds to states to strengthen their voting systems.
The Republican lawmaker also discussed what he called the threat of an emerging Chinese economy and military that he says has been able to expand with virtually no pushback.
Romney said the U.S. will need to work together with other free nations to “stop China’s predation.”
He applauded the Trump administration for being tough on China. But Romney said that sticking to a nationalist “America First” approach will further alienate the U.S. from its allies and push them to support China’s interests instead.
“We’re pulling out of the world,” Romney said. “As America retreats and China pushes forward, why the nations of the world will line up behind China.”
———
Sophia Eppolito is a corps member for the Associated Press/Report for America Statehouse News Initiative. Report for America is a nonprofit national service program that places journalists in local newsrooms to report on undercovered issues.
Read More 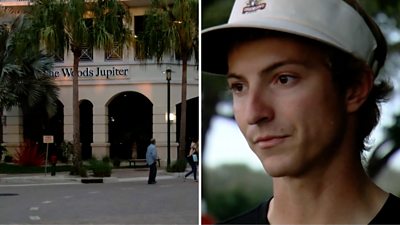