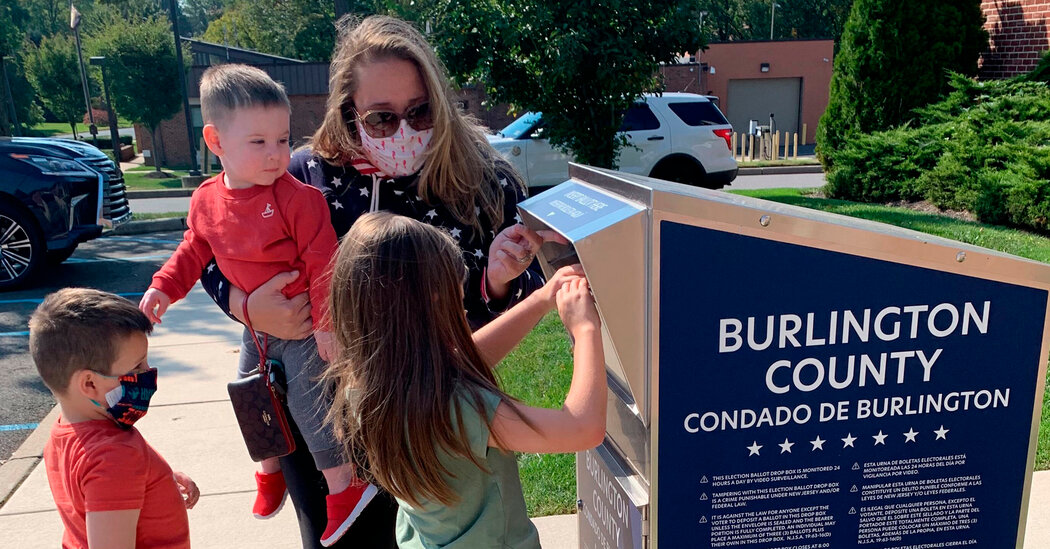 With less than three weeks to go before a pandemic-era election that is being conducted mainly by mail, Democrats in New Jersey are returning ballots at rates that outpace Republicans in some of the state’s most conservative strongholds.

In the rural north, on the Jersey Shore and in horse country, Democrats are beating Republicans to the mailbox — and the drop box — in an election where every voter was mailed a paper ballot to turn in by Nov. 3.

While many states have seen a surge in mail-in voting, New Jersey is one of only four states where the rate of return has already eclipsed 25 percent of the state’s total turnout four years ago.

Pollsters, lawmakers and campaign consultants see it as a sign of intensity among Democrats eager to show their displeasure with a polarizing president and a measure of distrust among Republicans toward mail voting — a method President Trump has attacked, without evidence, as being ripe for fraud.

“They’re very suspicious of the mail,” said State Senator Joseph Pennacchio, a Republican chairman of the president’s re-election campaign in New Jersey who is recommending voters use drop boxes. “If you had a $100 bill, would you trust putting $100 in the mail? Of course not.”

Before Representative Jeff Van Drew switched parties in December, there was only one Republican representing New Jersey in Congress: Chris Smith, who is in his 20th term in office. Mr. Van Drew, a vocal opponent of the president’s impeachment, is now in a fight for his political life against Amy Kennedy, a first-time candidate and former schoolteacher who is married to a nephew of President John F. Kennedy.

A poll released this month showed Ms. Kennedy with a five-point advantage in the conservative-leaning district, which the president won in 2016.

But it is a contest between State Senator Tom Kean Jr. and Representative Tom Malinowski — in a district that cuts across a northern swath of New Jersey — that many observers are watching most closely.

Mr. Kean, a Republican, is a son of Thomas H. Kean, a respected former governor who led the investigation into the Sept. 11 terror attacks; Mr. Malinowski is a freshman Democrat elected in 2018 as part of a so-called blue wave aligned against Mr. Trump.

Given Senator Kean’s name recognition and family ties, the outcome of the race — rated likely to “lean Democratic” by the Cook Political Report — is seen as something of a litmus test for centrist Republicans.

“And does that mean the Tom Kean Sr. brand of Republicanism is dead?” he added.

County clerks were required to mail ballots to every registered voter in New Jersey no later than Oct. 5. In many parts of the state, election officials began issuing ballots in the middle of September, enabling voters to submit their ballots more than a month before Election Day by mail, or to an election office or secure drop box.

Residents may also hand deliver paper ballots on Nov. 3 to their polling place or an election office; people with disabilities can request to use voting machines.

As it did in other states, the Trump campaign sued New Jersey to try to block mail voting and early ballot counting, which is expected to start in just over a week.

Mr. Pennacchio said the shift to paper ballots was a political power play by Democrats, dressed up as a pandemic-related safety necessity.

“There is no reason in the world that New Jersey cannot vote in person,” said Mr. Pennacchio, who noted people have still been standing in lines inside stores and outside motor vehicle offices. This week, Gov. Philip D. Murphy, a Democrat, also permitted full-contact winter sports like basketball and wrestling to begin in schools.

Mr. Pennacchio, a Brooklyn-born dentist and one-time Democrat who now helps to lead the Republican Party in Morris County, called Mr. Trump a “poster boy for traditional values” who had not lost sight of his constituents.

“He may butcher the King’s English occasionally, and God knows he tweets too much, but he’s got my back,” Mr. Pennacchio said. “When he went to Washington, he took me with him.”

The ballots trickling in offer only an early snapshot of voter response to the broadest test of mail voting in New Jersey, and the numbers are changing by the day.

But the rate of return has raised eyebrows among rank-and-file Republicans.

In Hunterdon County, Republicans control county government and outnumber Democrats by about 13,000 voters. But by the end of last week, 43 percent of its registered Democrats had voted, compared with 25 percent of Republicans in a county that sits within Mr. Malinowski’s district.

“It says there’s a real passion,” said Christine Todd Whitman, a Republican from Hunterdon County and the only woman to be elected governor in New Jersey.

Ms. Whitman is a vocal opponent of Mr. Trump and a leader of Republicans and Independents for Biden, a group that has endorsed former Vice President Joseph R. Biden Jr. for president.

If Mr. Trump loses, Ms. Whitman said, his supporters will be relegated to a wing of the party, and centrists can begin to rebuild. If he wins, the work will be more difficult, she said, but not impossible.

“We’re going to have to work hard to get it back, but it doesn’t mean it’s dead,” Ms. Whitman said of the party that she, like her father and grandfathers before her, once helped to lead.

“We are not going to stop trying to give the American people a center party,” she added, “because that’s where most people are.”

But support in New Jersey for a Republican Party overhauled in the image of Mr. Trump is also on clear display in the full-throated embrace of the president by Republicans locked in close congressional races in swing districts, and at raucous rallies for the president.

A campaign-style event in February featuring Mr. Trump in Wildwood, N.J., drew thousands of ardent fans, many of whom endured freezing temperatures as they waited in line for two days. On Labor Day weekend, supporters of the president gathered off the coast for a flotilla that participants estimated drew 2,400 boats.

In a televised debate last week, Mr. Van Drew hewed closely to Mr. Trump’s positions on issues including immigration, policing and the origin of the coronavirus, which, Mr. Van Drew said, “probably came from a laboratory — we don’t know if this was even genetically mutated.” Scientists and U.S. intelligence agencies agree that the overwhelming likelihood is that the virus evolved in nature.

David Richter, a Republican running to unseat Andy Kim — a Democratic congressman who notched a narrow win to flip the seat in 2018 — had been dismissive of the president after he was jostled out of the running in the Second Congressional District by Mr. Van Drew’s party switch. But now, after he rented a home in an adjacent district to challenge Mr. Kim, his fund-raising site professes that he “proudly stands with President Trump.”

New Jersey is one of just four states where the early rate of ballot return is already more than 25 percent of its total turnout in 2016, according to the United States Elections Project, an information hub run by Michael McDonald, a professor at the University of Florida.

Jesse Burns, executive director of the nonpartisan League of Women Voters of New Jersey, said she believed the uptick in voting was directly linked to the pandemic.

Voters this year are animated not only by marquee races, she said, but by elections for local school boards and county legislatures, which became far more relevant to their day-to-day lives as residents struggled to find virus testing sites or adapted to remote education.

“People realize that they are making decisions about how their children will attend school,” Ms. Burns said.

John Froonjian, the executive director of the William J. Hughes Center for Public Policy at Stockton University, pointed to the July primary, when even candidates who had no opponents drew record numbers of votes.

Votes for Representative Donald Norcross, a Democrat who ran unopposed in the primary, were twice what they were two years ago when he had two challengers. Mr. Kim, who had no primary opponent, got 79,423 votes, outpacing the combined 58,592 votes cast for Mr. Richter and his opponent, Kate Gibbs, who were locked in a hard-fought race for the Republican nomination.

“All these signs show a high level of enthusiasm,” Professor Froonjian said. “It’s like they can’t wait to vote.”