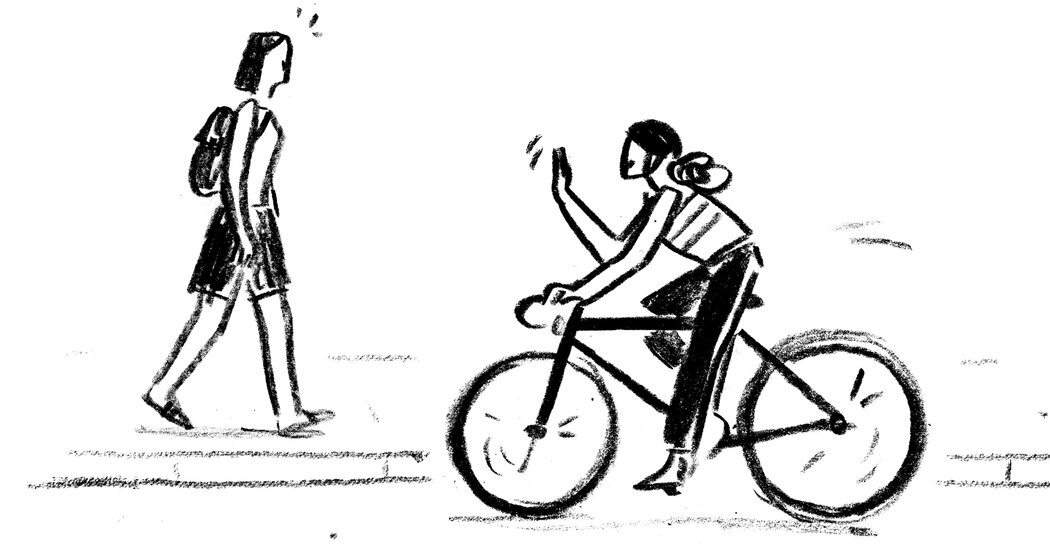 It was one of those late-summer nights where it’s still warm enough to wear a T-shirt but brisk enough that you might get a slight chill.

I was biking along Fifth Avenue in Brooklyn after having a burrito at a small Mexican grocery in Sunset Park. Just as I passed Sunset Park itself, I noticed a woman I had once worked with at a call center.

It was, and we chatted for a while in front of the park.

When we worked together, Linda would tell me about how she fed Mountain Dew to the trees in the park and about how she enjoyed going to a church near where she lived to watch the choir rehearse. She had changed a bit, but our conversation transported me straight back to the past.

“I think I’ve seen every single Marvel film twice over,” Linda said, breaking into a smile.

We walked to a nearby deli, where she wrote down my number on a loose sheet of paper.

And then I was off, biking toward the future but aware of what had passed.

When I was young, we would visit relatives in Astoria every summer.

My aunt lived in apartment building on 29th Street. Every day, she would give me a dime so that I could buy a tiny cup of Italian ice. The man who sold it stood outside the bakery owned by Christopher Walken’s parents.

I had never tasted anything so luscious. Sometimes, I would steal another dime from my aunt’s pocketbook to buy another.

I was a stranger in New York City with a few hours to kill on a beautiful spring afternoon. After a stroll around Central Park, I found an empty bench and opened a book.

After a few minutes, a neatly dressed woman who was old enough to be my mother stopped in front me.

“I see you enjoy a good book,” she said. “Do you also enjoy a game of Scrabble?”

I said that I did. She sat down and popped open a portable Scrabble set. The game was on.

We got to know each as we played. As I expected, she beat me easily in several quick games.

A retired medical researcher, she laid down some of the longest words I had seen in my time playing Scrabble, words with Z’s, X’s and Q’s that ran up her score and that I was helpless to challenge.

After a few hours we parted like old friends. I often think of that charming woman and I smile when I do.

How refreshing it was to slide into a seat on an Amtrak train from Washington to New York on a scorching summer day.

Not only did the car have great air-conditioning, but in the seat next to me was a woman who was reading a newspaper and folding it into proper quarters as carefully as if she were doing origami.

We were silent for the first part of the trip until I got up the courage to ask who had taught her this technique.

“My sixth-grade teacher in a little town in Pennsylvania,” she said, without hesitating. “She taught us to always read the left-hand column first, and how to fold it.”

I asked her why she would need to fold a newspaper that way in a small town where, presumably, there was plenty of elbow room.

She said that her teacher had often traveled to New York and then taught the class what she observed there. She said she had learned how to tie scarves the same way.

It was February. I was nearing the end of my first year of college and feeling a little unsteady and lost.

On Valentine’s Day weekend, I took a train from my college town to New York City. I thought that a weekend of wandering aimlessly around my favorite place would be just what I needed.

The day after Valentine’s Day, some friends and I ducked into a West Village bakery to get out of the cold. As we sat there, I noticed a gorgeous heart-shaped chocolate cake with pink frosting on display. It cost $40.

My friends and I began to joke around, saying that if we had enough money, we would buy the cake and eat it all ourselves as a little self-indulgence at a time when we felt as if we deserved something sweet.

A few minutes later, the woman behind the counter said she was dropping the price of the cake from $40 to $10.