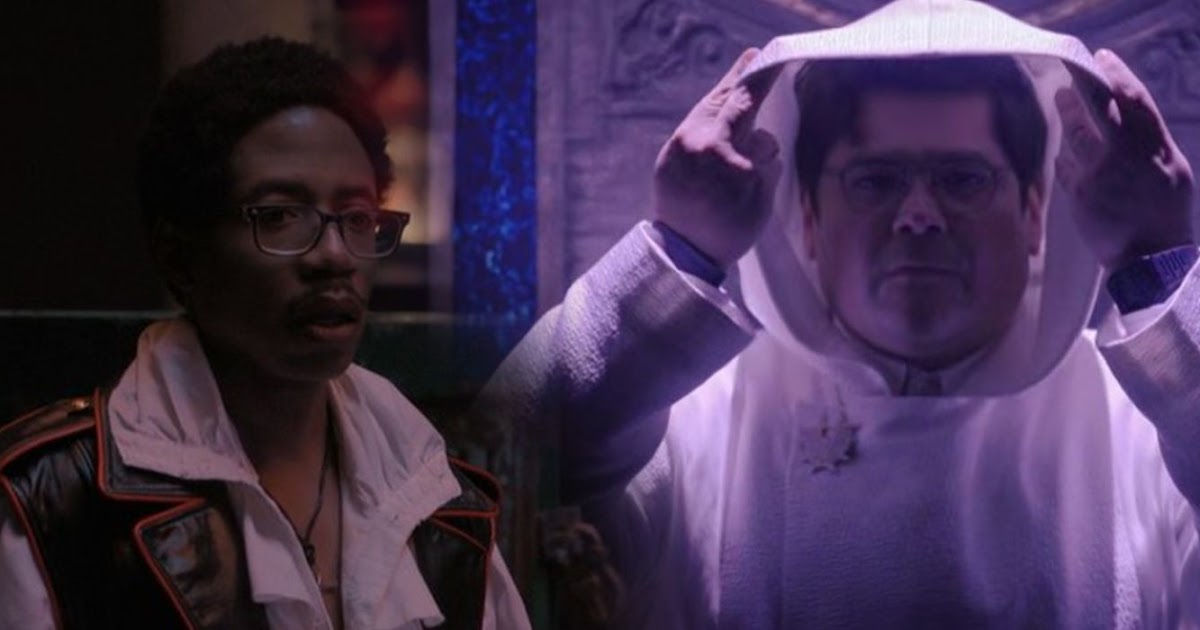 What We Do In The Shadows reintroduces former amateur vampire hunter Derek as a confused new vampire – but how did he turn undead? In What We Do In The Shadows season 3, co-equal vampire council rulers Nadja and Nandor bicker about who gets to sit on the throne, Nandor’s familiar and bodyguard Guillermo convinces them to let him do it, as it solves the lack of a throne figure, and no one would recognize him behind the ceremonial robes.

However, a problem quickly turns up as it is Guillermo who recognizes someone who’s fated for judgment: Derek, an amateur vampire hunter. After Nandor and Nadja sentence Derek to death, Guillermo puts his skills to use once again to free Derek. Guillermo then convinces Nandor and Nadja to spare Derek, on the condition that he works off his transgressions and gets training as a new vampire under Laszlo, who is too drunk to object the ruling.

How did Derek end up becoming a vampire in the first place? In What We Do In The Shadows season 2, episode 3, Guillermo meets Derek as a member of an amateur vampire hunting organization. This could provide more clues regarding Derek’s vampiric origins.

In the What We Do In The Shadows universe, the rules for siring a new vampire are highly similar to that of traditional western vampiric lore. A human must be drained of their blood, and then drink the blood of a vampire, which starts the undead transformation. After the new vampire first consumes human blood, only then will the transformation be complete. This was how Nadja turned the LARPer Jenna into a vampire in What We Do In The Shadows season 1, episode 2. The fact that it’s so easy to turn someone into a vampire is part of why Nandor’s familiar Guillermo is so frustrated that they haven’t turned him into one of them yet. However, while the process is easy to start, it’s not always quick. After drinking Nadja’s blood, Jenna spent several nights thinking that she’s sick, as Nadja never explained that her transformation has begun. This led her to eat food and then vomit it all out, as vampires cannot eat real food.

It takes several nights for Jenna to finally feed on human blood and complete her transformation. This shows how vampires in the What We Do In The Shadows universe don’t always look after the ones they sire, which could be what happened to Derek. After drinking the blood of a vampire, Derek could have simply wandered off, which explains why he knows nothing about the rules that all vampires are supposed to follow.

Derek appears in one of the first episodes that shows Guillermo’s vampire killing skills. While looking for virgin blood for his masters, Guillermo finds an organization called the Mosquito Collectors of the Tri-State Area, which turns out to be a secret organization of amateur vampire hunters. One of these hunters is Derek, who then joins Guillermo on an ill-fated mission to infiltrate a home that’s infested by vampires. While Guillermo manages to kill some vampires and escape with the other hunters, they leave many of the others behind, including Derek. In fact, Derek is missing in the rest of What We Do In The Shadows season 2, suggesting that he died. However, as he resurfaces as a fledgling vampire in season 3, it appears that instead of being killed, he was turned into a vampire after the encounter, and is now a recurring character in What We Do In The Shadows.

What We Do In The Shadows season 3 is yet to dig deeper into Derek’s vampiric origins, leaving much room for speculation. As Derek’s last known encounter with vampires was during the botched hunting mission back in season 2, he was likely sired by one of the vampires that they encountered there. Unlike the home of the main characters of What We Do In The Shadows, which is shared by only 4 vampires, the home that Derek and Guillermo infiltrated was inhabited by more than 10 vampires. Derek could’ve been sired by any one of those vampires at any time during or after the mission. However, it seems that no one stuck around to teach Derek the most basic rules that he needs to follow in order to avoid the ire of What We Do In The Shadows’ vampire council. This means that Derek’s transformation is most likely an accident, and that his sire is unaware that they not only turned an amateur vampire hunter into a vampire, but also abandoned the poor creature.

Meanwhile, another possible explanation is that Derek could’ve gotten his hands on a vial of vampire blood somewhere in the home. As Nadja shows when she turned Jenna into a vampire, some older vampires keep their blood in a vial when they intend to sire another. While it’s unlikely that Derek was turned knowingly, there’s a chance that in his scramble to escape, he could’ve found and kept one of these vials, and then later drank the contents.

Derek is a returning What We Do In The Shadows character who is also likely to appear in more future episodes. This is because Laszlo, whom Guillermo convinced to be Derek’s lawyer during his vampire council trial, is also now in charge of teaching Derek the ways of the modern vampire. In order to work off his transgressions, Derek has also been enlisted by Laszlo to sell the overpriced pillows that his human best friend Sean needs to sell. If Derek becomes a recurring character in the show, the question of who created him, and how, will become even more important. It is rumored that when a vampire’s sire dies, then all the other vampires that they created will die as well. This is an idea that’s been tackled by What We Do In The Shadows season 3, and will likely continue to be explored as the show progresses.