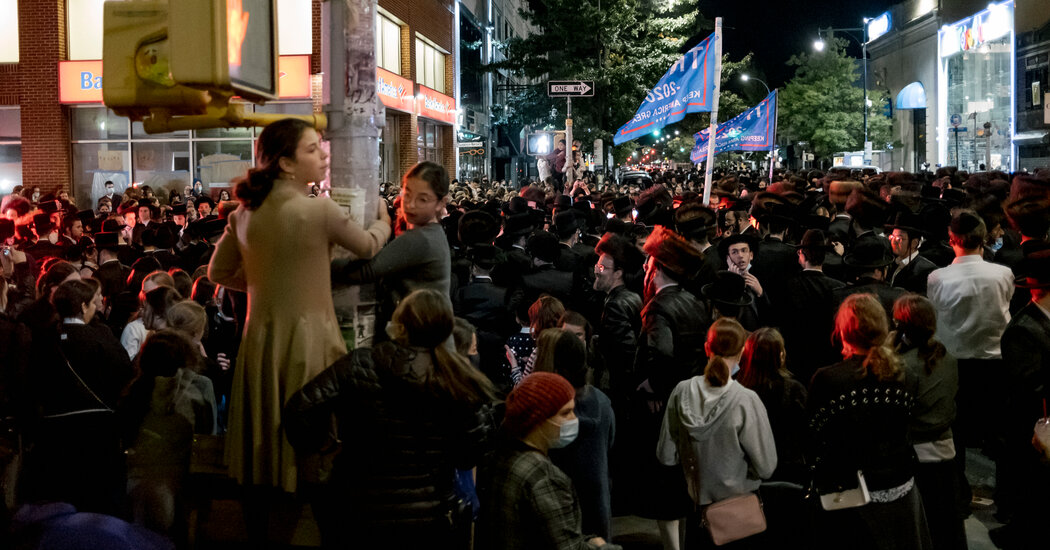 The mayor unexpectedly announced that he intended to close down schools and nonessential businesses in parts of Brooklyn and Queens, where the coronavirus was surging in communities with large Orthodox Jewish populations. Mr. de Blasio asserted that he had been in contact with the state, whose approval was needed.

It took less than 24 hours for Mr. Cuomo to fire back.

He halted the mayor’s plan to shutter businesses, calling it imprecise and incomplete, and sped up the closure of schools. By the next day, the governor unveiled his own plan: another phased-in lockdown, complete with color-coded maps and a barely veiled message for Mr. de Blasio.

“A law doesn’t work if you’re too incompetent or too politically frightened to enforce it,” Mr. Cuomo said last week.

The governor and mayor, both Democrats, have feuded for years, and their reluctance to work together closely has become a critical issue during the pandemic. Mr. de Blasio, who needed Mr. Cuomo’s approval to act, pushed out a plan without the state’s blessing, only to have the governor override that plan with one of his own — causing unnecessary confusion for thousands of business owners and school parents.

Restaurants and other businesses were left wondering if they were meant to be open or closed; parents wondered the same about their children’s schools. Tricolor maps set boundaries in the middle of city blocks and public parks. Some rules resembled past restrictions; others were completely new.

For observers of New York politics, the governor’s actions were no surprise. For the last seven years, Mr. Cuomo has overruled Mr. de Blasio again and again and again, seeing himself as both more capable and constitutionally correct: The city is, after all, a creation of the state, and, as Mr. Cuomo likes to remind people, the governor outranks the mayor.

But that penchant for control over city affairs may have spawned a new set of problems. Mr. Cuomo’s crackdown sparked angry protests, federal lawsuits, and accusations that the governor was castigating Orthodox Jews, whose leaders urged more sensitivity toward a community once cast by Nazis as purveyors of disease.

The protests in Brooklyn even became political fodder for President Trump, whose campaign signs were visible at some of the demonstrations. On Wednesday, the president used Twitter to suggest that the police response was emblematic of the “radical left.” Two days later, Mr. Cuomo accused the Trump campaign of instigating the protests.

To some, the visceral backlash from the Orthodox community was inevitable, especially since the restrictions coincided with the weeklong Jewish holiday of Sukkot. And should the state’s intervention help fend off a possible second wave in New York, that would outweigh any fallout.

Yet the public tug-of-war between Mr. Cuomo and Mr. de Blasio, just another of many during the pandemic and their overlapping tenures, hampered the implementation of the new rules.

“I understand these are difficult acts to enforce,” Mr. Cuomo said last week. “These are state laws. Blame me. I have no problem with that.”

Whether Mr. Cuomo’s plan would work was still an open question: The city issued some 60 summonses and more than $150,000 in fines over the weekend, as some congregants continued to gather in large groups.

Mr. de Blasio’s initial plan called for closing schools and nonessential businesses in nine areas defined by ZIP codes; a city official familiar with the city’s planning process said that the mayor did not use more specific boundaries, partly out of concern for stigmatizing the Orthodox community. ZIP codes were also thought to be generally easier for people to understand, and cover more ground.

The mayor, citing a court order, also shied away from imposing attendance limits at synagogues, beyond the 50 percent capacity restrictions already in place.

That omission — as well as Mr. de Blasio’s unilateral decision to announce a plan — stunned and perplexed Mr. Cuomo’s team. Robert Mujica, the governor’s budget director and a member of his coronavirus task force, said that not limiting mass gatherings flew in the face of advice of public health officials “everywhere, around the world.”

Mr. de Blasio admitted that his announcement, without warning Mr. Cuomo, was a tactic to publicly pressure the governor to act quickly.

“We want the state to know, in a very public manner, what we believe will allow us to contain the situation,” the mayor said last week. “The thing I’ve learned now over these seven-plus months is that it is very important, once we have come to a conclusion of what is needed, to be very public about it.”

Mr. Mujica said that state officials had been simultaneously developing a plan as they saw clusters develop, looking at examples from England, France and Japan, as well as states like California, which regulates re-openings at a county level.

But, he added, “we were presented with a public announcement” from the mayor. “So that puts us in a situation where we have to react to that,” he said.

The following day, Mr. Cuomo held a conference call with Mr. de Blasio and Michael Mulgrew, the head of the teachers union, which had been pushing for the mayor to close schools in the hot spot neighborhoods.

That phone call was the only conversation Mr. Cuomo has had with Mr. de Blasio all month, a City Hall official said.

In another round of calls, Mr. Cuomo’s top aides, incensed at times, told Mr. de Blasio’s staff that the mayor was overstepping his authority, a city official said.

Mr. Mujica suggested that city officials had no good answers to specific questions about enforcement and educating the public. “There’s confusion because you put something out that’s half-baked,” he said. “You don’t have the answers that you need for everything and then now you have to try to make it work when you’ve already announced it all.”

In particular, Mr. Mujica said that state officials questioned the use of ZIP codes when technology can plot the location of every new infection. “ZIP codes are not made for this purpose,” he said, adding that using such codes could unfairly punish businesses and residents outside of hot zones. “We can be more precise, so let’s do it.”

The governor asserted that local officials like Mr. de Blasio wanted a “total close-down” of synagogues, while he wanted to work with the Orthodox community to cap the occupancy at 50 percent.

“I don’t want to do it in an adversarial way,” the governor said, according to a recording of the conversation obtained by The New York Times. “I need you to tell the community, ‘We have to comply.’”

Mr. Cuomo also said to the leaders that “we’re going to enforce the rules, but the 50 percent is OK.”

“And no more than 50 people at an outdoor gathering,” he added.

But just hours later, the governor then put forward rules to limit attendance to 25 percent — or 10 people, whichever number was lower, at some houses of worship. Mr. Cuomo’s aides acknowledged that the governor had not disclosed those plans on the conference call because he had not finalized them; they said that epidemiologists later convinced him to institute a new cap.

Among those apparently confused was Bill Neidhardt, the mayor’s spokesman, who posted a video image on Twitter of Kermit the Frog futilely trying to decipher a map.

Mr. Cuomo’s restrictions were quickly rebuked by Orthodox Jewish lawmakers, all Democrats, who said the new rules unfairly targeted Jews and included a “duplicitous bait-and-switch” on new rules surrounding synagogues. In a statement, they described the governor’s rhetoric in recent days as “irresponsible and pejorative, particularly to a community of Holocaust survivors and their descendants.”

On Thursday, Agudath Israel of America, a prominent Orthodox group, and the Roman Catholic Diocese of Brooklyn each filed suit in Federal District Court in Brooklyn, claiming their First Amendment rights had been violated.

By then, protesters had already been demonstrating for two nights in the streets of the Borough Park neighborhood of Brooklyn, lighting fires, burning masks and attacking a local journalist. In remarks on Thursday, Mr. Cuomo decried the lack of enforcement from New York City police.

Whether the crackdown reduces the number of virus cases may depend on the level of cooperation from Orthodox Jewish leaders.

But city officials worried whether the governor’s actions might alienate and discourage cooperation in a conservative Orthodox community where some members look askance at dictums from secular governments.

“I am very worried that we have completely lost trust with the most impacted communities and that it’s going to undermine our public health efforts,” said Mark D. Levine, a Manhattan councilman who leads the health committee. “The rollout of this policy, which was going to be extremely sensitive in the best of circumstances, only further eroded that trust.”

In announcing his plan, Mr. Cuomo, a Catholic, said he had taken the action against the communities because he loved them and wanted to protect them, quoting the Torah about “how certain religious obligations can be excused, if you are going to save a life.”

“This is about saving a life,” the governor said.

State Senator Simcha Felder, a Democrat who has also worked closely with Republicans over the years, said he had no opinion on the governor’s sense of Judaic teaching, but had another piece of scripture in mind.

“I highly recommend the governor read the Bible’s story of David and Goliath,” Mr. Felder said. “It really doesn’t end that well for Goliath.”