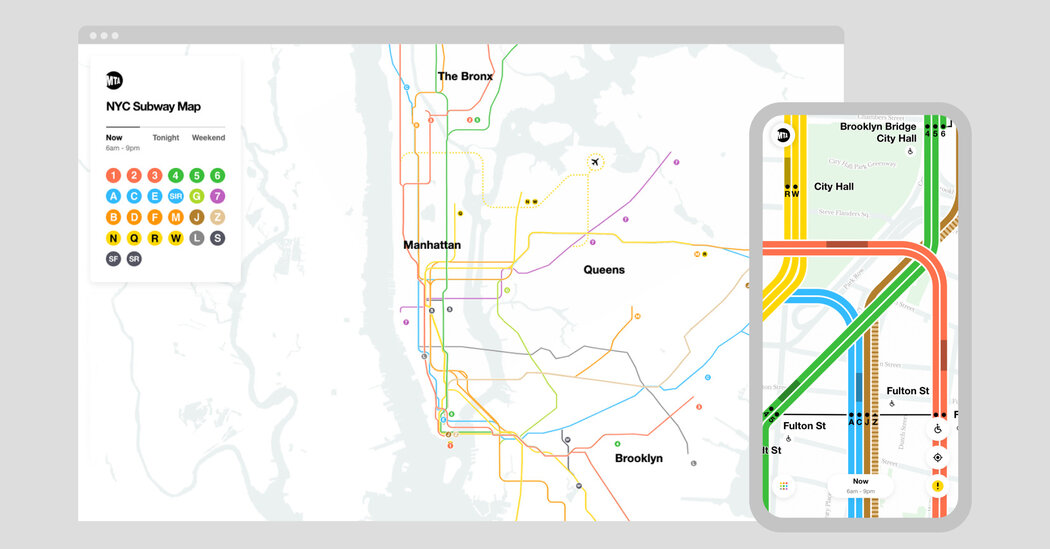 Small, gray rectangles show trains moving through subway tunnels in real time. Brightly colored strokes depicting each of New York City’s 26 subway lines fade when those lines go out of service. When trains are running in only one direction, those solid lines become dashes and black dots representing stations turn into triangles.

Ride the New York subway, and there is a good chance it is using equipment dating to World War II. But open up the system’s new map on a phone and you will be whipped into the 21st century.

The new map, which transit officials unveiled this week and say is the first of its kind in North America, is designed to show how service is running in real time and help riders navigate often complicated service disruptions caused by construction projects, train break downs and other unplanned interruptions. The map also seeks to alleviate another rider frustration by showing elevators and escalators that are out of service.

Up to now, information about subway schedules changing during weekends, or about trains running on tracks typically used by other lines, was available in text form on the Metropolitan Transportation Authority’s website and posted on lengthy, baffling posters plastered in stations.

But by depicting service changes visually, transit officials say, the map will allow even the most novice straphanger to navigate the labyrinthine underground network, which is routinely plagued with disruptions.

“I have struggled along with other New Yorkers to navigate service changes. Sometimes reading the service changes in text form is confusing,” Sarah Meyer, chief customer officer at New York City Transit, said in an interview. “We needed to make sure we’re giving people information they need, when and where they need it.”

The digital map is the Metropolitan Transportation Authority’s latest effort to modernize the antiquated system: Transit officials recently announced that they had rolled out the agency’s contactless payment system — which allows riders to pay a fare by tapping their credit card or cellphone onto an electronic reader — to nearly 80 percent of subway stations.

Both technological advancements have been hailed as major wins for the agency, even as it grapples with the worst financial crisis in its history, a pandemic that ripped through its work force, sickening thousands of transit workers, and a ridership that has cratered. Today only about 30 percent of the subway’s usual 5.5 million weekday riders are using the system.

But like so much else this year, even the new map has not been untouched by the pandemic. When Ms. Meyer first thought to create a more dynamic map, she hoped it could help riders navigate service changes after the M.T.A. embarked on its ambitious $54 billion plan to upgrade the subway, she said.

Now, with those plans on hold indefinitely because of the financial crisis, riders will more likely use the map to navigate the service cuts the M.T.A. has warned it will make in the absence of billions of dollars in federal aid.

“I couldn’t help but fear looking at the map and what it would be like for half of those snaking trains to suddenly vaporize,” said Danny Pearlstein, a spokesman for the Riders Alliance, a grass-roots advocacy organization. “But unfortunately that is where we are if fiscal austerity prevails in the face of enormous need in the city and the people who depend on its infrastructure.”

Until now, service changes were described in paragraphs-long updates on the transit agency’s website in a section known as “The Weekender” and on a mobile app, MYmta. That app allows users to check for any disruptions on lines, much like a skeleton version of Google Maps.

But the explanations could be difficult for riders to decipher. The new website simplifies them by effectively creating different maps for different times of day.

“The lines are always morphing; they are always changing,” said Felipe Memoria, founding partner of Work & Co., a global technology company that created the map pro bono for the M.T.A. “This is the holy grail of the product, actually visualizing the changes.”

On weekdays, a rider using the digital map will see the network as it looks normally, but with real-time warnings of a broken elevator or lines running in only one direction because of an emergency.

On weekends, when construction often takes place and temporarily eliminates certain lines, the new map can be simplified with lines out of service blurred out.

“Until now it’s been tough for riders, it’s been difficult to find information that this map provides, especially when it comes to something like an elevator or escalator outages,” said Jaqi Cohen, campaign director for the Straphangers Campaign, an advocacy group. “I think this is the trend we want to see from the M.T.A., providing more data to riders so they can make more decisions on their commutes every day.”

But while the new map is sleek and the moving trains are entrancing, critics have been quick to point out its drawbacks: Riders cannot plan trips on it like they can with Google Maps. It does not show the entrances to the subway. There is no crowding information, which could be useful to riders wary of traveling in packed subway cars during the pandemic.

The criticism, in some ways, was inevitable — debates over the subway map have simmered, unresolved for decades. Map experts and transit nerds have been entangled in a quest to create the ideal diagram of North America’s largest subway network, fomenting tension and often sparking controversy.

When the transit authority introduced the famed Vignelli map — named for its designer, Massimo Vignelli — on Aug. 7, 1972, complaints from New Yorkers flooded in: There were no streets to help riders orient themselves. The rectangular Central Park looked like a fat, brown square. The water around the city was beige, not blue.

When the agency revamped that map years later, eventually creating the map riders know today, more issues arose: How much street context could fit neatly onto a piece of paper? Should each of the subway’s lines be depicted individually? And who deserved credit for the new guide that the M.T.A. still plasters inside stations and subway cars?

“The perfect map will never happen because different people have different needs for the map,” said Harris Schechtman, a transit expert who worked for the M.T.A. for 32 years and won a subway map competition the transit agency sponsored in 1964. “But I tip my hat to this. It’s the best. It’s a quantum leap from anything we’ve seen before.”