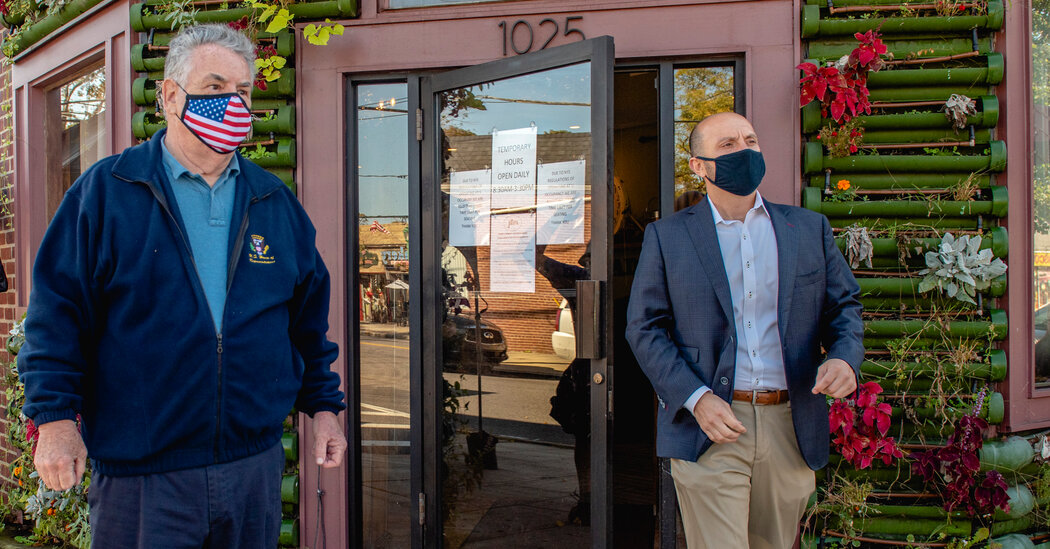 Mr. Garbarino was heavily backed by Representative King, a popular 14-term congressman who is retiring and did not seek re-election. Mr. Garbarino defeated Jackie Gordon, a public-school teacher and veteran of the Army Reserve who served in the Iraq war.

Ms. Gordon, a Jamaican immigrant, would have been the first woman and first Black person to represent the district, which encompasses parts of Nassau and Suffolk Counties. The race had not been called by The Associated Press, but Ms. Gordon conceded on Wednesday.

The Democratic Congressional Campaign Committee included the race in its “Red to Blue” program, and money poured in: Ms. Gordon raised more than double what Mr. Garbarino was able to draw: $3 million to his approximately $1.4 million. Outside groups spent another $3 million opposing Mr. Garbarino’s candidacy.

The Democratic Party’s attention to the race was connected to three factors: Mr. King’s retirement, which he announced in 2019; his narrow margin of victory in 2018; and the area’s low approval rating of President Trump, for whom Mr. King has been a loyal supporter.

Mindful of the changing demographics of the district — there are roughly 12,000 more active registered Democratic voters than Republican — Mr. Garbarino campaigned on a law-and-order platform and rarely invoked President Trump specifically.

But the strong Republican presence, particularly in Suffolk County, kept criticism of Mr. Trump to a minimum, even from Ms. Gordon, who never mentioned the president in her video campaign ads.

She trailed Mr. Garbarino by nearly 15 percentage points after the machine count of ballots, and was able to reduce that margin during the count of mail-in ballots. In her concession statement, she said that although the gap had been narrowed to single digits, it was “apparent that we did not achieve the number of votes needed to win.”

Mr. King was influential in Congress as the former chairman of the House Homeland Security Committee, where he oversaw congressional hearings on domestic terrorism. He was the ranking member of the Subcommittee on Emergency Preparedness, and served on the Financial Services Committee.

But his popularity among district voters had dimmed, perhaps spurred by his close association with Mr. Trump, whose candidacy he had once been reluctant to support. Mr. King has since praised Mr. Trump effusively, coming out strongly in support of policies like the president’s travel ban for people from majority Muslim countries. In 2018, Mr. King won by just four percentage points, a far cry from past victories like his 2010 race, when he commanded 72 percent of the vote.

Even so, the success of Mr. Garbarino, his chosen candidate, shows the continued strength of the Republican establishment in Long Island, where in 2016 Mr. Trump beat Hillary Clinton by nearly eight percentage points.

Mr. Garbarino said in a statement that he was “honored and excited” to succeed Mr. King, adding that he looked forward to “working with our brave law enforcement to keep communities safe, fighting to preserve our environment, supporting our veterans and delivering real results for Long Island families.”