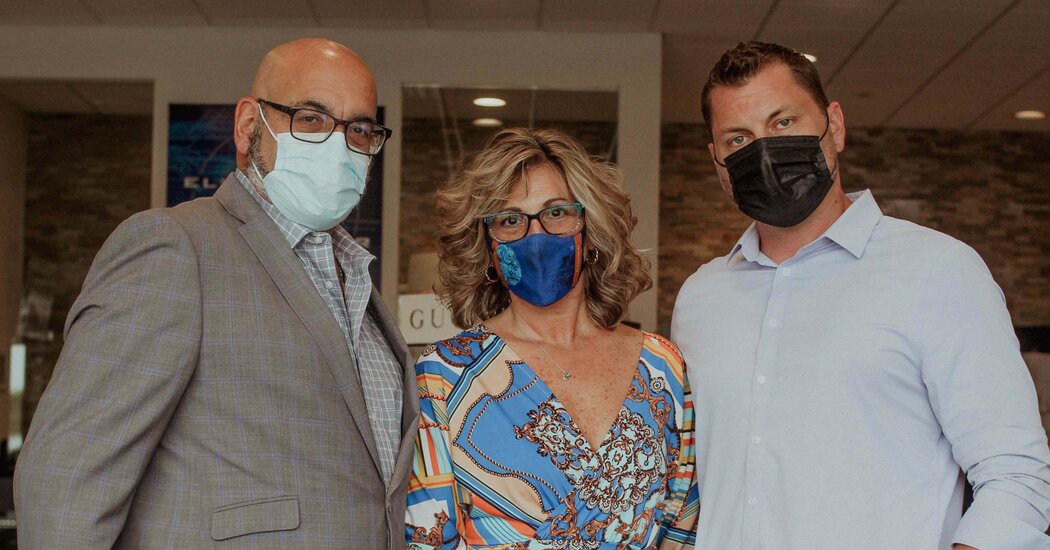 Tiara Felix loves her job at an eyewear store in the Bronx, where she spends five days a week managing customer orders in a back-room lab, surrounded by colleagues fitting and cutting lenses for glasses.

But there is one thing that could prompt Ms. Felix, 31, to leave: a vaccine mandate.

Ms. Felix is among the six remaining unvaccinated employees at her company, Metro Optics Eyewear, who have been unmoved by a monthslong campaign by their bosses to persuade every employee to voluntarily get a coronavirus vaccine.

Time is running out. Employers across the United States are now confronted with the same question of whether to fire workers who refuse to get vaccinated, a dilemma that carries new urgency as the rapidly spreading Delta variant leads to a surge in hospitalizations among the unvaccinated and threatens to stall the economic recovery.

This week, New York City became the first American city to announce a vaccination requirement for workers and customers at a variety of indoor venues, including restaurants, gyms and theaters. Across New York City, 66 percent of adults have been fully vaccinated.

The new rules followed weeks of pressure by city leaders on private businesses to mandate vaccines or frequent testing as a condition of employment. A growing number of companies, including Facebook, Microsoft and the fitness chain Equinox, have announced that employees must be vaccinated to return to the office.

But the issue can be particularly complicated for the many small businesses that provide jobs to more than three million people in New York City, about half of the city’s work force.

They often employ lower-income workers, who polling has shown are less likely to get vaccinated because of a mix of factors, including distrust of public health officials, limited access to vaccine sites and less of an ability to take time off work. Losing even one employee by requiring vaccinations can have an outsized impact, especially in a summer where help-wanted signs have dotted restaurants, corner stores and salons across the city.

At Metro Optics Eyewear, which has four stores in the Bronx, home to the lowest vaccination rate in New York City, it has been a painstaking journey to persuade 90 percent of employees to get vaccinated.

John Bonizio, 63, the owner of Metro Optics, was ecstatic when he learned in January that optometrists and their staff members would be among the first groups eligible for the vaccine. During the chaotic early days of the rollout, Mr. Bonizio found a hospital with plenty of vaccine appointments available and offered to schedule them for every employee.

About half of the staff members rushed to get a shot. But because his employees interact with dozens of patients and customers each day, he wanted everyone to be vaccinated.

When he called the employees to ask why they were hesitant, their answers foreshadowed the resistance that would unfold in the coming months around the country.

Some people said they did not trust the government, citing false conspiracy theories that the vaccines contained tracking microchips planted by the authorities. Others noted that the vaccines had not yet been formally approved by the Food and Drug Administration and worried that getting vaccinated would interfere with their ability to have children. (Scientists have said there is no evidence that the vaccines affect fertility or pregnancy.)

One employee said she was concerned because she thought a vaccine had caused the characters in the film “I Am Legend” to turn into zombies. People opposed to vaccines have circulated that claim about the movie’s plot widely on social media. But the plague that turned people into zombies in the movie was caused by a genetically reprogrammed virus, not by a vaccine.

Talking to employees about the misinformation they saw spreading on social media was like walking on eggshells, said Brett Schumacher, 38, the company’s general manager. Trying to persuade a skeptical co-worker to trust the government and health officials in the middle of the workday can be awkward.

“We do have one person who is just anti-vax, period,” Mr. Schumacher said. “I didn’t get into the full reasons behind it because that kind of stuff just makes my blood boil.”

Mr. Bonizio considered firing employees who refused vaccines, but said he felt uncomfortable telling employees to “get an injection they’re opposed to or else they can’t work or feed their family.” He was also unsure about the legal implications of doing so.

CNN said on Thursday that it had fired three employees for going to the office unvaccinated, one of the first known examples of a major American corporation terminating workers for ignoring a workplace vaccine mandate.

The federal Equal Employment Opportunity Commission issued guidance in May that said employers were allowed to require vaccines for employees who physically enter the workplace. The agency also said that employers administering vaccines could not offer “coercive” incentives to get vaccinated, but did not explain precisely what it was banning.

Mr. Bonizio said it should be up to the government to require vaccines, not private businesses.

“We have to turn around and mandate vaccines because the government’s afraid to do it?” he said. “What happens if we get sued? Are they going to protect us?”

The close-knit work culture at Metro Optics also gave management pause about requiring vaccines. Some employees have worked at the company for decades. At a company Christmas party one year, Mr. Bonizio sang a version of “Mambo No. 5” with every employee’s name in it. When his stores temporarily closed during the pandemic, he kept the entire staff on the payroll.

So instead of a mandate, he and his managers tried persuasion and incentives.

“You have to be careful how you present it,” said Denise Fitzpatrick, 51, a store manager. “You can’t just tell them they have to get it, because then they’ll say, ‘Who are you to tell me?’”

The bosses shared lighthearted selfies after getting the vaccine and reiterated that there were no lingering side effects. They framed vaccination as a way to protect the health of fellow colleagues. The company arranged car pools to shuttle employees to vaccination appointments. Employees who got vaccinated early on received $1,000 bonuses.

Understand the State of Vaccine Mandates in the U.S.

Mr. Bonizio said his efforts were also thwarted by confusing rules around vaccine access in the city. After one employee lined up for an appointment at Yankee Stadium, she was told she could not get vaccinated there because she did not live in the Bronx. A week later, she contracted the virus.

In March, Metro Optics announced a new requirement. Anyone who was still unvaccinated would have to submit to weekly Covid-19 tests.

The requirement proved enough of a hassle that it prompted another wave of employees to get vaccinated, leaving only a handful of holdouts.

Policing the weekly tests has now become the biggest challenge. One employee told Mr. Bonizio that she had gotten tested but that the results would be delayed. He later found out she had lied to him, he said.

Employees who refuse to get tested are sent home. A sales associate recently resigned from her job after managers sent her home for failing to submit a test for weeks.

“If you’re mandating testing, you better have a system in place to monitor this, because people will figure out the holes,” Mr. Bonizio said.

Months of coaxing have been unable to sway Ms. Felix, the lab worker, who said her bosses still tell her to get the vaccine “every chance they get.”

She spent the pandemic selling clothes she designed on Instagram before a family friend recruited her to join Metro Optics earlier this year.

She finds the frequent testing to be a nuisance, but she said she prefers it to a vaccine mandate. Ms. Felix, who lives in the Bronx, said the only vaccinated member of her family is her grandmother. She described the city’s latest incentive to give $100 to anyone who gets vaccinated as “desperate,” saying it made her even more skeptical.

On Thursday, Mayor Bill de Blasio said that new vaccinations were up 40 percent in the past week compared with the first week of July, an increase he attributed to the recent mandate announcement and the $100 incentive.

“How are you going to force something on us that’s not even F.D.A. approved?” Ms. Felix said.

The agency has authorized the vaccines for emergency use, and Pfizer could receive full approval for its vaccine as soon as next month.

“It’s our choice,” Ms. Felix added. “I don’t want no foreign object or vaccine in my body that they’re not even sure what it is.”

Metro Optics has decided to require all new full-time employees to be vaccinated.

But Mr. Bonizio, who is facing a shortage of optometrists, recently interviewed one who said she did not want the vaccine. He is debating testing her out part-time.