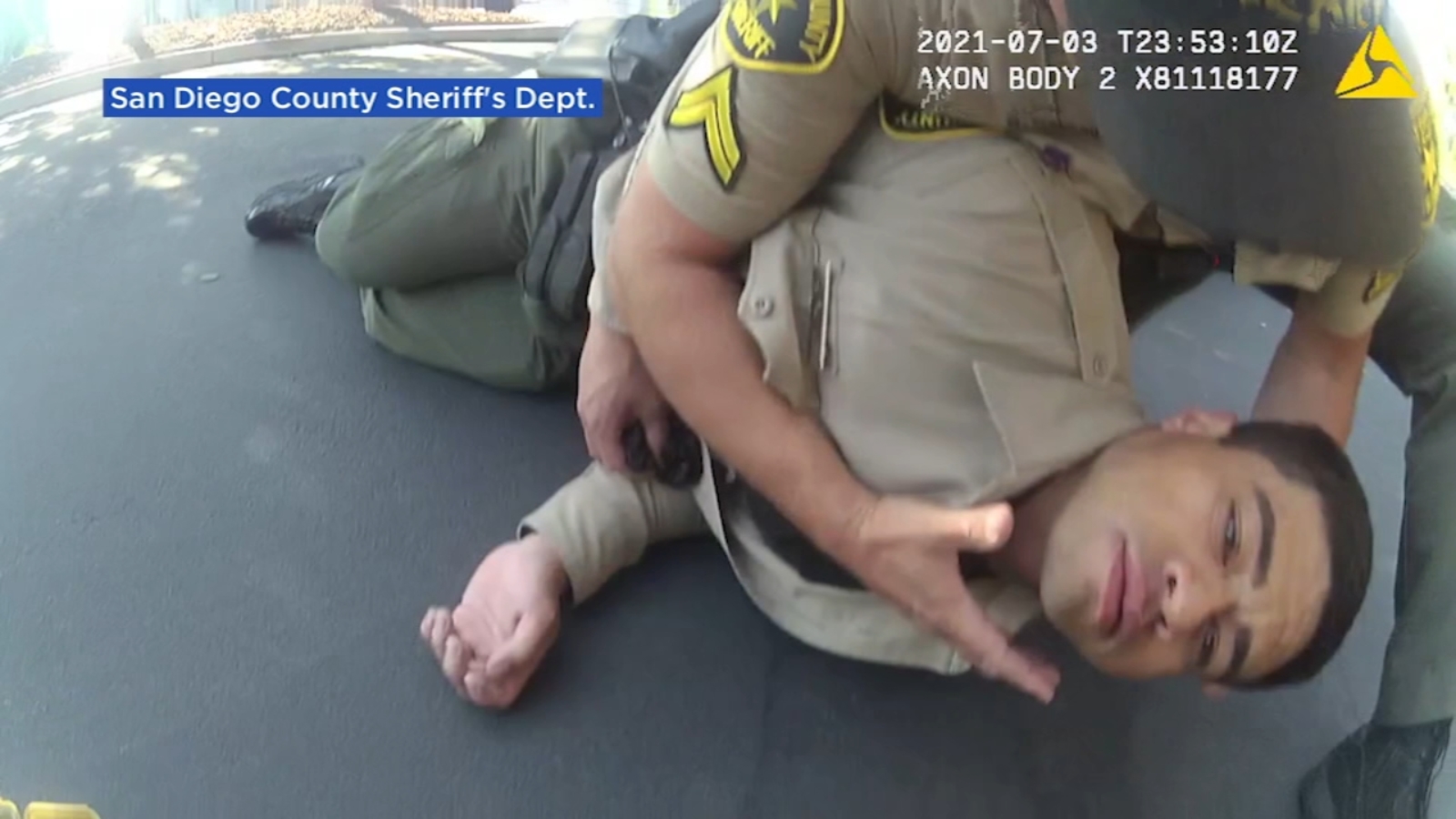 SAN DIEGO — Medical experts are raising questions about a video released by the San Diego County Sheriff’s Department, and widely shared on news outlets including this one, that shows an officer collapsing after they say he handled fentanyl.

Dr. Priscilla Hanudel, an emergency medicine physician in Los Angeles and member of the ABC News’ Medical Unit, says the officer was more likely to have fainted or suffered a seizure than to have had any reaction to the potent opioid just by having it flying around in the vehicle and breathing it in.

Dr. Stephanie Widmer, an emergency medicine physician and medical toxicology fellow in New York, says overdoses most commonly happen when the drug is injected directly into the bloodstream or snorted.

“People with the intent to get high, may overdose after ‘snorting’ or insufflating fentanyl – this is not to be confused with passively inhaling fentanyl powder that somehow became suspended in the air,” she said. “Overdosing from such an exposure would be exceedingly rare and likely unheard of.”

Hanudel also said that law enforcement officers and health care workers don’t commonly experience overdoses of the drug and such a reaction is “almost never seen.”

For instance, Hanudel says even in the manufacturing process, “it takes about 200 minutes of exposure to reach a starting dose,” she said. “It’d be very unlikely to happen in a very brief exposure.”

In the wake of the sheriff’s office releasing the video last Friday, other medical experts questioned the events depicted in the video, according to a story from the New York Times.

The sheriff’s office told the Times a report of what was discovered at the scene would not be available until Monday and that the deputies involved were on vacation.

According to Hanudel, the idea that a first responder had a dangerous reaction through a passing exposure to fentanyl or any opioid is unlikely, she said, and perpetuating it could put other lives in danger.

“We wouldn’t want first responders, police officers, healthcare workers to have a fear of something that is extremely unlikely and that would prevent them from doing their jobs with confidence,” Hanudel said.

Law enforcement professionals told ABC News that it is standard procedure to warn first responders in training of coming in contact with even the smallest amount of Fentanyl.

“It has been determined that it would only take 2-3 milligrams of fentanyl to induce respiratory depression, arrest and possibly death,” Drug Enforcement Agency training documents read. 2 to 3 milligrams is about 5 to 7 grains of salt.

“Police officers all over the country have been trained through articles, videos and other publications from the Drug Enforcement Agency and other sources beginning in 2017,” Lieutenant Jeff Richardson, director of training with the Edmond, Oklahoma Police Department told ABC News. “Only in the rarest of cases would you find a police department in this country not following DEA protocols.”

“We’ve experienced such profound loss across this country, with nearly 100,000 losing their lives last year to overdose,” said Ryan McNeil, PhD, an Assistant Professor in the Yale School of Medicine and Director of Harm Reduction Research with the Yale Program in Addiction Medicine.

“The last thing that we need is misinformation circulating about fentanyl because this will lead to ill-informed and ineffective responses,” he added. “It might make people less likely to respond if someone does have an overdose and needs to be administered naloxone or administered CPR. That would be tragic.”

According to a 2018 interim report from the National Institute for Occupational Safety & Health, “brief skin contact by itself with small amounts of fentanyl or its analogues is not expected to cause symptoms, but possible subsequent hand-to-face contact could be a possible route of exposure.”

Fentanyl is a powerful opioid that can suppress breathing, even in small doses. Exposure can lead to decreased oxygen levels, a change in mental state including slowed response and slurred words and eventually death. However, that’s usually a gradual process not reflected in the video, Hanudel said.

“It would happen sort of slowly over time, where in this case… It looks like it might have been a fainting episode, which we would call ‘syncope,’ maybe even a seizure, but not quite looking like a fentanyl overdose,” she said. McNeil said fentanyl overdoses can come on faster, but only in cases of injection.

Doctors say to know what happened in this case they would want to see a toxicology screen of the patient, a patient’s medical history and a conclusive lab testing of the substance.

This is not the first time law enforcement has shared an anecdote that they say illustrates how minimal exposure led to an overdose even though that appears to go against the science. A report published in 2020 enumerated more than “551 news articles spanning 48 states. Misinformed media reports received approximately 450,000 Facebook shares, potentially reaching nearly 70,000,000 users from 2015-2019.”

The incident in San Diego happened last month, when the Sheriff’s office says deputy David Faiivae was processing suspected fentanyl at the scene of the arrest. In the video released by the sheriff’s office, the deputy said “in an instant” he couldn’t breathe, and his field training officer, Cpl. Scott Crane, yelled at his trainee to be careful near the substance and said Faiivae staggered backward and suddenly collapsed.

When Crane administered naloxone, or Narcan, Faiivae appeared to wake up.

“Narcan, everyone who’s administered knows, it has a very sudden and abrupt onset and reversal of any opiate,” Hanudel said. “Typically we see patients sort of getting agitated right away as the sedation wears off, they sort of sit straight up…Whereas in this case there wasn’t much of a change as it was being administered… we just expect to see a more sudden reversal and improvement than this officer had.”

McNeil has spent hundreds of hours at supervised consumption sites where people inject pre-obtained drugs, most often fentanyl, in a safe space where they can be saved.

“All of this has happened without incident because overdoses from incidental exposure – simply being around – fentanyl aren’t happening,” he said. “If incidental exposure to fentanyl was so dangerous, we would have physicians, nurses, and other healthcare staff dropping from overdoses across the country, as it’s commonly used for pain management in hospitals.”

Narcan is used frequently in medical situations, including if a patient received too high of a dose of an opiate during a procedure, she said. Doctors also supply Narcan to patients who are on opiate-based pain medication in case they encounter over-sedation. It is also distributed to law enforcement and given out free in certain communities to help slow the overdose epidemic.

When asked for comment about the video on Friday, the sheriff’s office referred ABC News to its original “public safety video” and offered a statement, which read in part: “Fentanyl continues to be one of the greatest threats facing San Diego County and the nation. This synthetic opioid is 50 times more potent than heroin. Just a few grains of fentanyl can be absorbed through the body and lead to respiratory failure and even death.”