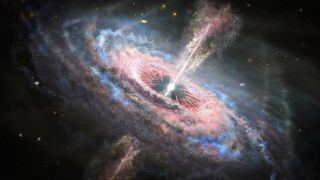 An illustration of a quasar blasting a jet of hot, radioactive wind into the cosmos.

At the center of almost every galaxy in the universe is a supermassive black hole gobbling up incredible amounts of matter, and belching out incredible amounts of radiation. The biggest and hungriest of these gobblers — called quasars (or quasi-stellar objects, because they look deceptively like stars when seen through most telescopes) — are some of the most energetic objects in the universe.

As infalling matter swirls around the quasar’s maw at near-light-speed, that matter heats up and flies outward, propelled by the incredible force of its own radiation. All that intergalactic indigestion makes a quasar an awesome sight, capable of shining a thousand times brighter than a galaxy of 100 billion stars. However, a series of new papers suggests, the very same radiation that puts quasars on our maps of the universe may be devastating the galaxies that host the insatiable objects.

In six studies published March 16 in a special edition of The Astrophysical Journal supplemental series, astronomers used NASA’s Hubble Space Telescope to spy on 13 quasar outflows — that is, gusts of high-speed radiation pouring out of distant quasars. By observing the outflows over several years and in many wavelengths across the electromagnetic spectrum, the team found that the wind and gas gushing out of a quasar can travel at more than 40 million mph (64 million km/h) and reach billions of degrees in temperature.

Related: The 15 Weirdest Galaxies in Our Universe

This hot, fast gas is capable of causing incredible damage to a quasar’s host galaxy, the researchers found, rampaging through the galaxy’s disk like a tsunami and blasting potential star-forming material deep into space. In a single year, one quasar outflow can push hundreds of suns-worth of matter into intergalactic space, the researchers found, creating a stunning fireworks display while preventing new stars from forming.

These findings could help answer a long-standing conundrum about our universe: Why do large galaxies seem to stop growing after reaching a certain mass? When the team plugged their new quasar outflow data into models of galaxy formation, they found that the gales of radiation were capable of stunting the birth of new stars in large galaxies.

“Theoreticians and observers have known for decades that there is some physical process that shuts off star formation in massive galaxies, but the nature of that process has been a mystery,” Jeremiah P. Ostriker, an astrophysicist at Columbia University in New York and Princeton University in New Jersey not involved in the study, said in a statement. “Putting the observed outflows into our simulations solves these outstanding problems in galactic evolution.”

Further study of these mighty outflows, which the researchers believe will only accelerate as their quasars suck in more material, could fill in more details about how the universe’s most energetic objects make (and break) entire galaxies.

How a pandemic prepares us for exploring and living on Mars

The hunt for a coronavirus vaccine | podcast

Earth crust is shaking astonishingly less due to Coronavirus Lockdown, Here’s Why