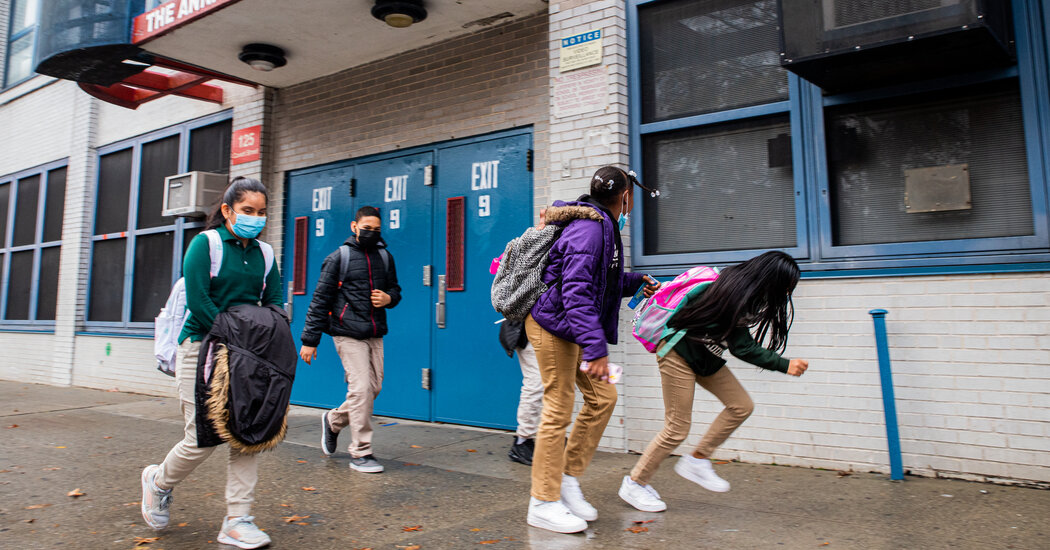 The news that hundreds of thousands of parents and educators had been awaiting arrived at 9:45 on Sunday morning, in a tweet from Mayor Bill de Blasio: New York City’s test positivity rate remained below 3 percent.

The city’s school system, which must close if the positivity rate hits a 3 percent seven-day average, would remain open another day. New Yorkers breathed a sigh of relief, for now.

But it was also clear that parents’ and teachers’ focus on that number would not let up. The fixation points to both the profound anxiety surrounding the fate of the school system — the nation’s largest — and the extraordinary challenge of operating schools in a pandemic that is again on the upswing.

Over the summer, Mr. de Blasio pushed hard to reopen classrooms, calling it a moral imperative and a vital step in the city’s recovery. But about seven weeks after he managed to restart the system, the mayor is facing fresh questions about how and whether to close it: Should he stick to the 3 percent threshold he set months ago, or should he revise it, given that recent data shows that schools seem to have relatively few infections?

New York City, one of the few big cities to return children to school buildings, has chosen a relatively conservative threshold for closure.

Several states have adopted higher levels, including New York, where Gov. Andrew M. Cuomo has said that schools across the state would have to close only when the test positivity in a region reaches 9 percent. In Iowa, Gov. Kim Reynolds has set the state’s closure threshold at 15 percent.

Debates about when and how to reopen schools come as America is experiencing a stunning surge in cases in most parts of the country, forcing some districts to either delay their reopening plans or cancel in-person classes altogether. The United States reported more than 159,000 new cases on Saturday alone.

A vaccine is unlikely to be widely available until the end of this school year, and it is still unclear whether schools will return to normal next fall, since the vaccines have so far mostly been tested on adults, not school-age children.

In recent days, Mr. Cuomo has suggested that the mayor re-evaluate his calculus, based upon scientists’ current understanding of virus transmission. Still, the governor has left most decisions about school reopening to individual districts, and the mayor doesn’t want to move the goal posts for safety now, officials said — particularly after the uproar in September, when he repeatedly pushed back the school reopening date.

Michael Mulgrew, the president of the New York City teachers’ union, has defended the threshold, saying it was “part of the plan” and should not be revised. “When the mayor told us about the 3 percent, we went to our doctors, and they said it was an appropriate number,” Mr. Mulgrew said in an interview on Friday.

Adding to parents’ concerns is the fact that Sunday is the deadline for families to decide if they want any in-person classes for their children — most likely the last chance to opt in for the entire school year.

The mayor’s messaging has been consistent: The 3 percent threshold is sacrosanct, meaning it is likely that schools will soon close temporarily.

“The 3 percent threshold is a strict standard, just like our mask standard and our school shutdown standard,” his spokesman, Bill Neidhardt, said. “That’s why the schools are safe to begin with.”

The future of New York City’s ambitious effort to offer in-person schooling at its 1,800 public schools hangs in the balance.

As of last week, about 300,000 children had received at least some in-person instruction; the vast majority of the city’s roughly 1.1 million students are still learning with online classes only. Most children are permitted to attend school in person just one to three days a week.

As of Sunday morning, the city’s average positivity rate stood at 2.57 percent, and the expectation is that the rate will only increase.

City officials are preparing for the worst.

On Thursday evening, Chancellor Richard A. Carranza sent an email to principals, asking them to prepare for shutdowns. That same day, Mr. de Blasio suggested that such closures could last for weeks. On Friday, the mayor encouraged parents to develop alternative plans for the likely end of in-person schooling this month.

With so much uncertainty, parents are left scouring the city’s latest numbers for clues: Was Friday’s alarming 2.8 percent average positivity rate artificially high? Could Saturday’s low daily rate have been an outlier, or a positive sign?

“We have a struggle ahead right now, I’m not going to lie to you,” Mr. de Blasio said Sunday during an appearance at a Brooklyn church. “But I do want to let you know school is open tomorrow, and that’s a blessing.”

On Friday, school administrators weren’t taking any chances. Teachers filled bags with books and papers in anticipation of teaching from home for weeks or longer. Some students cleaned out their desks.

Parents questioned whether the 3 percent metric was in fact the correct one, or just a relic from the earlier days of the pandemic, when scientists knew less about how the virus would spread in schools.

The mayor announced the metric over the summer, when it was still unclear if his administration could pull off reopening. At the time, the leader of the city’s teachers’ union was warning that schools would not be safe come fall, and threats of sickouts or even a strike loomed.

Mr. de Blasio said that he set the threshold intentionally low to give anxious parents and educators a clear signal that the city was taking safety seriously.

A City Hall official said the threshold was developed with the city’s public health experts, as part of a package of school safety measures that they set out to make the strictest in the world: mandatory mask requirements, six feet between desks, school buildings at half or even a third capacity and a monthly testing regimen.

The city also predicted then that a 3 percent positivity rate would correlate to roughly 1,000 positive tests a day, which would inevitably cause alarm throughout the city.

Reassuring the teachers’ union, the United Federation of Teachers, was crucial at a moment when the mayor did not appear to have the political support needed to reopen schools.

But to the city’s surprise, very little transmission happened in schools. The latest data shows that random testing since October has produced a positivity rate of just .17 percent.

“Schools have been safer than even our most rosy predictions in City Hall, but that’s because we set standards based on public health, not public opinion,” Mr. Neidhardt said.

A rising chorus of parents is now arguing that the threshold should be closer to the state guideline of 9 percent. But Anna Bershteyn, a professor of population health at N.Y.U.’s Grossman School of Medicine, said, “It’s really difficult to know what the right number should be.”

Isaac Weisfuse, a medical epidemiologist at Cornell University, said he hadn’t seen officials make a persuasive case for the 3 percent threshold, or for any other threshold, particularly since some neighborhoods continue to have very low positivity rates.

Some principals and teachers who were wary of reopening have said they are devastated that schools are likely to close again.

“Probably not a popular take on this website right now, but I’m really sad about this upcoming shutdown and the loss of in person learning time for our students,” Michael Perlberg, the principal of Middle School 839 in Brooklyn, wrote on Twitter.

“I’ve really gotten to know the faces and stories during entry, exit and throughout the day, of our absolute most vulnerable and it is really, really heartbreaking,” wrote Amir Tusher, an assistant principal at the Community Health Academy of the Heights in Manhattan.

Still, some teachers said they thought the mayor should stick with the threshold.

“I do think it’s a matter of time until the virus spreads in our schools,” said Mike Loeb, who teaches at a Bronx middle school. “In our incredibly unpredictable world, which the mayor has not helped to improve much, sticking with the standard set months ago would bring some consistency.”

Several dozen parents and children held a rally in Lower Manhattan on Saturday in support of keeping schools open even if the city hits the 3 percent average in the coming days.

Ellene Hu, who lives in Manhattan, attended the protest because her son has loved being in his kindergarten classroom five days a week.

“We know now that schools aren’t superspreaders,” she said, adding that she’s frustrated that her son’s school is likely to close before gyms and indoor dining.

“Can we re-look at the data, and re-look at what contributes to the pandemic and prioritize accordingly?” she said.

On Saturday, Mr. Cuomo suggested that New York City should reconsider its plans.