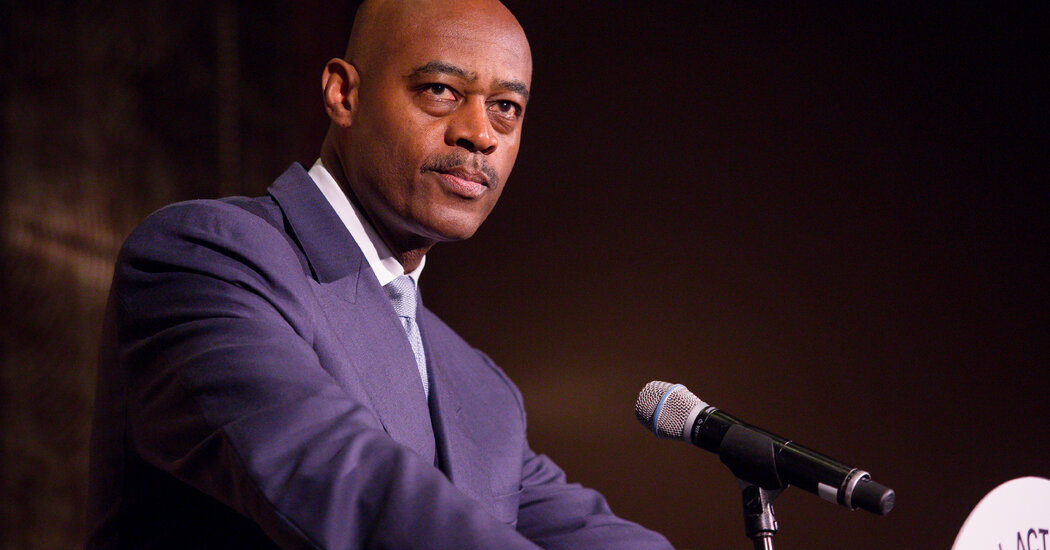 Weather: Rain becomes heavy; the day starts in the 60s but cools quickly after midday. A mostly sunny weekend, with highs near 60.

During the pandemic, business leaders in New York have been eager for one of their peers to run for mayor.

Now, one of the highest-ranking and longest-serving Black executives on Wall Street has thrown his hat in the ring.

On Thursday, that executive, Raymond J. McGuire, said he would be leaving his position as the vice chairman at Citigroup to join the growing field of candidates who are seeking the Democratic nomination next year. (City laws prevent Mayor Bil de Blasio from running for a third consecutive term in the November 2021 election.)

Mr. McGuire is well known in the financial world, but as political newcomer he will need to make inroads with voters, according to my colleague, Jeffery C. Mays, who covers local politics.

To learn more about Mr. McGuire’s bid and what to expect from the race, I spoke with my colleague Emma G. Fitzsimmons, our City Hall bureau chief. Our interview has been edited lightly for brevity and clarity.

Q: What are your thoughts on Mr. McGuire’s entry into the race?

A: He seems like a really interesting candidate and could speak to voters who want someone with business experience and who want to elect the second Black mayor in the city’s history.

After the Black Lives Matter protests this year, some Democrats believe the city doesn’t need another white man as mayor. But the progressive wing of the party also has a lot of power right now, and they might think Mr. McGuire is too conservative. They might be skeptical of him since he is an executive who has worked with big corporations.

Who are a couple of front-runners in the race, and what are their visions for New York City?

Two elected officials who are viewed as leading candidates are Eric Adams, the Brooklyn borough president, and Scott M. Stringer, the city comptroller.

Mr. Adams did a “back to work” subway ride this week to urge New Yorkers to return to the system, and he’s Black and a former police officer, so he talks a lot about criminal justice issues.

Mr. Stringer has been trying to establish himself as one of the most progressive candidates in the race, and he emphasizes his knowledge of fiscal matters.

What issues do you expect the race to focus on?

A month after a mass shooting at a house party in Rochester, N.Y., few questions have been answered — including who the shooter was. [NBC New York]

Although many performance spaces and community centers are closed, people are finding creative ways to connect through virtual events and programs. Here are suggestions for maintaining a New York social life this weekend while keeping a safe distance from other people.

Stay indoors and tour this virtual fair. Daily from 6 p.m. to 9 p.m. through the end of the year, the exhibition previews artists lined up for in-person fairs in 2021 and beyond.

On Friday at 5 p.m., watch movie shorts, poetry videos, web series episodes and more during this virtual event hosted by the Queens Underground and the N.Y. International Arts Festival. Participants can also vote for their “fan favorite.”

Purchase a ticket ($20) for the livestream on the event page.

Join Antwaun Sargent, a New York-based curator and writer, on Saturday at 10 a.m. as he discusses his book “The New Black Vanguard: Photography Between Art and Fashion” with Pippa Oldfield, head of programs at Impressions Gallery in England.

Register for the free Zoom call on the gallery’s website.

Metropolitan Diary: Getting around

In a rather cramped McDonald’s on Second Avenue, I watch as a woman in a wheelchair rides backward away from the counter and down the narrow aisle to the front of the store. There, she backs into a tiny space near the entrance.

Later, around the corner, the same woman boards the M96 that I am taking to the West Side.

I notice her again at the north corner of Broadway, waiting to cross 96th. Vehicles pass and turn around us as the crosswalk timer counts down.

Suddenly, the woman’s chair shoots backward with great speed over the sidewalk cutout and into the street. Fortunately, the way is clear.

As I cross, I notice she has a foot in a cast, propped up in the leg rest of her rather low-tech chair. All this time, she has been using her good foot to propel herself in reverse. I realize that she must have deliberately kicked herself into the street.

I keep my eyes on her. With barely a glance over her shoulder, she gets ready to kick herself backward over Broadway.