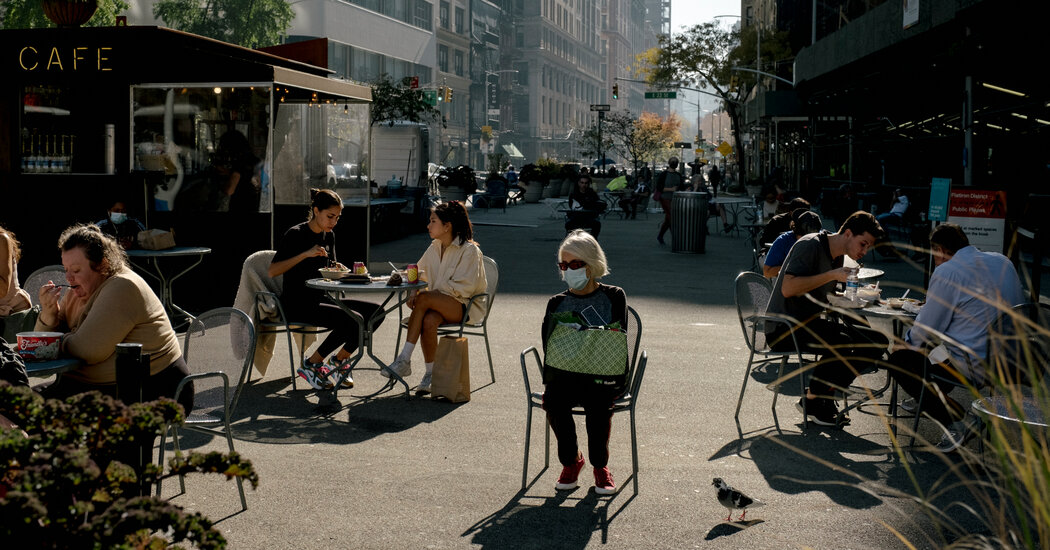 Weather: The rain will gradually taper, but the temperature will sink to the mid-50s by midafternoon.

New York City is at a critical juncture once again.

The seven-day average rate of positive test results has been steadily rising. On Wednesday, that rate was 2.52 percent — a number last seen in early June. Hospitalizations and virus deaths have been ticking upward, too, city data shows.

With numbers rising across the five boroughs, Mayor Bill de Blasio wrote on Twitter: “This is our LAST chance to stop a second wave.”

Here are five takeaways from a regional rise in cases:

On Wednesday, Gov. Andrew M. Cuomo ordered a series of statewide restrictions to begin on Friday.

The governor said that private indoor and outdoor gatherings would be limited to 10 people and that gyms, bars and restaurants must close daily at 10 p.m.

Most of Staten Island is designated a “yellow zone”

The borough’s seven-day positive test rate is the highest in the city, and two Staten Island ZIP codes have risen above 5 percent.

On Wednesday, Mr. Cuomo declared most of the borough a “yellow zone,” meaning that among other limitations, places of worship could operate only at 50 percent capacity.

Health officials have not said why specifically they are seeing more cases on Staten Island, where Republican leaders have fought restrictions by Democrats who control the city.

Joseph Borelli, a Republican city councilman who represents Staten Island, suggested two factors: police officers and firefighters, many of whom live on the island, could get the virus at work and bring it home; and his borough’s closeness with New Jersey, which was seeing a huge rise in cases.

Mayor Bill de Blasio has said that he would shutter schools if the city exceeds a 3 percent rate in positive tests over a seven-day rolling average. City Hall officials told my colleague Eliza Shapiro this week that the mayor would stick to his promise, and that plans for how to reopen schools after a shutdown were in the works.

But not everyone is on board with the possibility of a school closure, which would affect both staff members and the approximately 300,000 students who receive some in-person instruction. Some parents have noted that the positivity rate in schools is very low — just 0.17 percent, according to the most recent data.

[N.Y.C. schools may close again, a grim sign of a global dilemma.]

There have been no signs of relief for New York City’s collapsing real estate sales market. The decline has already cost the city and state more than $1.4 billion in lost tax revenue, according to a report released on Thursday by the Real Estate Board of New York.

The steepest declines in residential sales have been in Manhattan, which has also seen a drastic drop in average rental prices, down nearly 9 percent from this time last year, according to the brokerage Douglas Elliman. During the virus’s peak in New York, many of the borough’s wealthy residents fled to the suburbs and second homes.

New restrictions are also in place across the Hudson

New Jersey reported 3,078 new cases on Wednesday and 15 virus-related deaths. The state has a seven-day average positivity rate of 7.95 percent.

Starting today, restaurants and nightclubs must end indoor service at 10 p.m., and high school sports teams are barred from traveling to out-of-state tournaments.

In Newark, the state’s largest city, 19 percent of people tested over three days last week were found to have the virus. The mayor, Ras J. Baraka, has implemented a 9 p.m. weekday curfew for residents in three ZIP codes, and indoor and outdoor gatherings are capped at 10 people until at least December. Team sports are canceled, and nursing homes are barred from accepting visitors for the next two weeks.

“I know we are all tired,” Mr. Baraka said in a statement, “but the virus is not.”

What Happens to Some L.G.B.T.Q. Teens When Their Parents Reject Them

Pandemic Pushes N.Y.C. Cabbies to the Brink: ‘I Can’t Hold On’

Where the Party Never Sleeps

Two residents of an Upper West Side hotel that is sheltering the homeless said they were offered money or food in exchange for supporting their relocation. [New York Post]

Dr. Anthony S. Fauci, the nation’s top infectious-disease expert, has won awards of national and global acclaim. But this week, he received an honor that hit particularly close to home, being named a “Brooklyn Covid Hero.”

The award is part of a series organized by the borough’s president, Eric L. Adams, to thank Brooklynites who are going above and beyond during the pandemic.

“I thought it was extremely heroic of Dr. Fauci to challenge his boss, the president of the United States, and to prioritize the safety of the American people,” Mr. Adams said in an interview.

In his acceptance speech on Tuesday, Dr. Fauci said, “Whenever people ask me how I put up with all the stuff that goes on in Washington, I have two words for them: Brooklyn strong.”

Dr. Fauci spent most of his childhood in south Brooklyn, first in Bensonhurst and later in Dyker Heights, where his parents owned a pharmacy. He was a graduate of Our Lady of Guadalupe Catholic Academy in Brooklyn, Regis High School in Manhattan and Cornell University’s medical school.

“I’m a Brooklynite through and through,” Dr. Fauci said at the ceremony, which he attended virtually. He concluded with this message to New Yorkers: “A vaccine is on its way, folks, so hang in there, hang tough. We’re going to get over this together.”

How refreshing it was to slide into a seat on an Amtrak train from Washington to New York on a scorching summer day.

Not only did the car have great air-conditioning, but in the seat next to me was a woman who was reading a newspaper and folding it into proper quarters as carefully as if she were doing origami.

We were silent for the first part of the trip until I got up the courage to ask who had taught her this technique.

“My sixth-grade teacher in a little town in Pennsylvania,” she said, without hesitating. “She taught us to always read the left-hand column first, and how to fold it.”

I asked her why she would need to fold a newspaper that way in a small town where, presumably, there was plenty of elbow room.

She said that her teacher had often traveled to New York and then taught the class what she observed there. She said she had learned how to tie scarves the same way.