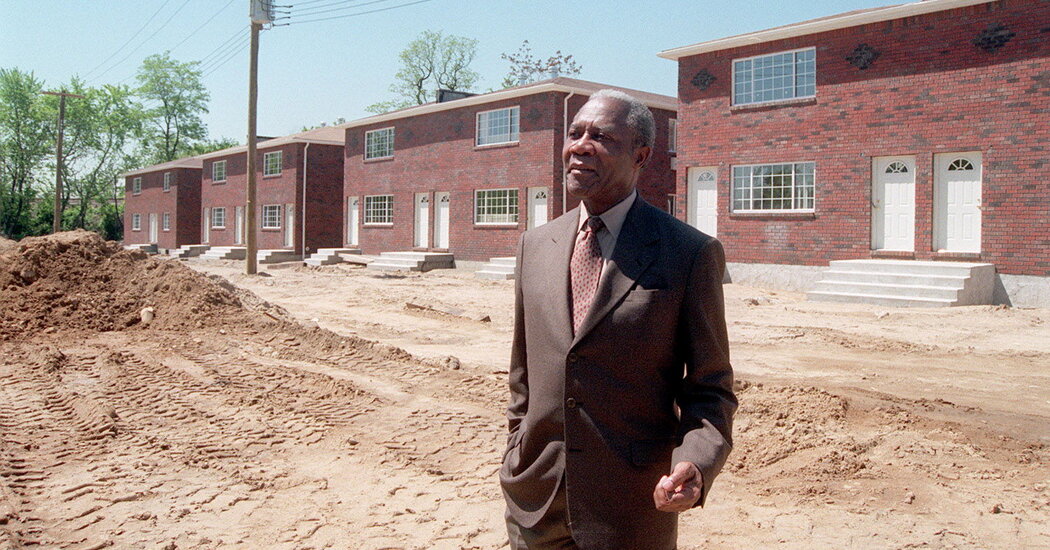 Archie Spigner, a New York City councilman who was a political kingmaker in southeast Queens for a half-century, helping fellow Black politicians climb the ladder and coaxing jobs and construction projects into his district, died on Oct. 29 in, of course, Queens. He was 92.

His wife, Leslie Spigner, said the cause was cancer. He died at Long Island Jewish Medical Center.

Mr. Spigner represented his home base on the City Council from 1974 to 2001, the last 15 of those years as the deputy to the majority leader Peter F. Vallone. But in his district he was nobody’s second in command. For 50 years — from 1970 until his death — Mr. Spigner ran the United Democratic Club of Queens and served as a district leader, positions that gave him power to help shape the Democratic Party’s local leadership.

In an area that reliably voted Democratic, a nod from Mr. Spigner all but assured election. As Donnie Whitehead, a local campaign manager, put it, Mr. Spigner’s blessing was as essential to a candidate in southeast Queens as Christ’s was to a Christian hoping to gain entry to Heaven.

In 2009, managing a rival campaign in a Democratic primary, Mr. Whitehead had vowed to change that. “No more only getting elected through Archie,” he declared.

“He was the godfather of politics in southeastern Queens,” said Representative Gregory Meeks, the area’s House member.

His influence extended to any Democrat, of any race, running in his area. At Mr. Spigner’s funeral, Senator Chuck Schumer attributed his own 1998 Senate victory in part to Mr. Spigner’s support.

As a local-minded city councilman, Mr. Spigner helped shepherd the sale of the oft-criticized Jamaica Water Supply Company, New York City’s last privately owned waterworks, to the city government in 1997, bringing down costs for residents of southeast Queens. To spur local business, he successfully pushed for the construction of a permanent building for York College, part of the City University of New York, in the Jamaica section; a subway extension to downtown Jamaica; and a regional headquarters of the Social Security Administration.

But some who sought to change the status quo in city politics saw a downside to Mr. Spigner’s clout and successful promotion of pet projects.

“He got all of that by never causing any problems for the leadership,” said Ronnie Eldridge, who served with Mr. Spigner on the City Council. “He was not open to any great reforms.”

The website of the Coalition for the Homeless, a nonprofit group, describes the loss of those units as “the most significant single change in New York City’s housing stock during the emergence of modern homelessness.”

S.R.O. policy was one of several issues on which Ms. Eldridge opposed Mr. Spigner. Yet she fondly recalled socializing with him when she was an executive of the Port Authority of New York and New Jersey in the 1970s and ’80s.

“Every time the Port Authority had a party, Archie was there,” Ms. Eldridge said, adding, “Archie was just a very affable man.”

Archie Hugo Spigner was born on Aug. 27, 1928, in Orangeburg, S.C., to Walter and Estelle (Kitt) Spigner. His father was a house painter, his mother a church volunteer. His family moved to New York when Archie was 7, and he grew up in Harlem.

From the start he had Black political mentors. As a young bus driver engaged in union activism, Mr. Spigner drew the attention of the labor leader A. Philip Randolph. Mr. Spigner was charged with forming a Queens branch of Mr. Randolph’s Negro American Labor Council.

While looking for a meeting place for his group, Mr. Spigner met Mr. Browne, who was running for the State Assembly. Mr. Browne took Mr. Spigner to the local Democratic club and introduced him to the district leader Guy R. Brewer.

Mr. Spigner would become an essential operative for both men as they blazed a path for Black candidates in Queens politics. Mr. Brewer was also elected an assemblyman, and when he stepped down as district leader, he anointed Mr. Spigner his successor.

At Mr. Brewer’s urging, Mr. Spigner attended college, graduating with a bachelor’s degree in political science from Queens College in 1972.

In 1974, however, the two men became rivals when both sought the City Council seat representing southeast Queens. The local club held a secret ballot to resolve the dispute, and Mr. Spigner won by a single vote. He stayed on the Council until 2001, when the introduction of term limits forced him out.

Mr. Spigner’s first marriage, to Christine Townsend, ended with her death in 2007. In addition to Leslie Spigner, his second wife, he is survived by a son from his first marriage, Philip; a grandson; and two great-granddaughters.

Even though he ran the Democratic clubhouse, in the St. Albans section of Queens, Mr. Spigner did not treat it as a personal fief and went about his business without fanfare. His office was a little-used room in the back, and rather than frequenting expensive steak houses, he held morning meetings in Queens diners.

“He wasn’t big on trying to drain anybody’s pockets to get a $100 dinner,” said Leroy Comrie, a state senator and one of Mr. Spigner’s many protégés. “He just wanted to deal with the issue.”