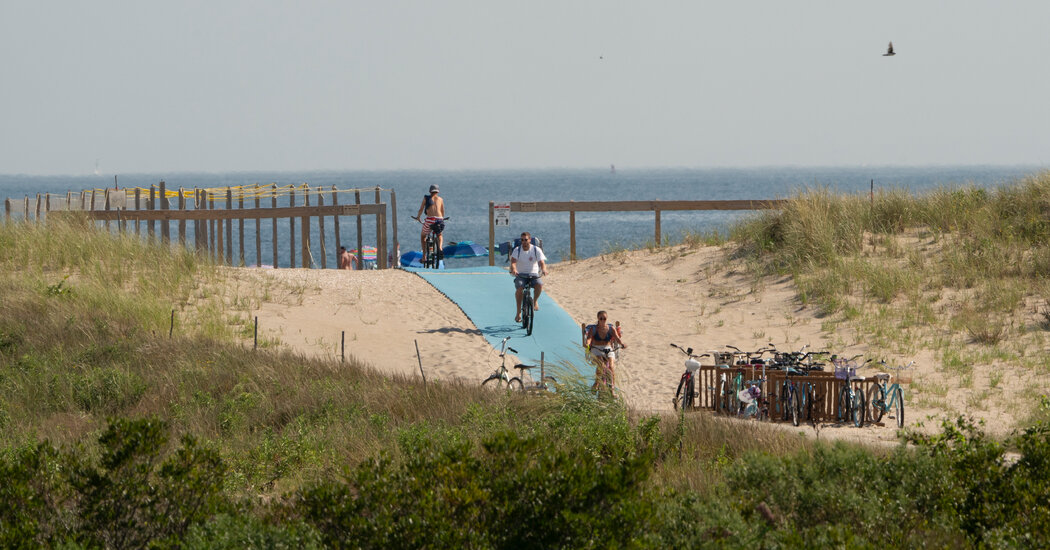 Jane and Ed Deacy, who both contracted the coronavirus this summer, say their support for President Trump has only been bolstered by the way he has handled the pandemic, and even by his own battle with Covid-19. Their loyalty has also not been shaken by the president’s style in his combative debate with Joseph R. Biden Jr. or at his recent rallies.

“I think he has done a phenomenal job dealing with an unknown virus,” Ms. Deacy said. “His record of the past three and a half years stands, and his accomplishments have not changed.”

Like most of their neighbors in their predominantly white, middle-class community, the Deacys voted for Mr. Trump in 2016, and enthusiastically intend to do so again on Nov. 3. But the Deacys do not live in a solidly red state.

They occupy an unusual slice of Trump country in New York City — Breezy Point, a private beach community in Queens where residents enjoy glimpses of the Manhattan skyline and display banners with slogans like, “Yes, I’m a Trump girl. Get over it!”

The community has long been home to police officers, firefighters and other first-responders, many of whom own modest houses that have been in their families for generations. They embrace Mr. Trump, who hails from a wealthier part of the borough, and hold fast to local traditions that include conservative politics and outspoken support for the police and the military.

Their fealty to the president stems in part from a prevalent view that the city outside their gates is being driven into the ground by hopelessly progressive Democrats under whose leadership crime is rising and respect for law enforcement is dropping. The enclave has few residents of color, and skepticism of the Black Lives Matter movement is widespread.

While Mr. Trump’s claim that New York City has fallen prey to anarchy may be greeted with scorn by many New Yorkers, it resonates in Breezy Point.

The few liberals in the community say they love the gorgeous setting, but can grow weary of an insularity that at times has provoked claims of hostility to outsiders or even prejudice. Still, residents like the Deacys, who are both retired from the New York Police Department and have lived in Breezy Point since 1984, said they were disgusted with New York’s leadership. The Deacys said they would likely move to Florida soon for this very reason.

“What’s happened to New York is a crying shame and they should be held accountable for it,” said Mr. Deacy, referring to Mayor Bill de Blasio and Gov. Andrew M. Cuomo, who are both Democrats.

Many of their neighbors agree. Tom Long, 74, said he appreciated that Mr. Trump had remained as aggressive as ever in recent weeks.

“That’s what got him elected,” said Mr. Long, who leads the Queens Conservative Party. “I’m not voting for his hairstyle, his personality or his warmth and charm. I like what he’s done and what he’ll do the next four years.”

He added, “We’re watching the Democratic Party move more to the left all the time.”

While much of the city has become more liberal, he said, “Breezy Point is what New York City used to be.”

And so when residents turn out to vote in November at their local polling place — traditionally the St. Thomas More Catholic Church — it seems highly likely that most will again cast their ballots for Mr. Trump.

“I don’t know anyone who voted for Trump in 2016 who would not do it again,” said Bob Turner, a former Republican congressman who has lived in Breezy Point for 40 years.

Breezy Point is a private community, with roughly 2,800 homes on land managed by a cooperative that also furnishes services typically provided by the city. In the 2016 presidential election, Mr. Trump garnered 77.5 percent of the vote in Breezy Point. Hillary Clinton swept the city overall with 78.4 percent.

A short drive away in Queens — perhaps the most ethnically diverse place in the nation, if not the world — are predominantly Black Democratic strongholds areas where Mr. Trump received less than 5 percent of the vote in 2016.

In a city where a majority of residents are people of color, the two-square-mile Breezy Point remains 92 percent white. Locals refer to it as the “Irish Rivera” because 62 percent of residents claim all or partly Irish ancestry.

The enclave has its own security force and prides itself on the kind of resilience and self-sufficiency on full display after the terrorist attacks of Sept. 11, 2001, which killed more than 30 Breezy Pointers, many of them firefighters, and after Hurricane Sandy, which in 2012 destroyed about 350 houses and damaged hundreds more.

Other areas of the city voted overwhelmingly for Mr. Trump in 2016. In Staten Island, he won a majority of the vote; in some Orthodox Jewish sections of Brooklyn, he topped 80 percent.

The Breezy Point cooperative has rules about home sales that can make it difficult for outsiders to become homeowners. Prospective buyers have to put at least 50 percent down in cash, and get recommendations from three residents and approval by its board, residents said.

The requirements have helped solidify the feel of the community. Many houses are passed down in families for generations or sold to neighbors.

Breezy Point has often kept a low profile, but this summer its political leanings became more visible thanks to banners towed by planes above city beaches in the Rockaways.

“Rockaway and Breezy Pt Support the NYPD,” read one banner, which was paid for by local community fund-raising and caused division in the Rockaways, an oceanfront section of Queens that has become increasingly popular with more liberal newcomers.

While some locals cheered the banner, others criticized it on social media as a divisive attack on the Black Lives Matter movement, whose demonstrations across New York City helped galvanize support in Breezy Point for Mr. Trump.

As the protests raged, Blue Lives Matter flags flew proudly in Breezy Point, where many residents either have police officers in their family or know someone who does.

Sebastian Danese, 42, a police officer who lives in the neighborhood and supports Mr. Trump, said that while he agrees with the Black Lives Matter movement’s struggle for equality, many of the demonstrations in the city demonized the police.

“It’s not along racial lines — like we’re white, so we support Trump,” he said. “The other side is saying things that make us uncomfortable, like defund the police.”

He dismissed the notion that local support for Mr. Trump was born out of racism.

“When we run into a burning building or help a victim of a crime, we’re not thinking about race,” he said. “I don’t care what color they are or who they vote for, and I think the vast majority of people down here feel same way.”

The widespread support for Mr. Trump leaves residents like Anne Hoerning, a liberal who moved to Breezy Point from Park Slope, Brooklyn, in 2004, “somewhat on the fringe,” she said.

“It’s a package,” she said. Support for Mr. Trump is “so embedded, and I don’t find it intellectual. It’s like a knee-jerk reaction.”

Cary Sheren is a longtime seasonal resident and a lifelong Republican who voted twice against Barack Obama, but opposes Mr. Trump. She said she was surprised to see so many Trump flags planted in the sand next to beach chairs this summer.

Outsiders, including a friend of hers from Manhattan, have also been startled by the shows of support for the president.

She said that after her daughter Piper placed a Black Lives Matter flag next to her chair on the beach one day this summer, their neighbors on either side hung Blue Lives Matter flags on their homes. The Sherens countered by posting a “Hate has no home here” sign.

Of course, the banners are seen by relatively few outsiders, since access to Breezy Point is largely restricted to residents and their guests, and is protected by a private security force, a front gate and electronic security gates that restrict local streets and parking lots.

People who wander in are often spotted quickly by residents as outsiders and told to leave by security.

Those gates reflect a stark divide, acknowledged Mr. Turner, the former congressman. He said that if he put a Trump bumper sticker on his car, it might attract vandals in other parts of the city, but would be left untouched in Breezy Point.

“I don’t know if there’s a lot of other neighborhoods in New York where that exists,” he said.

Likewise, Mr. Danese, the police officer, said he would not wear his Blue Lives Matter T-shirt in many parts of the city.

“If you openly advertise that you support Trump, it puts a bull’s-eye on you,” he said.