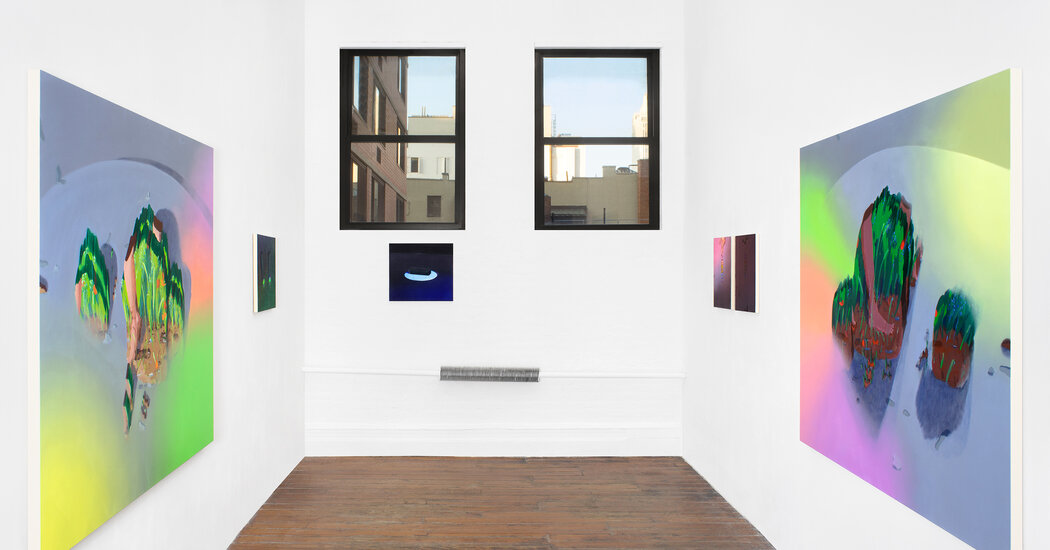 Walking around TriBeCa galleries recently felt strangely, blessedly, heartbreakingly close to normal. Some bars and restaurants — like the upscale diner in Cortlandt Alley — remained closed, but Lower Manhattan is ablaze with art. Just across the street from that empty diner, at Andrew Kreps Gallery, I visited Kim Dingle’s overhead views of restaurant tables, which she made in the 2000s while operating a restaurant in Los Angeles, and over at Canada I thrilled to Joan Snyder’s delicate but explosively colorful abstractions. (Note that both shows close Oct. 17.)

Luhring Augustine has opened a branch on White Street with a killer show of watercolors and found object sculptures by the Brazilian artist Lucia Nogueira (through Oct. 31), and a new project called Broadway has opened with a show by the Indigenous video artist and photographer Sky Hopinka. Ortuzar Projects is hosting a retrospective of Lynda Benglis’s sculptural works (through Dec. 3) in concert with uptown’s Cheim & Read gallery.

Vikky Alexander has incisive photo collages and eerie glass sculptures at Downs & Ross (through Oct. 25); Peter Freeman’s rotating group show (through Dec. 19) of 20th-century masters from Agnes Martin to Walker Evans is particularly strong; and you’ll want to catch Steve Mumford’s captivating graphic journalism at Postmasters (through Oct. 31). Below are six more exhibitions in or near TriBeCa — from Varick Street to the Bowery, more or less — that have stayed with me.

There are no surviving images of the 24 Afro-Brazilian figures — some historical, some legendary — who populate the paintings in Dalton Paula’s “A Kidnapper of Souls,” his North American solo debut. (Mr. Paula, a Brazilian painter and multimedia artist who makes work about the African diaspora, did appear in the 2018 New Museum Triennial.) He modeled them, instead, after residents of a settlement originally founded by escaped slaves in the Brazilian state of Goiás.

Each figure, sensitively rendered in oil and gold leaf against a green or turquoise background — a style inspired by turn-of-the-century portrait photography — straddles a subtle lacuna: The 2-foot-by-18-inch panels they are painted on are made by screwing two narrow canvases together, and you can just make out the seam. It’s an understated gesture that carries a lot of weight, bringing to mind not just the syncretic origins of Afro-Brazilian culture, or the continued fusion of those origins with contemporary Brazilian life, but also the enduring marks left by cleaving people away from their homes and families.

The conceptual artist Kayode Ojo continues to arrange found objects with a masterly touch in “The Aviator,” a sophomore show at Martos named after Martin Scorsese’s 2004 biopic of Howard Hughes. A phoropter, the device optometrists use to determine a patient’s prescription, hangs at eye level near the gallery entrance, at once a metaphor for art and art itself. (Let the artist shape your vision if you dare!) Or is it a comment about structural biases?

Things only get more slippery as Mr. Ojo goes on to arrange prop handcuffs, chrome-plated music stands, replica pistols, open Swiss Army knives, and other tools with reflective surfaces in minimal but well-ordered piles. Because the placement of all these objects appear to be as significant as the items themselves, they all become terms in a single, all-encompassing visual language, supple and thought-provoking but endlessly ambiguous.

The inaugural group show at this new project space, founded by the artist Onyedika Chuke in his own basement art studio, is a powerful mix of explicit politics and formal verve. Three of Emory Douglas’s graphic cover designs for the Black Panther newspaper remain as arresting as they were when he composed them 50 years ago. The Miami-based artist Yanira Collado contributes a spare, evocative sculpture reminiscent of a rooftop antenna, and a series of black-and-white photographs that document performances by Alicia Grullón are surprisingly striking in their own right. Two monumental works on paper — one, by William Cordova, a polymath of patterns, features a grayscale check pattern, and the other, by the Houston artist Rick Lowe, has a tidal wave of black marker lines on a golden yellow ground — are tacked directly to the walls, adding an extra burst of studio-visit excitement to an already energetic roundup.

A miniature is a refuge from the trials of real life, an otherworldly little kingdom you can enter with your eyes. But the palm-size landscapes in the ceramist Mary Carlson’s “Eden,” most of them sourced from the peripheries of old master paintings, are different. “Eden Trees (after Bruegel),” a thick brown puddle of desert under a cluster of lumpy trees, is precisely rendered and shiny with glaze; “Eden (after Cranach)” features a trim little cave perfect for some tiny hermit; and in “Reservoir Blue Hills,” the only piece from life, the land is even more luscious blue than the water. Weaving around the low white pedestals that these nine little patches of paradise reside on, you may suspect that the Kingdom of Heaven, while surely at hand, is in need of some protection.

How would the world look if you could stand outside time? That’s the heady question behind “One Second Per Second,” a lush but tightly focused suite of paintings by the young Brooklyn artist Dana Lok. In the largest two, “Causal Wedge (Front)” and “Causal Wedge (Back),” a veil of neon mist parts to reveal a single foot trampling through the mud. Simple orange butterflies — perhaps a reference to the “butterfly effect” — flutter around in the tall grass. Jagged receding borders at the top of this vision suggest that it’s not just one instant Ms. Lok has her sights on, but a contiguous train of them. But what makes the concept work is that she doesn’t linger over the details. It’s just an uncommon way of highlighting what is, after all, the heart of most figurative painting — the strange and magical problem of fixing a moment in time.

After finishing a body of work about the life and death cycle, the New York painter Megan Marrin, in need of some conceptual recovery, began researching spas and wellness. But she eventually narrowed her focus to a single emblematic object and put together a small but memorable show, “Convalescence,” comprising four ominous paintings of the Edwardian sanitarium fixture known as the rib cage shower. Filling their tall and narrow canvases more or less exactly, these devices look like skeletons — almost alien but weirdly familiar — in cross-sections of shadowy flesh. They bring to mind all sorts of disquieting questions about luxury, technology and the sexual undercurrents of the industrial world. Do we shape our environment or does it shape us? Is the desire for comfort a product of the death drive? And just what are we after, anyway, when we design a bathroom? The paintings’ bilious colors and sticky-looking surfaces only amplify their psychological effect. 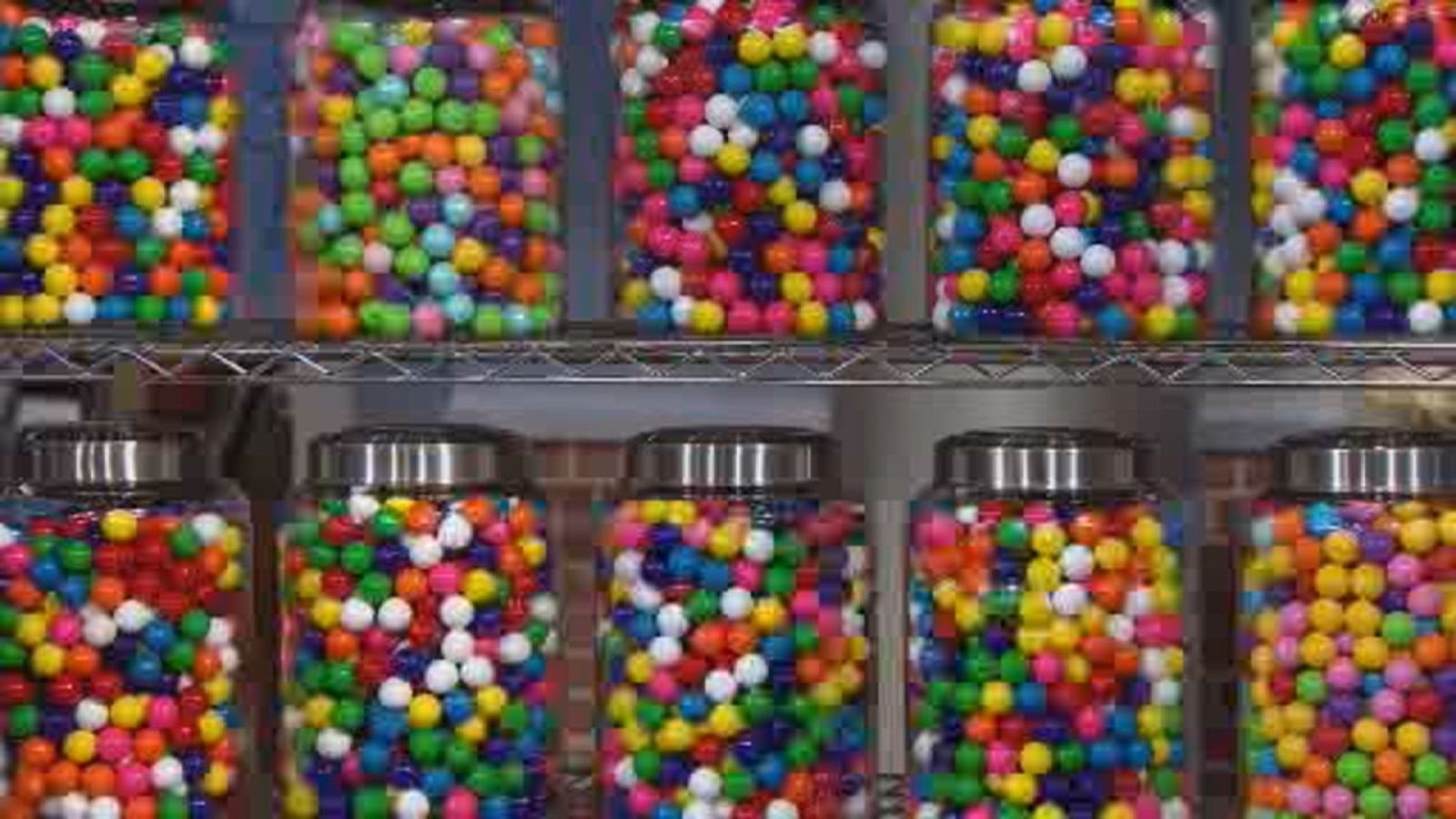 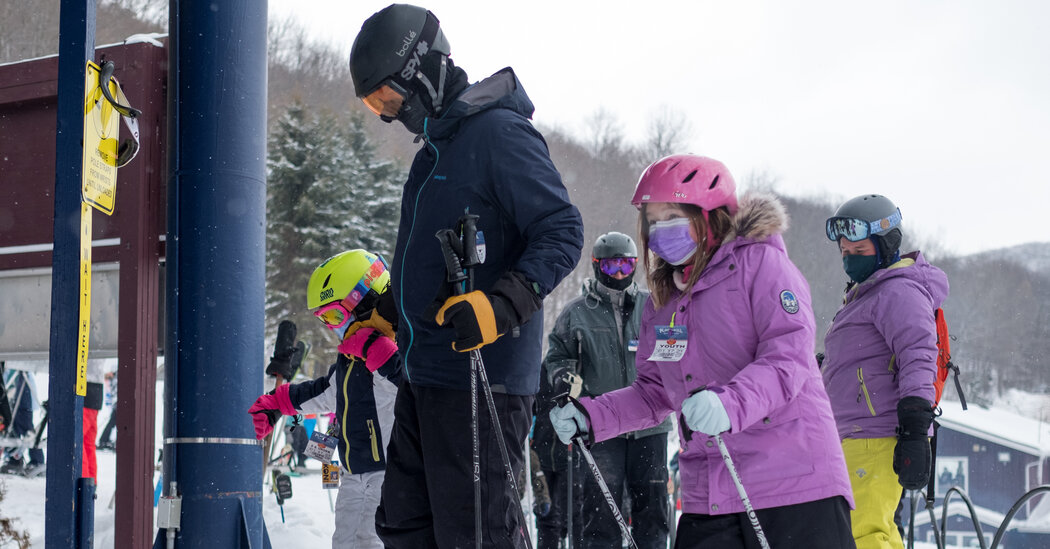