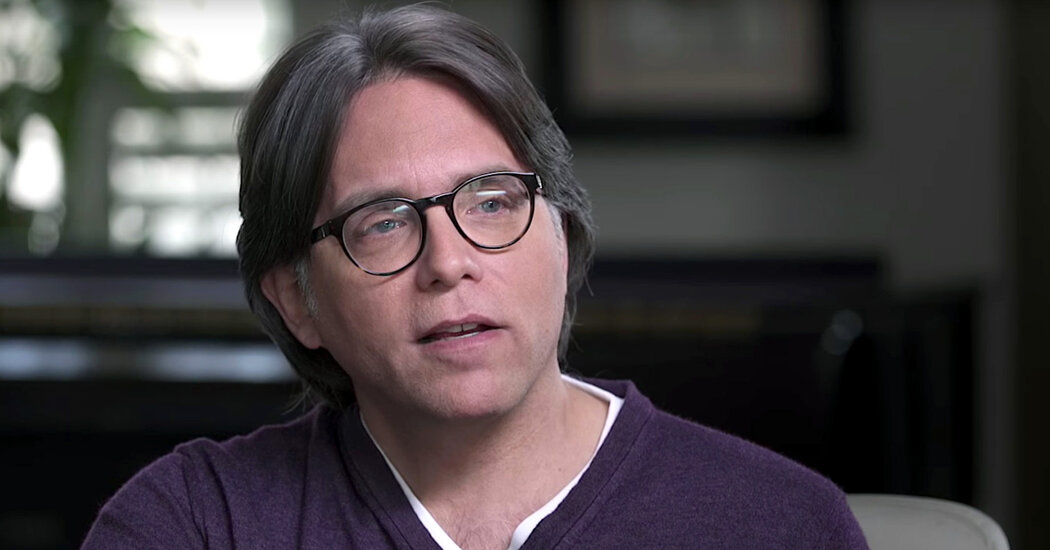 Keith Raniere was convicted last year on charges stemming from his running of a cultlike group called Nxivm, in which a harem of sexual “slaves” were branded with his initials on their pelvises and coerced into having sex with him.

These women were taught to revere him and were ordered to maintain near-starvation diets to achieve the physique he found desirable. One of the victims was 15 years old when the abuse began.

Mr. Raniere, 60, who has been in a Brooklyn jail since his conviction, is scheduled to be sentenced on Tuesday for federal crimes including racketeering and sex trafficking. He faces up to life in prison.

Here is a timeline of some events in Mr. Raniere’s path toward his sentencing.

Since then, an estimated 18,000 people enrolled in the group’s workshops, including its “Executive Success Programs.” Most participants only took a few classes, but some members became ardent followers of Mr. Raniere, calling him “Vanguard” and regarding him as the most ethical man in the world.

Former members sought an investigation into the group.

By 2017, several former members had asked New York State authorities to investigate Nxivm. The complaints focused on a secretive subgroup within the organization called The Vow or D.O.S. — an acronym for a Latin phrase that roughly translates to “Lord/Master of the Obedient Female Companions.” The members were branded and some were assigned to have sex with Mr. Raniere.

The sisterhood, which was billed as an empowerment group, comprised circles, each led by a “master” who recruited “slaves.” In time, the subordinates also recruited their own “slaves.”

The women were required to hand over “collateral” — embarrassing and incriminating information, including nude photographs — that would be publicly released if they disclosed the existence of D.O.S.

After a report about the branding appeared in The New York Times in late 2017, the authorities began a criminal investigation and Mr. Raniere moved into a villa near Puerto Vallarta, Mexico.

At the request of U.S. officials, Mr. Raniere was arrested in Mexico, where he had been living for five months. At a hearing in Texas, he was sent to Brooklyn to face charges that he forced women to engage in sex.

In an affidavit filed as part of the criminal complaint, an F.B.I. agent stated that Mr. Raniere had maintained a “rotating group” of 15 to 20 women with whom he maintained sexual relations.

In an eight-page letter, prosecutors said that Mr. Raniere “has spent his life profiting from pyramid schemes and has otherwise received financial backing from independently wealthy women,” like Clare and Sara Bronfman, heirs to the Seagram’s liquor fortune.

The case against Nxivm widened.

Ms. Salzman, who was known to the group’s followers as “Prefect,” was charged with identity theft and altering records to influence the outcome of a lawsuit against Nxivm.

In Federal District Court in Brooklyn, Ms. Salzman admitted that she had planned “invasions of privacy” involving email accounts and the altering of recordings “edited to remove sections we did not want to turn over” to opponents in a lawsuit.

Nancy Salzman was scheduled to be sentenced on July 10, 2019. Her sentencing, however, has since been pushed to a later date, as was Lauren Salzman’s.

In Federal District Court, Ms. Mack sobbed as she admitted that she had lured women into D.O.S. by saying they would be part of a female mentorship program. Instead, officials said, she had recruited them into the society as “slaves,” and some women were required to have sex with Mr. Raniere.

She faces up to 20 years in prison on each count to which she pleaded guilty. She was scheduled to be sentenced on Sept. 11, 2019, but the date has since been postponed twice.

Ms. Bronfman pleaded guilty to two charges related to identity theft and immigration fraud. The youngest daughter of Edgar Bronfman, the former chairman of Seagram Company, she was known as Mr. Raniere’s legal enforcer but was not a member of D.O.S.

On that same day, Nxivm’s bookkeeper, Kathy Russell, pleaded guilty to one count of visa fraud.

In a six-week trial, prosecutors presented a damning case against Mr. Raniere.

Former members said that as Nxivm’s curriculum progressed, Mr. Raniere used psychological manipulation to indoctrinate his followers into obedience. Critics faced retaliation and lawsuits, creating an internal culture with no tolerance for dissent.

But much of the trial focused on D.O.S., which prosecutors said Mr. Raniere created in 2015 as part of a scheme to provide him with a flow of submissive women.

One former member, identified only as Nicole, described how on one day Mr. Raniere took her to a house, told her to disrobe, blindfolded her and tied her down to a table. He then asked her questions about her sexual history while another person performed oral sex on her, she said.

Lauren Salzman testified that the women in D.O.S. were subjected to punishments, including being whipped with a leather strap or being asked to stand barefoot in the snow.

Jurors deliberated less than half a day before finding Mr. Raniere guilty of all seven counts, including racketeering, sex trafficking, conspiracy, forced labor, identity theft, sexual exploitation of a child and possession of child pornography.

Ms. Bronfman was sentenced to 81 months in prison.

Nine of Nxivm’s victims spoke at the sentencing hearing for Ms. Bronfman in Federal District Court in Brooklyn, where Judge Nicholas G. Garaufis gave her a sentence that was longer than prosecutors had requested.

At the time, Ronald Sullivan, a lawyer for Ms. Bronfman, said he would appeal the sentence, calling it an “abomination.”

Ms. Bronfman had seemingly not wavered in her loyalty to Mr. Raniere, writing in an August letter to Judge Garaufis that “Nxivm and Keith greatly changed my life for the better.”

Mr. Raniere will return to court for sentencing.

Mr. Raniere’s sentencing will be the culmination of his fall from grace and is expected to include hours of statements from victims. Prosecutors have said in court papers that he should serve a life sentence, a punishment that is typically reserved for cases involving deaths or murders.

Mr. Raniere has accused Judge Garaufis of corruption and has demanded a new trial, which the judge has denied twice.

“He is not sorry for his conduct or his choices,” Mr. Raniere’s lawyers wrote in a court filing in September.