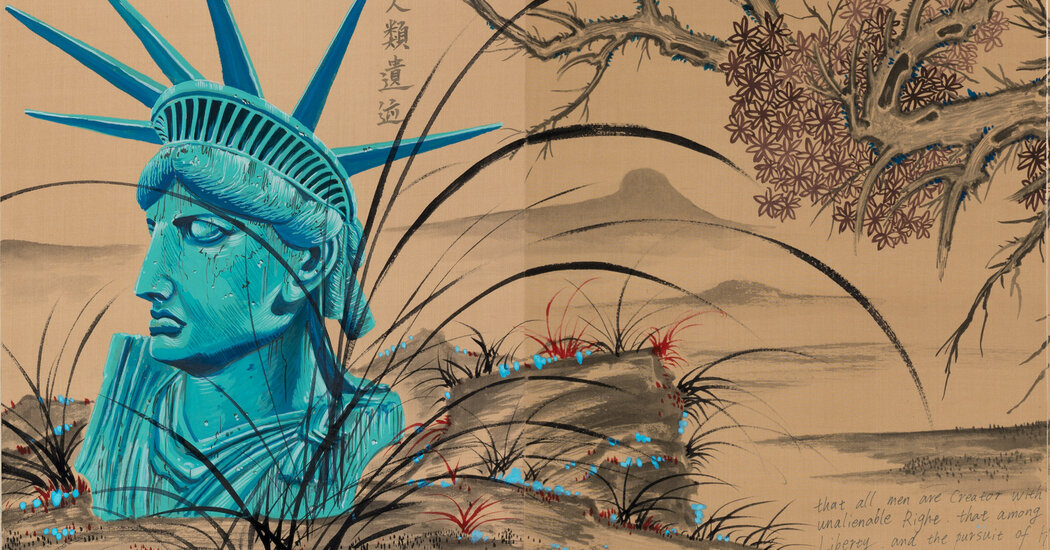 When Michelle Yun and Boon Hui Tan, the curatorial team behind the first-ever Asia Society Triennial, began assembling their exhibition five years ago, they imagined a city-spanning arts event that would give the Whitney Biennial and the New Museum’s Triennial a run for their money.

“We wanted it to be part of the city,” Mr. Tan said. The exhibition as they envisioned it could not be confined to the walls of the Asia Society. “It had to be bigger.”

What they did not envision was a pandemic that would throw their plans into upheaval — while also making the show’s mission even more imperative. After being postponed from its June opening because of Covid-19, the reimagined triennial will open next week at venues across New York City.

Ms. Yun and Mr. Tan have adapted the schedule, scale and format of the exhibition.

“There were some difficult moments,” Ms. Yun said, adding that they are grateful and “so happy to move forward … albeit in a different structure.”

The inaugural triennial is aptly titled, “We Do Not Dream Alone,” after a line from Yoko Ono’s 1964 art book “Grapefruit” — “A dream you dream alone may be a dream, but a dream two people dream together is a reality.”

The triennial is meant to showcase “new work by artists who have not had major presentations” in museums or the bigger galleries, Mr. Tan said, and those who have blossoming careers elsewhere but a “less robust presence in United States,” Ms. Yun added, like the collaborative Japanese artists Ken and Julia Yonetani, who have exhibited in Europe, Singapore and Australia.

But some of the featured artists will be familiar to New York audiences, as a number of them live and work in New York or are represented by galleries with a strong presence in the city. These include the Chinese artist Sun Xun; Shahzia Sikander, an artist born in Pakistan who now lives in New York, and the Palestinian-American artist Jordan Nassar.

Part one of the triennial will run from Oct. 27 through Feb. 7, 2021, with much of the programming at the Asia Society Museum on the Upper East Side. Other venues include the Park Avenue Malls at 70th Street, Times Square and the New-York Historical Society on the Upper West Side.

If pandemic conditions permit, the second phase, from March 16 through June 27, 2021, will include performances with live audiences at venues such as David Geffen Hall at Lincoln Center.

The triennial, which is free to the public, was already a glint in the eye of Mr. Tan when he became director of the Asia Society Museum in 2015, after serving as director of the Singapore Art Museum in his native country.

When he moved to New York, he was disappointed to discover that the city he’d thought of as a global art capital was disconnected from the cultural cross-pollination that was happening around the world, especially in Asia.

In New York, he found “the representation of non-Western, non-European, non-American art — Asia in particular — is so narrow,” he said. “I was very stunned that many of the incredible and exciting works I was seeing at biennials and museums in London, in Paris, in Berlin, in Beijing, in Shanghai, in Singapore was not here.”

“I did a snapshot of Asian art exhibitions, both traditional and contemporary, compared to the larger field,” Ms. Yun said. She found that fewer than 10 percent of museum and major gallery exhibitions in New York City were devoted to art by Asians or the Asian diaspora, living or dead.

For five years, Ms. Yun and Mr. Tan crisscrossed the globe to find and commission work from and about Asia and its diasporas, assembling a slate representing more than 40 artists and art collectives from 21 countries. (The Asia Society considers Asia to comprise roughly 30 countries in the Asia-Pacific region).

By the time Covid-19 brought New York to a standstill in March, “the question had already been sort of bubbling” as to whether or when the show could go on “because China and other parts of Asia was starting to be affected,” Mr. Tan said.

The pandemic created enormous logistical challenges. The postponement was problematic for many of the artists, especially those with projects meant for Governors Island, which had been a key venue for the triennial, and which is typically open May through October.

Some of the artists “had spent over a year or a couple of years working with us to create immersive site-specific installations that then were not able to be translated to the Asia Society space,” Ms. Yun said, “To say there was not some heartache would not be true.”

And the nearly global halt to travel has meant artists, many of whom would have been making their first visit to the city or to the United States, have been unable to install their work (some installations have instead been coordinated via FaceTime) nor introduce it to the public.

Not having artists on hand to contextualize their commissions led the team “to bump up dramatically” the online programming, both video and other interviews with participating artists, before and during the triennial, Mr. Tan said.

He and Ms. Yun were determined to push forward with the event this fall rather than cancel it, as so many other cultural organizations have done. One reason was a sense of responsibility to the city and to the arts community at large.

Gonzalo Casals, who was named New York’s commissioner of cultural affairs in March just as Covid-19 was gripping the city, said he considered the triennial a “big milestone to look forward to in terms of bringing our community back from the darkest days of the pandemic.”

Importantly for the curators, those dark days included an explosion of anti-Asian rhetoric and xenophobia in America. A study from the Pew Research Center in July found that, since the pandemic began, Asians and Asian-American adults have been more likely than other ethnic or racial groups to report being subjected to racial and ethnic slurs or jokes.

There has also been an increase in reports of physical attacks, including being coughed at or spit on.

These events “spurred the intent and the passion to make sure” the triennial wouldn’t be canceled, Ms. Yun said.

“I grew up as an Asian-American” in Michigan, she explained, where she was born after her parents immigrated from China. “There were not a lot of other Asian-Americans or other minorities, for that matter,” which made her keenly aware of a certain cultural invisibility, as well as of “how Asian-Americans have been used as scapegoats at certain moments,” she said.

The triennial, he said, is “a testament to the power of art to resist the isolation and closing of our minds in these uncertain times when governments and public institutions seem to fail us.”