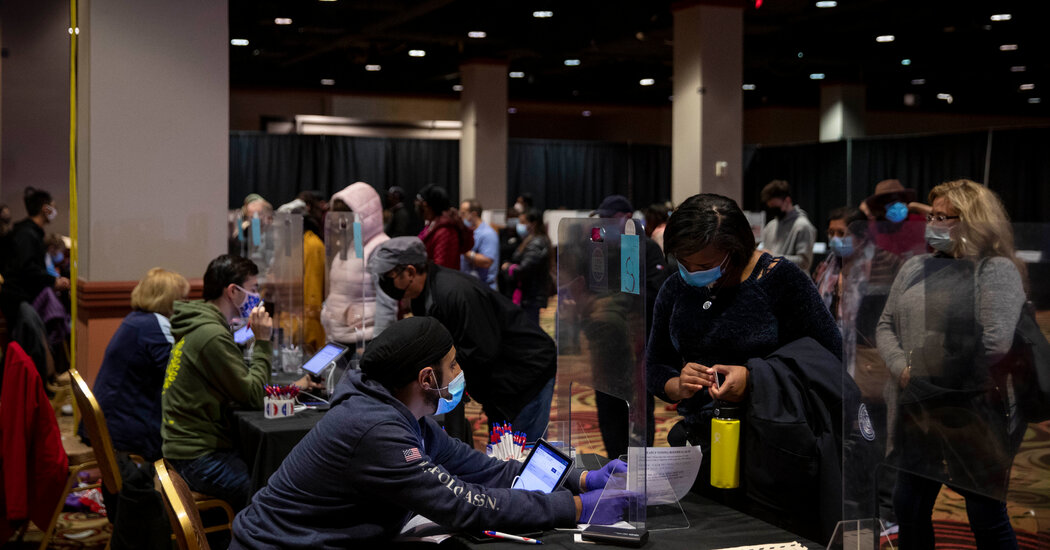 They voted in high schools and middle schools, in churches and museums, in Madison Square Garden and Barclays Center and even in a casino in Queens. In many instances, voters waited in line for hours.

It was the city’s first foray into early voting in a presidential election, and the intensity of interest signified an ardor for change in a largely Democratic city racked by the worst economic and health crisis in at least a generation.

But the early voting period, the third attempt by the city Board of Elections at early voting since the state legalized the practice last year, was far from perfect.

The 88 poll sites were not enough for the roughly five million registered voters, and the poll hours were inconsistent and insufficient. The distribution of polling sites was also uneven: There was one site for every 100,000 registered voters in several places in Queens, Manhattan and Brooklyn. Yet in Staten Island, no voting site had to contend with more than 44,000 registered voters.

New Yorkers, including the co-chair of the state Board of Elections, made multiple forays to polling places to vote early, before the long lines dissuaded them.

Voters reported lines that lasted three, even four hours. Upon returning to his Brooklyn neighborhood to vote, Mayor Bill de Blasio himself waited three hours to cast his ballot. All that standing caused him back pain.

The long lines may have driven down early-voting turnout: As of Saturday, about 3.3 million New York State residents had voted in person or by absentee ballot — 42 percent of the state’s 2016 turnout, behind other states.

In Texas and Hawaii, early-voting turnout exceeded the total vote from 2016. In Colorado, 2.5 million residents had voted, or 87 percent of the state’s total 2016 turnout, according to the U.S. Elections Project.

Despite the frustration, there were still many moments of celebration and accomplishment.

In Southeast Queens, which has been a hot spot for the coronavirus, Councilwoman Adrienne E. Adams said she felt “electricity in the air” when she visited her neighborhood’s polling site at York College on the second day of early voting last Sunday.

The line was so long that Ms. Adams postponed voting for two days, but she said that didn’t stop her from joyfully marking the moment. “I was literally running down the street with my camera just grinning and screaming, and people were waving,” she said.

She was not alone in her fervor.

“This has got to be the most passionate national election that I’ve experienced since maybe 1968,” said John Mollenkopf, 74, a political scientist who directs the City University of New York’s Center for Urban Research, referring to the race in which Richard M. Nixon defeated Hubert Humphrey after the assassinations of Martin Luther King Jr. and Robert F. Kennedy.

Thousands of New Yorkers took it upon themselves to participate in the process. Throngs of young, energized residents signed up as poll workers. José Andrés, a chef at World Central Kitchen, asked restaurants in its network of providers to hand out free meals at polling sites to those waiting in lines. So far, the organization’s Chefs for the Polls program is on track to distribute up to 60,000 slices of pizza, empanadas and other local foods to voters in New York City.

“We didn’t really know what to expect — New York City is not on the list of historically voter-suppressed areas,” said Nate Mook, the chief executive of the nonprofit, which distributes philanthropic funding to local restaurants which, in turn, deliver food to people in need. “But we also knew that there was a lot of demand, there was early voting and there were limited early voting sites.”

New York City’s Board of Elections is controlled by party leaders in the city’s five boroughs. Its problems are well chronicled. In the June primaries, the board threw out tens of thousands of absentee ballots for technical errors. In September, a vendor sent out as many as 100,000 incorrect ballot packages.

In recent days, both Gov. Andrew M. Cuomo and Mayor de Blasio have called for substantial reforms to the city’s board, whose structure is enshrined in the state Constitution. Liz Krueger, the state senator who chairs the finance committee, is planning to hold hearings on the board in early December.

“Nobody wants to ever give up political power, and nobody wants to give up what they think might be somehow a partisan edge in a partisan process,” she said. “But I’d like to point out to my friends and colleagues, they are wrong. When we can’t operate an election successfully in the City of New York in the 21st century, a city perceived of as being a one-party city, we must be doing something wrong.”

Still, early voting represented a triumph for voting rights activists, who have long lamented the hurdles to casting ballots in New York State.

And the city elections board did make adjustments on the fly: It added an 89th site at a college on the Upper East Side of Manhattan and expanded voting hours. The extended hours seemed to cut down on lines. When Mr. Mollenkopf went to vote at the Brooklyn Museum on Friday, in the rain, he found no line.

On Sunday, with just hours left before early voting ended, New Yorkers continued to turn up in large numbers.

At the Resorts World Casino in Queens, poll workers pointed and yelled, “Casino straight, early voting here!” as people arrived. Despite the rain, a long line formed outside the entrance.

Pierre Pamphile, 41, had no umbrella. He said he was worried lines would be longer on Election Day, when more than 1,200 regular polling sites will open.

“I’m out here because there were a lot of people who tried to forfeit my right to vote as an African-American,” he said. “People camp out for Jordans, so why can’t do the same for voting?”